This African chant mourns the loss of Olaudah Equiano, an eleven-year-old boy who, in 1755, was kidnapped from his home in what is now Nigeria. He was purchased by a captain in the British Royal Navy, was later sold to a Quaker merchant in the Caribbean, and in 1766 bought his freedom. He wrote his autobiography in 1789, giving readers a rare glimpse of how it felt to be kidnapped from home in Africa and to survive onboard a slave trader's ship. In his autobiography, Equiano wrote, "There are few events in my life that have not happened to many." By this, he referred to the kidnapping of millions of free West Africans by slave traders, who then sold them to wealthy merchants and plantation owners. 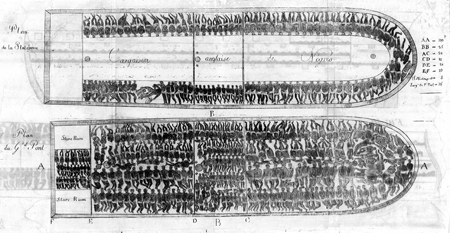 The Africans who had been stolen from their homes were placed onto ships that took them to South America, the Caribbean, or North America. This trip across the Atlantic Ocean was known as the trans-Atlantic slave trade and is sometimes called the "Middle Passage." Conditions for the captured men, women, and children aboard the ship were horrible. Up to a thousand people would have to survive for two to five months largely belowdeck, in quarters so tight that they could barely move. Besides being unbearably cramped, the deck had no ventilation, windows, or way to dispose of waste. Disease was rampant. Food was limited. Violence and torture were common. Equiano wrote:

The closeness of the place, and the heat of the climate, added to the number in the ship, which was so crowded that each had scarcely room to turn himself, almost suffocated us. This produced copious perspirations, so that the air soon became unfit for respiration, from a variety of loathsome smells, and brought on a sickness among the slaves, of which many died.

Those who did survive the Middle Passage were sold at auction upon arrival in their new country. These formerly free people were now enslaved, the property of another person.

The first Africans in America arrived in Jamestown, Virginia, as indentured servants in 1619. Indentured servants were laborers who were under contract, or indenture, to work for another person for a set number of years. When the contract expired, the laborer was free. Later, Africans brought to America arrived as slaves. Slaves were laborers who had no contract or rights and had to work for their owners for their entire lives. North Carolina adopted its first slave code—defining the social, economic, and physical places of enslaved people—in 1715; the Fundamental Constitutions of Carolina approved in 1669 had made slavery acceptable. Enslaved people had been shipped directly from Africa to the colony as early as the 1680s, but because the coast was dangerous for large ships, most of North Carolina's enslaved people were purchased from slave owners in Virginia or South Carolina. At the time of the American Revolution, most of the enslaved people in North Carolina lived in the eastern part of the colony and the majority lived on large plantations, where their work was critical to the state's cash crops and economy.

The long journeys of many enslaved people ended on large farms or plantations in the United States, like Stagville and Somerset in North Carolina—now State Historic Sites. On the plantation, the owner dictated much of their lives. Enslaved people were told what work to do, when to do it, and where to live. Harriet Jacobs (1813–1897), born into slavery on a plantation in Edenton, wrote a narrative in which she described many of the horrors endured by enslaved people, such as this instance of a family being separated:

I saw a mother lead seven children to the auction-block. She knew that some of them would be taken from her; but they took all. The children were sold to a slavetrader, and their mother was bought by a man in her own town. Before night her children were all far away. She begged the trader to tell her where he intended to take them; this he refused to do. How could he, when he knew he would sell them, one by one, wherever he could command the highest price? I met that mother in the street, and her wild, haggard face lives today in my mind.

The largest plantation in North Carolina was Stagville, established in 1787 by the Bennehan and Cameron families. Located in parts of what are now Orange, Durham, Wake, and Granville counties, Stagville in 1860 had more than nine hundred enslaved people living on its thirty thousand acres. Most of the people enslaved there worked in the fields growing crops such as tobacco, wheat, corn, potatoes, and sweet potatoes. Children as young as age seven were expected to work. 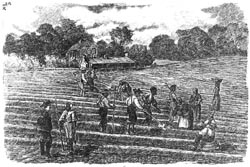 At Stagville, there were two types of slave quarters. One style was a one-room house approximately fifteen feet square, in which an entire family would live. A more unique style of house was built on the plantation around 1850. These were two-story, four-room houses. One family of approximately five to seven people lived in each of the rooms. After they finished their labor for the owner, the enslaved people would return to these quarters to do their own work. Men would tend their gardens while women cooked a big meal that everyone would share. Children would help the adults with their work as well as doing their own chores, such as fetching water from the well, tending to the animals, or minding their younger siblings. Cy Hart, born into slavery at Stagville, was interviewed in the 1930s as part of a Works Progress Administration project. Discussing his life on the plantation, Hart said that he tended chickens and turkeys, and the other stock as he got older.

After the work was done, the adults might tell the children stories or oral histories, help them make simple toys, or teach them games such as mancala. It was during this limited community time that the elders passed along African traditions to the next generation.

Modern North Carolinians carry on these traditions. The people taken from their homes in Africa were not alone during their terrible journey on the Middle Passage. They carried memories of their culture, which they re-created in their new homes and which survives today. Many words Americans use today, such as daddy, buddy, banjo, gumbo, okra, and turnip, originate in West African languages. The last few words bring to mind foods that originated in West Africa. Other foods include field peas, gourds, and yams. Musical instruments such as banjos and drums also came from Africa.

The United States banned further imports of slaves from Africa in 1808. Slavery would remain legal until the end of the Civil War in 1865, but from 1808 on, the slave population only grew through natural increase. If a person's mother was enslaved, then that person was also enslaved. Based on the 1860 census, there were 361,522 African Americans (slave and free) living in North Carolina, as well as approximately 630,000 white people and slightly more than 1,100 American Indians.

The Africans who were brought to North Carolina hundreds of years ago overcame many difficulties to make this state home. Thanks to their contributions and to those of their descendants, our state is the richer.

Diagram of the Decks of a Slave Ship, 1814; Image Reference JCB_01138-1, as shown on http://www.slaveryimages.org, sponsored by the Virginia Foundation for the Humanities and the University of Virginia Library.