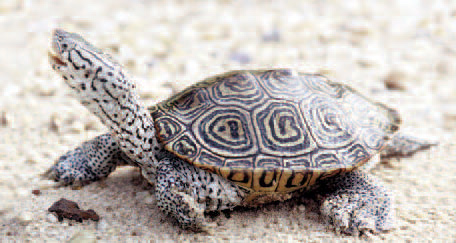 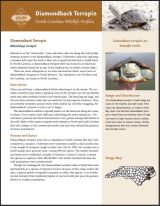 Mating occurs in the water in spring. Eggs are laid in late April–July. Clutch size varies from 4–18 oblong eggs. Eggs laid in chamber dug 6 in.–8 in. below surface; nesting occurs in the daytime during high tides. Incubation periods are dependent on temperature and vary from 61–104 days for certain nests. Age at sexual maturity is estimated at 5–8 years. 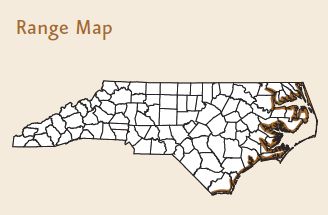 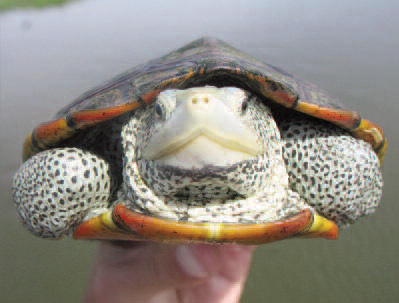 Often you will hear a diamondback before observing it in the marsh. The terrapin’s powerful jaws make a popping noise as the terrapin eats the periwinkle snails and other mollusks found in the marsh grass. The hind legs are large, and the toes have extensive webs that are useful for its semi-aquatic existence. They are powerful swimmers and are feisty when picked up. Actively struggling, the diamondback is known to bite a toe or finger.

The diamondback exhibits a spotted pattern on the head and along the scutes, or plates. Even experts have difficulty identifying the seven subspecies. The coloration, patterns and shell characteristics vary greatly among individuals in the wild. Many of the captive terrapins were released in North and South Carolina after the collapse of the commercial market and may have diluted the genetics of native populations.

Diamondback terrapins were once so abundant in North Carolina that they were considered a nuisance. Fishermen were sometimes unable to haul catches due to the weight of terrapins caught in their nets. But by 1920, the terrapin was a much sought-after gourmet item, costing $90 per dozen. The market boomed and farms were established (notably in Beaufort, Carteret County) to breed the species in captivity. After World War I the market declined because the wild populations were overharvested.

Though not endangered, the diamondback terrapin today is listed both state and federally as a species of Special Concern. Because of this status within the state, a special permit is required to possess or collect this species. Loss of habitat and mortality from incidental capture in nets and crab pots pose the greatest threats to terrapin populations.

Diamondback terrapins are adapted for life in brackish and salt water. They typically have high site fidelity, meaning they live in one area throughout their lives, and these areas include protected waters behind barrier islands, salt marshes, estuaries and tidal creeks, and flats hidden among the marsh and cord grass. Natural predators include alligators, sharks, raptors, otters, toad fish, and crabs. At high tide, they swim about the marshes in search of food; at low tide, they are found nearly or entirely buried in the mud or hidden under drift. Diamondback terrapins can hold their breath from 45 minutes (during summer) to five hours.

Sometimes groups of this species are found on exposed mudflats, basking in the sun. Mating occurs in the spring when individuals move from open lagoons into small canals and ditches. The larger female will carry her male counterpart upon her back during the courtship ritual. Hatchlings emerge from their eggs in the autumn and sometimes remain buried in the nest over winter or emerge and bury in the mud into the next spring. Adults also hibernate during the winter, submerged in the mud of tidal creeks in deep water where the mud is less likely to freeze. With the onset of warmer weather, hatch lings seek out and remain in dense cover such as marsh grasses and tidal wrack, presumably until they reach a larger size. Diamondback terrapins are mainly carnivorous and while their favorite food is periwinkle, they also eat other mollusks, crustaceans, insects, annelids and the occasional tender shoots or rootlets.

Diamondback terrapins are beautiful turtles. Because of their special concern status, diamondback terrapins are protected from harvest in North Carolina. Humans affect terrapin populations in very pronounced ways. Terrapins are drowned each year in crab pots, especially derelict traps lost in the water. These death traps remain in the water where terrapins are attracted to the bait or to each other. If an individual enters a crab pot, others will follow and eventually drown. One crab pot, found in North Carolina, contained 29 decomposing terrapins. Adult females are typically too large to enter crab pots so adult males and young females are usually the casualties. Terrapin biologists advocate the use of BRDs (bycatch reduction devices), which prevent smaller terrapins from entering crab pots. The increase in raccoons and other predators associated with human development may increase adult, nest, and hatchling depredation. 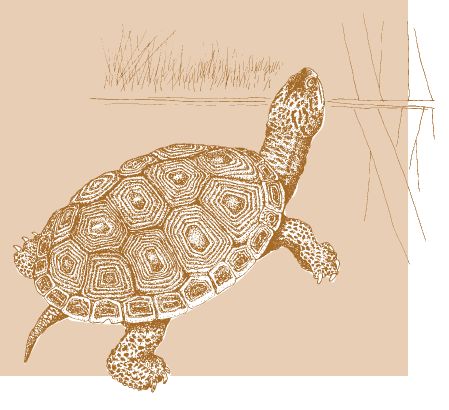 The diamondback terrapin is not only a species of concern in North Carolina but is also a priority species in the N. C. Wildlife Action Plan. Priority species are targeted for conservation action in the hopes of preventing the diamondback from becoming endangered. Management of this species is a challenge for NCWRC due to its habitat preferences and involves a coordinated effort among multiple agencies and partnerships to provide continued protection from the threats to its survival. These threats include derelict crab pot drowning, pollution, and development pressures.

Photos by NCWRC and courtesy of Ohio University. Illustrated by J.T. Newman.
Produced by the Division of Conservation Education, N.C. Wildlife Resources Commission.