John Knox Witherspoon, Presbyterian pastor and educator, was the only child of attorney David, of New Bern (d. 1801), and Mary Whiting Jones Nash Witherspoon (d. 5 Feb. 1800), the widow of Governor Abner Nash. He was the grandson of the Scottish-born Reverend Dr. John Witherspoon (1723–94), the only clergyman to sign the Declaration of Independence and president of Nassau Hall, N.J. (College of New Jersey, later Princeton University) and his first wife Elizabeth Montgomery (d. 1789) of Craighouse, Ayrshire. Young Witherspoon was born at Pembroke Plantation, across the Trent River from Tryon Palace, where his half brother Frederick Nash (later chief justice of North Carolina) had been born a decade before in 1781. Although it has been frequently claimed that he was in direct line of descent from the Scots Calvinist John Knox, modern genealogical research indicates that this was not the case.

Orphaned at about age nine, the boy had generally unsatisfactory experiences at two preparatory schools—in Baskenridge, N.J., and at New Bern. He was eventually placed under the guardianship of his half brother Frederick, "of a settled disposition," and sent to the Reverend Abner W. Clopton's preparatory school in Chapel Hill, where in 1808 he was enrolled in The University of North Carolina. In September 1809 he was briefly suspended because of a bell-ringing prank in which he was apparently not directly involved. In 1810 he was graduated with an A.B. degree, second in a class of three. Witherspoon read law in Frederick Nash's Hillsborough law office for a time and was "duly admitted to the Bar," but influenced heavily by members of the Kollock family and by Dr. Robert Hett Chapman, president of The University of North Carolina, he decided to pursue a career in religion instead. 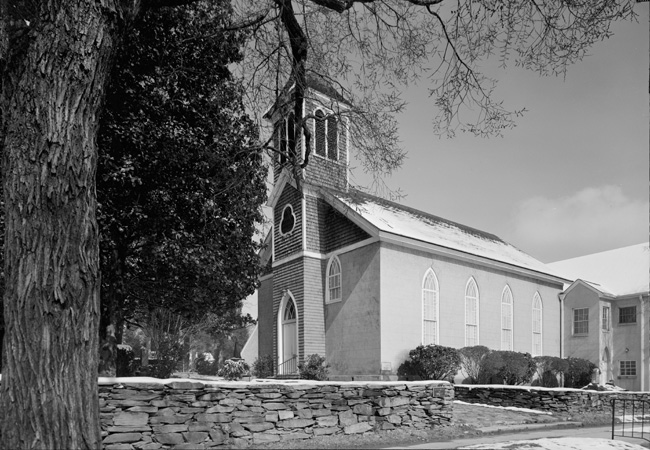 On 1 July 1813 he married Susan Davis Kollock (21 Dec. 1793–31 Mar. 1854), of Elizabethtown, N.J., the daughter of Captain Shepard and Susan Arnett Kollock and the sister of Mrs. Frederick Nash. From 1814 to 1816 he pursued his theological studies at Elizabethtown and Princeton. By the early summer of 1816, at age twenty-five, he returned to Hillsborough to assume a double charge, the pastorate of the newly built Presbyterian church and the principalship of the closely allied Hillsborough Academy.

Despite his youth the Reverend Mr. Witherspoon's family and church connections automatically secured for him immediate and almost unlimited prestige in North Carolina and throughout the country. He was in constant demand to fill pulpits and to organize new churches such as the Presbyterian Church of New Bern in 1817. Early biographical sketches note that he was granted an M.A. in 1815 or 1816 by the College of New Jersey as well as by The University of North Carolina. Appointed to the University of North Carolina Board of Trustees in 1817, he served until 1834.

Witherspoon inherited a sizable estate from his parents, and in 1817 his half sister Ann's estate also came to him. On 26 July 1817 he bought a house in Hillsborough and carried out very considerable repairs there. Somewhat later he purchased two adjoining tracts one and a half miles south of the town, on one of which he erected a comfortable Piedmont farmhouse and a whole cluster of outbuildings including a schoolroom. This new establishment served as both a country home and his own private boarding school for boys.

Sometime after 1819 Witherspoon apparently terminated his connection with the Hillsborough Academy, perhaps because of differences with trustees or assistant teachers as to educational philosophy. At any rate, after a single session of the new school, which had opened in early July 1826, a disastrous fire on 1 Jan. 1827 completely destroyed the Witherspoons' rural home and its contents, including all but one volume of the invaluable old records of Orange Presbytery, which Witherspoon, as stated clerk, had temporarily in his keeping. Although the house was promptly rebuilt, the money losses involved an estimated $3,000, the first of a long series of financial reverses for the Witherspoon family, which by July 1827 included seven children: Frederick Nash (1 Apr. 1814), Susan Kollock (1 July 1815), John Knox (Sept. 1816), Henry Kollock (20 Feb. 1820), David Brainerd (10 Feb. 1822), George Burgwyn (18 Mar. 1826), and Mary Nash (9 July 1827).

In an affectionate, though reticent sketch, written after John's death, Frederick described his half brother as socially affable and graceful, with a melodious, sweet voice (mentioned elsewhere as "silvery") that could fill every corner of the little Presbyterian church, and with a marked gift for extempore speaking. Although Witherspoon was an enormously successful teacher with an excellent memory and a talent for calling up precisely the right illustration to illuminate a point, he was not a bookman or an intellectual in the usual sense. During his lifetime he wrote a number of religious articles, most of them controversial in character, including a rare little pamphlet, published by Hillsborough printer Dennis Heartt in 1825, reviewing a sermon preached before the Bible Society of North Carolina by Bishop John S. Ravenscroft, and two exegetical papers, "On the Right Interpretation of the Word of God," which appeared under the pseudonym "Knox" in the Charleston Observer of 30 Jan. 1836 and 6 Feb. 1836, as well as various essays in the Philadelphia Presbyterian.

In the late 1820s the slavery question was beginning to agitate the area, and Witherspoon took a position far ahead of his time in advocating religious education, Sunday schools, and preaching for slaves, a stand that ultimately resulted in strained relations between the pastor and his congregation. On 23 Aug. 1833 he severed his seventeen-year connection with the Hillsborough Presbyterian Church and somewhat reluctantly moved to Camden, S.C., to begin a brief, uneasy pastorate in the handsome Bethesda Presbyterian Church, designed by Robert Mills, on DeKalb Street.

In 1836 he found it necessary to place a second mortgage of $1,000 on his Hillsborough plantation and apparently, soon after, to mortgage his slaves. Part of the plantation mortgage may have been used to enable him to travel to Pittsburgh, Pa., for the annual convocation of the Presbyterian church, which he had always faithfully attended, thus keeping his own church abreast of the national currents of Presbyterian thought. At that time he received the highest honor of his life, and the highest within the gift of his church, when he was elected moderator of the General Assembly of the Presbyterian Church in America as his grandfather the Signer had been. (He had earlier served as moderator of Orange Presbytery in 1822, 1827, and 1831 although only one term was usual.)

Several honorary degrees now came to him, but there is confusion as to early records. Battle's History of the University of North Carolina states (1:186) that The University of North Carolina conferred a D.D. on Witherspoon and that Princeton awarded him an LL.D. The D.D., however, is not included in the University of North Carolina's official listing of honorary degrees. An early biographer, W. A. Withers, stated that the College of New Jersey granted Witherspoon a D.D. in 1836 as had Lafayette College at Easton, Pa., and that an LL.D. had been granted to him, although the grantor institution was not named. Despite the contradictions involved, it seems certain that Witherspoon received both degrees. But he was not elected president of Miami College, Oxford, Ohio, as Battle's History states (1:836), nor was he elected to any post at Hampden-Sydney College, Farmville, Va., as is sometimes said, although he did fill the pulpit of a Presbyterian church in the vicinity of the college.

Colds and rheumatism had steadily troubled Witherspoon in Camden, and he made an ominous discovery the next spring at the General Assembly meeting in the wet, chill May of 1837 in Philadelphia. Some large, painful internal "boil" or "affection of the heart," as he described it in a letter of 23 May to his daughter Susan, made it "exceedingly painful" for him to move about or turn his body. On his return to Camden, he decided after thought and consultation to accept a call to the Presbyterian Church in Columbia, S.C., and began his pastorate there in the summer of 1837.

However, persistent heavy chest colds and rheumatism incapacitated both Witherspoons in Columbia for months at a time throughout two unusually severe winters, necessitating the constant and expensive employment of substitute pastors. Finally, on 29 Aug. 1839, Witherspoon formally resigned his charge and went back to his mortgaged Hillsborough farm, Tusculum, named at about that time for his grandfather's New Jersey farm, also about one and a half miles from its village (Princeton). He had returned to his native state "to die," as he told his brother, but in fact he lived another fourteen incredibly difficult years.

An early ambitious plan of the Witherspoons on their return to Tusculum had been to establish a silk farm in order to earn a livelihood and pay their debts. They strained their slender resources to buy eggs and worms, plant "closely" some 5 acres of mulberry trees, and build a hundred-foot-long, one-and-a-half story cocoonery. But the project did not succeed. Neither did the idea of building up a purebred stock farm. They even thought vaguely of driving vast flocks of 500 to 1,000 turkeys overland to autumn markets in Charleston, and Witherspoon decided to attempt opening a boarding school for boys once again—but no boys came.

A crushing blow was the public sale of Tusculum at the courthouse door on 29 Aug. 1845 to Dr. Edmund Strudwick, who had long and patiently held the mortgages. Witherspoon seems then to have departed on a curious Wanderjahre or trek through South Carolina and Alabama, preaching and teaching wherever he could, while his wife, still at Tusculum by special provision of Dr. Strudwick, tried to cope with the increasingly alarming nervous illness of their youngest daughter, Mary Nash, whom she managed to take to Philadelphia for prolonged treatment on three occasions.

In 1851 and 1852 Witherspoon, back at Tusculum, seems to have been well enough at intervals to conduct a baptismal service and even to preach now and then as supply pastor. His ailment, which he later called "dropsy," may have been cancer of the respiratory tract. He died at the Tusculum farmhouse, entirely penniless, on the thirty-seventh anniversary of the memorable organization service in the Hillsborough Presbyterian Church. His funeral services were held there, and he was interred a few yards to the northwest in the Nash-Strudwick plot of the Old Town Cemetery. The Presbyterian congregation and townspeople purchased the obelisk marking his grave.

A crayon portrait of Witherspoon as a young man was owned by the family of the late Reverend Dr. James Whitted Witherspoon, Lexington, N.C. It was reproduced in the Hillsborough Presbyterian church's anniversary publication, One Hundred and Fifty Years of Service, 1816–1966 (1966). Mrs. Susan D. Witherspoon died a few months after her husband, on 31 Mar. 1854 in Camden, S.C.

One Hundred Fifty Years of Service, 1816–1966, anniversary booklet of the Hillsborough Presbyterian Church (1966).

Many of the dates are wrong.

Many of the dates are wrong. If he died in 1794, how could he marry on July 1, 1813, for example? It is impossible, and I cannot use your site due to these discrepancies.

I'm sorry that you had difficulty with this article and I want to help clarify the issue of a date of death of 1794.  Here I note from the text that it was John Knox Witherspoon's grandfather who died in 1794.

Please visit NCpedia again and let us know if you have additional questions about the content or North Carolina history!