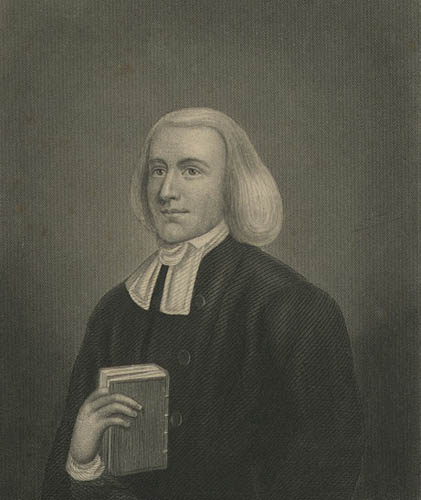 John Gano, Baptist clergyman, was born at Hopewell, N.J., the third of six children of Daniel and Saran Britton Gano. His great-grandfather, a French Protestant, came to New Rochelle, N.Y., soon after the Edict of Nantes was revoked in 1685. After an illness at age six that almost cost him his life, young Gano grew up on his family's farm with intentions of becoming a farmer. He showed an early interest in religion, however, often questioning his Presbyterian father and his Baptist mother and grandmother on religious matters. Although he first inclined to Presbyterianism, his reservations concerning infant baptism and his talks with Baptist ministers channeled him into the Baptist faith. Eager for knowledge, Gano learned what he could from ministers and sat in on classes at Princeton. Illness prevented him from enrolling formally at the college, but he continued private study and was ordained as a Baptist minister in May 1754.

Gano made three missionary journeys south, one in 1754 (actually before his ordination), another in 1756, and a third in 1758, when he became minister to a congregation in the "Jersey settlement" in Rowan County. Though a small man, Gano was athletic, healthy, and energetic and made many converts to the Baptist faith. He returned to New Jersey in 1760 because of Indian trouble in North Carolina. In 1762, he became minister of the newly organized First Baptist Church in New York City, where he remained for twenty-six years except for a brief absence when he served as chaplain in the American Revolution. According to family tradition, he became a close friend of George Washington and baptized the general near Valley Forge.

Always a friend to educational institutions, Gano helped found Rhode Island College (Brown University) and served as a regent of the University of the State of New York and as a trustee of King's College (Columbia). In 1788, he left New York and went to Kentucky to preach. Though he was injured in a fall from a horse in 1798 and shortly afterward suffered a stroke, he continued preaching until his death in Frankfort.

I am reserching a connection

Unfortunately, NCpedia does not have any additional information about the Gano family genealogy other than what is indicated in this entry.

You may wish to contact Genealogy Services at the Government & Heritage Library at the State Library of North Carolina for assistance in conducting family history research.

Here is the link to the Genealogy Services information page on the Government & Heritage Library's website http://statelibrary.ncdcr.gov/ghl/resources/genealogy.html

And here is the link to the email and telephone contact information http://statelibrary.ncdcr.gov/contact.html.