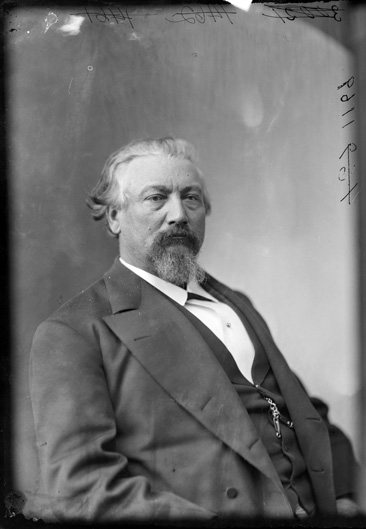 William Alexander Smith, farmer, railroad president, legislator, and congressman, was born in Warren County, the son of Bannister R. and Mary Smith. He attended an old field school until he was fourteen, when he became a day laborer on the Raleigh and Gaston Railroad. After working on the railroad for two years, he left the state for brief stays in Alabama, Texas, and Shreveport, La. Returning to North Carolina, he engaged in farming and married Polly Ann MacCauley. They had three children: Claude W., Roger A., and Sarah F., who married William H. Green of Richmond, Va.

In 1861 Smith was elected by Johnston County as a Union man to the secession convention. He opposed secession and voted against it. In 1864 he won a seat in the North Carolina House of Commons. When Governor William Woods Holden called the constitutional convention of 1865, Smith was again elected to serve his county. With the advent of congressional Reconstruction, he joined the Republican party. In 1868 Holden appointed him president of the North Carolina Railroad, headquartered in Alamance County.

As railroad president, Smith supported efforts to expand the company's service to the state by advocating the merger of several small railroad lines into one major company. The General Assembly opposed these efforts. When the state's Democrats met in convention in 1868, Smith refused to give reduced rail rates to them but did grant a 50 percent reduction for the Republicans that year. The North Carolina Railroad was again used for political purposes when the legislature of 1869 investigated charges of fraud in the state government. Governor Holden and Smith spirited a key witness, George W. Swepson, out of town on a special midnight train to prevent his appearance before the special inquiry committee. In 1871 the railroad was leased to the Richmond and Danville Railroad.

While living in Alamance County, Smith was elected to the state senate in 1870, but the election was contested. The General Assembly decided to allow Smith to be seated but called for an investigation. It later declared his seat vacant because Alamance County was considered in a state of insurrection due to Governor Holden's order for state troops to occupy the county after the murder of Wyatt Outlaw, a black man, by members of the Ku Klux Klan. In a new election, a Democrat was voted into office.

In March 1870 Smith purchased the Raleigh Standard from M. S. Littlefield. The paper was the state's major Republican organ, with editorial leadership in the hands of Joseph W. Holden, the governor's son and former proprietor of the Standard. The following September Smith sold the paper, reportedly saying, "I stopped printing the Standard because you can't print a paper for a party that can't read."

In 1872 he was elected as a Republican to represent the Fourth District in the U.S. House of Representatives, where he served on the Committee of Public Expenditures. Smith declined to run for reelection in 1874. He was appointed U.S. court receiver of the Western North Carolina Railroad Company, of which he later became president. The Republican party nominated him for lieutenant governor in 1876, but he was defeated along with Judge Thomas Settle, the gubernatorial candidate that year.

In 1876 Smith retired to his farm at Princeton in Johnston County. A lifelong Methodist, he died of stomach cancer at the home of his son-in-law, Captain William H. Green, in Richmond, Va. He was buried in Hollywood Cemetery, Richmond. His wife, who died in 1892, was interred in Selma, Johnston County.

William Alexander Smith was my great-great-grandfather on my mother's side of the family.

When I was a child in the 1950s, my grandfather, Dr. W.A. Smith (1888-1970), often took me to Smith's "home place" in Brogden, NC, near Smithfield. The home place was completely restored by the Johnston County Historical Society in 1992, and is listed on the National Register of Historic Places. The home is known as "the Smith-Atkinson house." So didn't William Alexander Smith marry a Polly Ann Atkinson (a widow of a Mr. Atkinson) rather than Polly Ann McCauley?

My ancestor was also known as "Blow-Your-Horn-Billy": as Major of the Home Guard, one of his duties was to "catch" Confederate Army deserters, but instead, while leading the Home Guard on its weekly "search," he would blow a bugle to warn hiding deserters that his Home Guard was in their vicinity.

I have two handwritten letters that Smith wrote to a friend at UNC-Chapel Hill in 1885, which I'd like to donate to the North Carolina Collection at Wilson Library.

Many thanks for posting this info. I've bookmarked the page for re-reading.

Thank you for visiting NCpedia and especially for sharing your history and this additional information.  And that is a very nice detail about “Blow Your Horn Billy.”  Thank you for sharing this!

I will investigate an amendment to Polly Smith’s maiden name.  If you have any additional sources that might help me with this, please feel free to let me know.  As you know, these more genealogical pieces are often difficult to verify, and having a lead to documentary sources will help me a lot.  If we cannot confirm a change, your comment will stay with the entry for other viewers to consider.

Donating your letters sounds like a very nice idea.  John Blythe is the Assistant Curator and Collection Development Librarian for the North Carolina Collection at Wilson.

Thank you again and please let me know if we can help with anything or you have additional questions.

I found a Col. W.A. Smith as witness to the marriage of my grandfather, Clement Richardson to Nancy Louvenia (Nannie) Atkinson (my Grandmother) and have reason to believe that this is the same man, particularly because he is mentioned as Step-Father to Clement in Tyler's Quarterly by my Aunt Eva Trower. If you can recall any information that may confirm this is the same man I would be very appreciative.
Sincerely, Charlotte M. Richardson

Thanks for visiting this entry and sharing your wonderful connection to North Carolina history!  Your post will stay with this entry for future readers.

I will look into the question of Polly Atkinson vs. Polly McCauley and a potential update to this entry.  If you have any additional information that would help, please feel free to post back here.