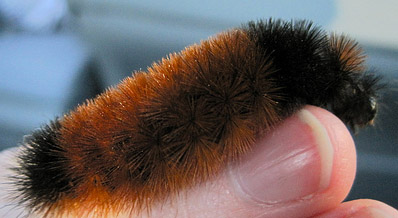 The fuzzy brown and black creature commonly called the woolly worm or woolly bear is the larval form of the tiger moth (Isia isabella). Woolly worms appear in early fall, when they feast on common plants, and emerge in spring from the pupa stage as moths.

North Carolina's Mountain peoples have long relied on the woolly worm's markings to predict the severity of the upcoming winter. The belief that the coloration of the woolly worm's coat matches the harsh and mild periods of the winter has several variations. For instance, the 13 bands on the caterpillar's body, colored brown and black, are said to correspond to the 13 weeks of winter, and the darker a band, the harsher that week will be. Another version holds more generally that a predomination of dark bands means a hard winter, and a majority of brown bands predicts a mild season.

"Reading the worms" is a popular fall pastime in the North Carolina Mountains. Banner Elk hosts an annual Woolly Worm Festival at which the main events are the woolly worm races. Caterpillars race on three-foot strings in heats until a champion is found, and the winning woolly worm is used for the upcoming winter's prediction. The Center for Woolly Worm Studies at Appalachian State University in Boone conducts annual studies on about 500 woolly bear caterpillars in a more scientific attempt to predict the winter weather.

addison stump: no,no,and no woolly worms dont do any thing

Found an all black woolly

Found an all black woolly bear on our porch (Central PA). Thought he was a goner but when I picked him up I just felt he wasn’t. He’s been out there for about a week, so today I brought him in and put him in a box and he has started moving around. What should I do with him? Shouldn’t he be going underground? What do they eat? Thanks!

It mostly eats leaves and

It mostly eats leaves and berries, and herbaceous. But DO NOT make a big bowl of water because their heads are always pointed to the ground.

Thank you for visiting NCpedia. Here is a site that explains their hibernation as well as additional facts: https://infinitespider.com/the-woolly-bear-caterpillar-in-winter/

You may also want to check with the Penn State College of Agricultural Sciences' Department of Entomology at https://ento.psu.edu/extension.

What about the black (only

What about the black (only black) woolly worms, do they bite?

Thanks for visiting NCpedia and taking a minute to ask your question.  It's a good one!

As far as we know from resources we've located, Woolley Worms do not bite nor are they poisonous.  According to one resource at the Cooperative Extension Service at Washington State University, some people can have reactions to the hairs.

And finally, here is also a link to an article about poisonous caterpillars from the NC Cooperative Extension Service at NC State University -- http://martin.ces.ncsu.edu/twigs/stinging-caterpillars/

I have a Woolly worm. Can I

I have a Woolly worm. Can I pick it up? Do they bite? Do they leave a mark?

The wooly worm does not bite

The wooly worm does not bite or sting, nor are they poisonous. They are typically harmless to handle, but some people with sensitive skin may find their hairs irritating, leaving a rash. Here's some additional information: http://puyallup.wsu.edu/plantclinic/resources/pdf/pls54woollybears.pdf