Part 3: Contributions to Victory on the Home Front 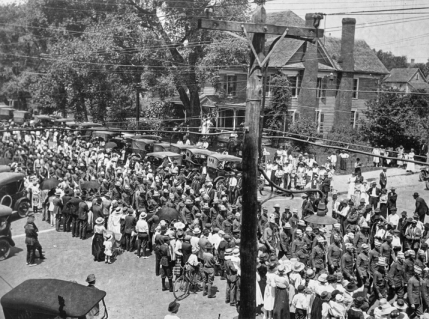 At home, North Carolinians contributed to the war effort in numerous ways and at times struggled with the economic and cultural impact of the war. Soldiers poured into training camps in the state, civilians volunteered for war work, factories new and old hummed with war production, and shortages of labor, food, and fuel touched everyone. The state's Council of Defense, under chairman D. H. Hill, encouraged morale and patriotism, stimulated food production and conservation, kept a register of vacant rooms for soldiers and war plant workers, provided legal aid for soldiers, reported the citizens and property of enemy nations, and helped control vice near army camps, among other responsibilities. The council received no state funds but was paid for by donations from wealthy North Carolinians.

The American Red Cross in North Carolina expanded in size and increased the number of local chapters. It ran canteens at railroad stations to feed traveling soldiers, aided needy families of soldiers, and donated clothing and other items for military hospitals and war refugees. The War Camp Community Service (WCCS), which operated in towns near military camps or hospitals, including Charlotte, Raleigh, Fayetteville, Southport, Asheville, Waynesville, and Hot Springs, organized entertainment troupes, lounges, reading and writing rooms, clubhouses, and excursions for soldiers. The Charlotte chapter set up a theater and converted the old Presbyterian Hospital into a hotel for soldiers' families. In Charlotte and other towns, separate facilities for black soldiers were established under the auspices of the WCCS. After the armistice in 1919, the WCCS opened more centers to welcome and assist returning veterans.

When a scarcity of farmworkers and the heavy strain on railroads from military and industrial requirements threatened to cause food shortages, a "Feed Yourself" campaign promoted by Bickett was so successful that the state produced four times as much food in 1918 as it had the year before. More than 56,000 new gardens were planted by North Carolinians, who were urged to grow, can, dry, or preserve as much of their own food as possible. Even garbage was saved to feed hogs or to be processed into soap, fertilizer, or explosives. To conserve food, "meatless" and "wheatless" days were instituted. Restaurants were encouraged to save food as much as possible. But only sugar was officially rationed.

There were shortages in other commodities as well. New construction, except for farm buildings, required a permit from the Council of Defense. Shoes, gasoline, and coal were scarce. In the fall of 1917 railroads in North Carolina had so little coal that they impressed shipments bound for industries and home use to keep their trains moving. To conserve coal, citizens were asked to cut as much firewood as possible, and in 1918 most nonessential businesses were closed from 18 January to 25 March. From 6 Nov. 1917 until the end of the war, a "Lightless Night Order" permitted electric signs to be lit only from 7:45 to 11:00 and never on Thursday and Sunday nights.

War industries brought jobs, but they also contributed to labor shortages and overcrowding in some cities. Several ships were built in Wilmington, Morehead City, and Elizabeth City; artillery shells were manufactured at the Raleigh Iron Works; a plant in Sanford produced munitions; and a plant in High Point made airplane propellers.

The war touched North Carolina directly when the Diamond Shoals lightship (U.S. Light Vessel No. 71) was sunk by cannon fire from the German U-boat U-140 on 6 Aug. 1918. Throughout the war coastal communities dealt with fallout from submarine activities in the Atlantic. The largest military camp in the state was Camp Greene, near Charlotte, which at one time housed 65,000 men. Camp Polk, a training center for tank crews, was assembled near Raleigh. While the camp was under construction, the men trained at the State Fairgrounds. Work on Camp Polk stopped when the war ended. Camp Bragg, an artillery training camp near Fayetteville, was established in September 1918. It remained open after the war and grew into the modern installation of Fort Bragg.

During the conflict, North Carolina housed a significant number of German prisoners of war (POWs). The internment of POWs fell under the jurisdiction of the War Department, which operated camps in Fort Douglas, Utah; Fort Oglethorpe, Ga.; and, later, Fort McPherson, Ga. A fourth internment camp, run by civilians under the Department of Labor, was nestled in the sleepy hamlet of Hot Springs, N.C., in the heart of the Blue Ridge Mountains. The POWs interred at Hot Springs were merchant marines arrested when their ships, mostly luxury liners and cargo vessels bottled up in U.S. ports, were seized in April 1917. Because these men were noncombatants and therefore not officially POWs, they fell under the custody of the Labor Department and the technical charge of noncompliance with immigration laws. The initial group of 1,800 merchant crewmen was later joined by an additional 500 seamen from ships captured in Panama and the Philippines. While in Hot Springs, these POWs constructed barracks and mess halls surrounded by barbed wire on the lawn of the Mountain Park Hotel.

this is cool it lets you know

Thanks for letting us know!  I'm glad it was helpful.