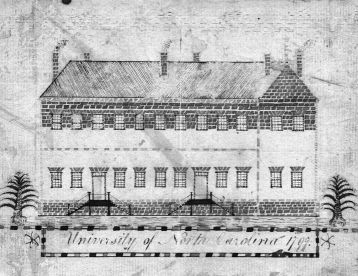 I too am a great grand son of

I too am a great grand son of Hinton James. My mother was born Mary Wall James and married Jim Sutherland. My brother Willian Fulton graduated from UNC, my son has a masters from the Physical Therapy School at UNC, several cousins have graduated from UNC, now my grand daughter , McKenna James Sutherland will enter as a freshman 2020!!
Proud to be a James, James L. Sutherland (Sunbeam)

It is interesting to note the

It is interesting to note the parallel lives of UNC's first students David Gillespie and Hinton James who were close personal friends and fierce competitors scholastically. They both wrote especially interesting compositions that won the recognition of the professors and awards from the University Board headed by Governor Martin.
James continued his education graduating in 1798 during the Tenure of James Smiley Gillespie as university President . Meanwhile , David unselfishly gave up his leadership role of the first class to lead Ellicott's survey across Florida to ensure success of the Pinckney Goday Treaty with Spain to allow our new nation shipping rights on the mighty Mississippi River.
Upon graduating James began his career as a survey engineer serving as an assistant to Fuller a Scottish civil Engineer who was selected by the State of NC to improve the navigation of the coastal inlets and the Cape Fear River especially for commerce up to Fayetteville.
Following David's dangerous , successful, four year survey across the Indian infested swamps of Florida he having received a letter of recommendation signed by Jefferson due to his keen survey triangulation skills was selected by Hassler to serve as his assistant to survey the harbors along the Atlantic Coast, especially around New York harbor, to improve the young nations maritime operations .
During the war of 1812 the Coastal Survey was placed under the war department leading to David Gillespie receiving the rank of major. The coastal survey's maritime responsibilities over the years greatly increased ,especially during World War 1,wherein the Coastal Survey became the geodetic Survey .
During their engineering survey careers both David Gillespie and Hinton James served a number of years in the N.C. state legislature . Gillespie during his legislative years ,like his father Congressman James Gillespie , was selected to serve on the Governor's Council.

Hinton James was my great

Hinton James was my great great great grandfather. His 1st wife, Sara Moorehead , died during child birth, and her son was buried with her. The 2nd wife was Mary Ann Watson, who also died during childbirth, het daughter was buried with her.The 3rd wife, Ann Maria Hand, survived Hinton James and is buried in Augusta, GA. And she later married John ? Baker.

My 5th great grandfather was

My 5th great grandfather was Hinton James. My fathers mother was a James. We recently found evidence in the NC Masonic Grand Lodge proceedings of1832 the name Hinton James from St Johns Lodge 1 in Wilmington. Dad always suspected he was a Mason. UNC was founded by Masons. In answer to your question I have an Uncle Hand, so the name lives on. Dad donated an original picture of Dr. James to the Wilson library at Chapel Hill. I would be interested in learning more about Dr. James

Ms James
It is interesting to note the parallel lives of our 3rd great grandfather's Honton James & David Gillespie.Even though they were especially close friends with David supporting & inviting Hinton to join the Phi fraternity they were fierce competitors for scholastic honors @UNC .
As you are probably aware Hinton and David's friendship was separated when David volunteered to be in charge of the Florida field survey across Fla to resolve the Florida boundary disputes with Spain which provided acess for our new nation to the mighty Miss River .while Hinton continued to scholastically star ironically graduating under David' s distance cousin James Smiley Gillespie

Following Hinton's graduation and David's successful completion of the Florida surve they chose careers that used their keen triangulation surveying abilities . Hinton assisted Fuller in survey the NC harbors with David using his recommendation from Jefferson to assist Hassler in Surveying the harbors of our eastern coastline especially in and around NY. During the war of 1812 the coastal survey was placed under the War Dept thus David was an 1812 war veteran. The Coastal survey continued to become an important National geodetic department of government providing key critical military maps. The coastal survey is now known as the Geodetic Survey

In the interim both David and Hinton served in the NC state legislation
Im pleased to read your blogs about our ggggrandfater's achievement .

We as Gillespie family

Excellent! Thank you very much for sharing the additional information!

David Gillespie was my 3rd

David Gillespie was my 3rd great grandfather, and I was thrilled and honored to attend the coffee at UNCW today, May16, 2014 where my brother, William A. Settlemeyer, Jr. presented the Division for University Advancement a copy of David Gillespie's diploma from UNC dated September 21, 1796 and signed by Governor Sam Ashe.

This is a legacy our family is very proud of.

Please ensure that David Gillespie's historical accomplishments are published in Powell's Dictionary of N.C. Biography. The other resources you mentioned, Battle & Gillespie papers were referenced in my recently released book, "Quest for Freedom", The Presbyterian Struggles for Pollitical and Religious Freedom is available on Amazon.
Upon discovering your comments today, April 23, 2014,and my constructive complaints about the absence of official recognition of David Gillespie my overall review and Gillespie family recommendations are:
*Justly provide commemorative recognition of David Gillespie on the UNC campus- a commemorative case for his diploma signed by Gov Ashe should as recommended by Dr. Schrader, former director of UNC Southern Historical library , be appropriately placed at UNC.
* Provide a roadside marker for David Gillespie
I apologize for my comments relative to Hinton James, David Gillespie's personal friend ,who as noted from Phi frat records always scholastically achieved in a similar ranking as David Gillespie.
As my friend Rodenbough who wrote the biography of Gov Alexandria Martin who should be recognized as the founding father of N.C., stated, " Bill, Our purpose is not to criticize the somewhat limited history , but to broaden and present exhilarating history that has been overlooked. This overlooked history obviously would embellish and provide increased interest to our founding fathers incredible achievements.
If you in some way could have UNC Appropriately commemorative acknowledge David Gillespie the leader of the 1795 first class the Gillespie family would be especially appreciative.
Thank you for your comments and please read"Quest for Freedom"