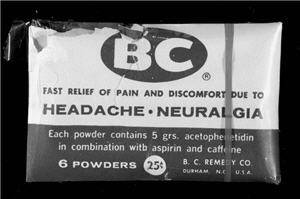 When was aspirin invented? The father of modern medicine, Hippocrates, working between 460 and 377 BC, left records of pain-relief treatments that included the use of powder made from the bark and leaves of the willow tree to help heal headaches, body pains, and fevers. In 1829 scientists discovered a pain-relieving compound called salicin in willow plants. Salicylic acid was tough on stomachs. In 1853 Charles Gerhardt neutralized the acid but did not pursue marketing his new find. Several years later, Feliz Hoffman, an employee of German company Bayer, found Gerhardt’s formula, marketed it, and sold it. Aspirin was patented March 6, 1889, and sold as a powder. Tablets came along in 1915.

Why headache powders? It was very common for druggists in the early 1900s to buy raw materials and make their own prescriptions. Pills were harder for the local druggist to make, so pain-relief powders developed as a regional heritage.

BC Headache Powder: Pharmacists Germain Bernard and Commodore Council created their headache powder in 1906 at the Five Points Drug Company in Durham.

Stanback Headache Powder: Thomas Stanback, of Salisbury, created his headache powder in 1911, as a young pharmacist in a Thomasville drugstore. He moved to Spencer to work at the Rowan Drug Store while its pharmacist vacationed. There he gave samples of his new headache power containing aspirin to railroaders, who carried it up and down the Southern line. Stanback persuaded his younger brother Fred to try selling the powders to area stores. Thomas prepared the product by night, and Fred sold it by day. Thomas used a flour sifter, then a sifter with a hand crank to speed production. The brothers began renting a building in Spencer in 1927 and sold their powders from Richmond, Virginia, to Columbus, Georgia. In 1932 a new Italian-made folding machine was purchased, and production moved to Salisbury. Full-scale national advertising began. 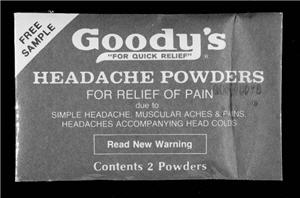 Goody’s Headache Powder: Winston-Salem pharmacist Martin “Goody” Goodman created his headache powder in 1932. A. Thad Lewallen Sr. bought the formula and trademark a few years later. His marketing strategy based on sampling introduced Goody’s Headache Powder to the Southeast and beyond. Samples were handed out to factory workers at shift changes. This promotional method created a dedicated following. Demand soon outstripped production. In 1941 a modern production facility and an increased sales force furthered boosted Goody’s.

Bromo-Seltzer: Isaac Edward Emerson, a native of Chapel Hill and 1879 graduate of the University of North Carolina at Chapel Hill, moved to Maryland in 1881. In 1888, working behind the prescription counter of a modest drugstore, he created a remedy for headaches and indigestion. His background in chemistry and pharmacy led to the granular effervescent salt he named Bromo-Seltzer and packaged in cobalt blue glass bottles.

At the time of this article’s publication, Suzanne Mewborn served as the program coordinator for the Tar Heel Junior Historian Association at the North Carolina Museum of History.

Resources in libraries about the history of medicine [via WorldCat]

Changing of the standback

Changing of the standback packs from a wax like paper package to a enclosed white bag like package is totally Unfavorable it’s hard to get all of the powder out of the bag or pouch the wax like open pack was easier to manage, the bag tear. When you try to pull apart sometimes. I know people that also take stand backs and they don’t like the way their packaged either. Please regard customer feeling.

This is an encyclopedia article about headache powders created in North Carolina. To leave a comment for the makers of Stanback Headache powder, that website is  https://www.prestigebrands.com/products/pain-relief/stanback-headache-po...

Years ago I bought a 50 count

Years ago I bought a 50 count box of Goody Powders and there was a free travel pack that held 8 powders.I lost mine.Could you please send me a new one?

Hello, I recently stumbled across a small 12 tablet tin of Stanback. The tin is in great shape and has all 12 tablets still inside, which are also in great shape. I picked up the tin in a bundle deal. Any idea what the value would be on this?

Thanks for visiting NCpedia and sharing your artifact.

Unfortunately, we don't have any information in NCpedia that would help with valuing antiques and other historical items. You may want to consult an antique dealer.

I found a pack of "3for 5 cent " Headache powder it doesn't state goody just headache powder . says it come from Salisbury nc? Know anything about it ?

Help with a ? found a very

Help with a ? found a very small bottle clear with a label on it Goody plus Winston Salem never seen one can not find anything about it. Was Goody ever put out this way? Is this a rare find?

Thanks for visiting NCpedia and taking time to ask your question.  That's an excellent question!  Unfortunately, at NCpedia we're not able to answer questions about the authenticity or value of historical items and artifacts.

You may want to enlist the help of a librarian to help you pinpoint sources that might answer your question.  Librarians at your local library are a great place to start. You can also contact our librarians here at the Government & Heritage Library. Here is a link to contact information for our reference services http://statelibrary.ncdcr.gov/contact.html.