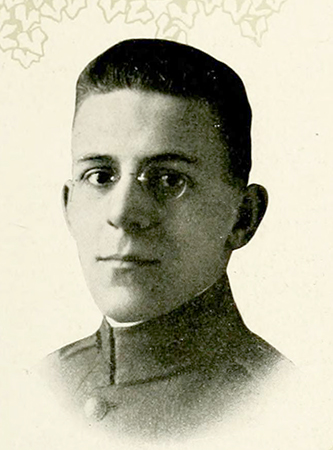 Theodore Edward Rondthaler, teacher, was born at Christ Church parsonage in Salem. The first of his forebears to come to America was Emanuel Rondthaler, who was raised by a Moravian pastor in Herrnhut, Saxony; he became a Moravian missionary and was sent to Sarepta, Russia, before moving to York, Pa., in 1808. One of his three sons, Edward (1819–55), was a Moravian pastor in Nazareth. This man's son, Edward (1842–1931), served as bishop of the Southern Congregation and president of Salem College in North Carolina. The bishop's son, Howard Edward (1871–1956), the father of Theodore Edward, was a Moravian pastor who served as president of Salem College and then as bishop of the Southern Province. Theodore's mother was Katherine Boring Rondthaler, a Philadelphia Quaker. Another ancestor was the Reverend John Heckewelder, a missionary and historian among the Indians, who assisted President George Washington in preventing an Indian war in the present state of Ohio.

Rondthaler attended Moravian Preparatory School in Bethlehem, Pa., and three schools in Winston-Salem—Salem Preparatory School, Tinsley Military Institute, and Winston-Salem High School. During the summers from 1912 to 1921 he visited his aunt at Pocono Lake Preserve, Pa., where he learned rowing, swimming, and canoeing and entertained with his guitar and clarinet. At the Quaker camp of a hundred cottages, he worked delivering supplies by boat and came to appreciate the high Quaker standards and ideals.

In 1915 he entered The University of North Carolina, where his education was interrupted when he and others in his class were sent to Officers' Training School at Plattsburg, N.Y. After about six months' training at Buffalo University, he was discharged as a second lieutenant. In Chapel Hill he and others were graduated with the class of 1919 without having to make up the courses missed. While at the university he ran cross-country and was editor-in-chief of the University of North Carolina Magazine, secretary of Phi Beta Kappa, and a member of the student council. He also was a member of Golden Fleece, the highest honorary organization on campus.

During the year following his graduation he was an instructor at the university and began to work on a master's degree. Rondthaler then went to New York to try to decide whether he really wanted to teach; he lived in the Bowery YMCA and worked at such jobs as unloading bananas and fish. Later he was employed for about six months with National Carbide in Jersey City, until offered a position as superintendent of a department. By this time he had decided that he really wanted to become a teacher and entered Princeton University, from which he received a master's degree in 1923 with a major in English and Latin; he met his expenses by tutoring pupils at the Hunn School. Afterwards he bicycled through Europe and attended classes at the University of Munich (1923) and the University of Paris (1924).

Returning to Winston-Salem for the Christmas of 1924, he began to teach Latin at Salem College. There he fell in love with his father's secretary, Alice Billing Keeney, of Connecticut, who became his wife in 1927, and gave up his plans to study for a doctorate. From 1928 to 1945 Rondthaler was a high school teacher and the principal at a school in Clemmons near Winston-Salem. In 1945 he became treasurer of Black Mountain College, a utopian educational endeavor, and taught a variety of unusual courses such as "Extraordinary Communities" and "Conventional Punctuation." As treasurer he successfully negotiated for accreditation under the GI Bill of Rights and used his initiative to obtain buildings and equipment from the federal government.

With their own children enrolled in Reed College, Portland, Oreg., the Rondthalers in 1948 began teaching at the school on Ocracoke Island, where they owned a home. He ceased to teach in 1962 but remained active in the community until his death.

Rondthaler, who had become a licensed land surveyor in 1956, entered this field after his retirement. He also was chairman of the Board of Mosquito Control but demoted himself to manager in order to become more involved in the actual work. For many years he taught the adult Bible class in the Methodist church and served as a lay preacher. Having been a scoutmaster in Forsyth County many years before, he also was a scoutmaster on Ocracoke Island. Music was his hobby, and he played the clarinet, oboe, bassoon, flute, Autoharp, and guitar as well as composed music. An outdoorsman, he enjoyed hiking, sailing, and swimming. On one occasion he swam across the Yadkin River at flood stage and on another he climbed the cables of Brooklyn Bridge.

The Rondthalers had two children: Howard Mayro, who was employed by the National Forest Service in Portland, Oreg., and Alice Katherine, who married Dr. George M. Woodwell, an ecologist at Woods Hole, Mass. Rondthaler died in Durham, where he and his wife had moved in October 1965 to live in the Methodist Retirement Home in anticipation of his auditing classes at the Institute of Government in Chapel Hill. He was buried in the community cemetery at Ocracoke.

Mr. Rondthaler was my Dad's

Mr. Rondthaler was my Dad's principal at Clemmons School. In the early '60's, we went to Okracoke on vacation and stopped by his house and visited with him. My Dad thought a lot of him.

This is nice article about my

This is nice article about my grandfather. Thank you.