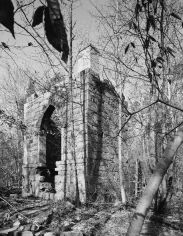 The Castle McCulloch Gold Mill is a restored gold refinery in Jamestown listed on the National Register of Historic Places. Built by Charles McCulloch, a Cornish engineer who brought the new steam engine technology to North Carolina from England, the structure was completed in 1823 and restored in the early 1980s. It is a granite castle, complete with drawbridge, moat, and 70-foot tower. Using locally quarried granite, McCulloch and stonemason Elizier Kersey created a Cornish Rock Engine House for the refining of gold ore, with a "Walking Beam" steam engine that powered Chilean mill ore crushers.

After years of ownership within the McCulloch family, the site passed through several hands and fell into disrepair before being bought and rebuilt by Richard Harris during the mid-1980s. It is maintained by the McCulloch Foundation. The site is popular for such occasions as weddings, receptions, and corporate events. In 1997 the Crystal Garden was built nearby, with Victorian-style beveled glass walls, a crystal chandelier, and a veranda with a view across a lake to the castle. The gold mill-which operated on the grounds of the castle for its first three decades-offers gem and gold panning, historical tours, and rock quarry visits.

I also played in the castle

I also played in the castle as a kid. Happy to see it has been restored.

My grandmother's house was

My grandmother's house was the last house on Bronze Road. We played in the ruins of this castle for my entire childhood in the 70's. The chimney which was still mostly intact always had bats in it. Whatever happened to the door underneath the stream near it. We tried everything to get that door open but never could.

I played in the castle also

I played in the castle also as a kid. Ty for the pics and info!

Thank you 4 the history on

Thank you 4 the history on such a unique piece of NC HISTORY...my home from birth, 51 Yrs and VERY PROUD!

Been to McCulloch castle in

Been to McCulloch castle in Scotland
Born in Nova Scotia

My home also, I’m 50yrs old and I played in this castle when I was a kid