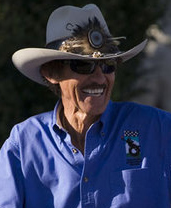 Stock car racing fans need no introduction to the Petty family. The patriarch of this racing dynasty was Randolph County native Lee Petty who won 54 NASCAR Grand Nationals during his career and was three times NASCAR Grand National Driving Champion. He died on April 5, 2000, at the age of 86.

Lee's son Richard Petty and his grandson Kyle Petty have taken the family vocation to new heights. Richard Petty's career included 200 NASCAR Winston Cup wins and he was nine times named the Most Popular Driver in the Winston Cup series. Among his victories are 7 wins at the Daytona 500, a race his father won in 1959. Daytona also has been a good track for Kyle Petty. The very first stock car race Kyle entered was at Daytona and he came in first. Kyle has won over $8,000,000 so far and is still going strong. In 1997 he became an owner as well as a driver. Adam Petty, Kyle's son, had also become active on the racing scene, competing on the NASCAR and ASA circuits, before he was killed in a practice run on May 12, 2000 at the age of 19.

sorry dude, i think he is

sorry dude, i think he is dead.

Richard Petty is my cousin,

Richard Petty is my cousin, he sent the family a plaque tht Bob and Dora Williams my grandma and grandpa showed all of us and, I'd like to try and get ahold of him somehow any ideas ??? I'd like him to meet my little girls, I have 4 of them . I take after my relatives the Petty's in old pictures at grandma's, I think a Jack Petty is who relates us, dk forsure, would love to meet you man, your distant family Jeremy Williams