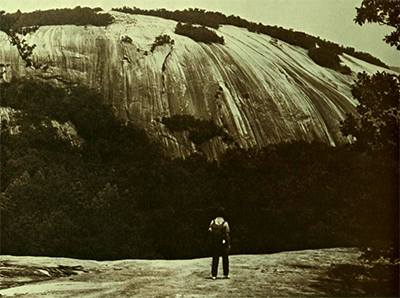 Long before becoming a state park, Stone Mountain was settled by families of English, German, Irish, French and Scots-Irish descent who built the log homes, farms, mills, churches and schools needed for self-sufficient communities. A restored 19th century mountain community, the Hutchinson Homestead, is located within the park.

Stone Mountain State Park was established in 1969 when the efforts of local citizens led to the acquisition of 1,463 acres of land. Part of the land was donated, and its value was used as the state’s matching fund for grants from the Land and Water Conservation Fund and the Appalachian Regional Commission supporting purchase of the initial land for the park. Since then, Stone Mountain State Park has grown to become one of the largest units in the state parks system. Its combination of highly significant biologic, geologic, scenic, recreational, and archaeologic resources makes it one of the premier units of the system.

Stone Mountain is located on the eastern edge of the Blue Ridge escarpment in the Mountain Province of North Carolina. It is on the northern border of Wilkes County, approximately 17 miles northeast of North Wilkesboro, and extends into the southeastern portion of Alleghany County. The park is accessible via U.S 21, S.R. 1002, and the John P. Frank Parkway, between Sparta and Elkin.

The area is characterized by extremely rugged wooded terrain, with several large granite outcrop areas, the most spectacular being Stone Mountain. Stone Mountain is a dome-shaped granite mass rising 700 feet above its base

and is composed of biotite granite. Numerous creeks flow through the park and form several waterfalls. Stone Mountain Falls, located on Big Sandy Creek at the southeast end of the mountain, is the highest waterfall, with a vertical drop over 200 feet. The lowest elevations are along the East Prong Roaring River. A large expanse of steep, wooded terrain extends north and west from the river to the Blue Ridge escarpment.

Among the significant geologic values is Stone Mountain, an exfoliation granitic dome rising 700 feet above the valley floor. It is the largest plutonic monadnock in the state. The light gray, medium-grained biotite granite forming the mountain developed from magma several miles deep in the earth. As erosion removed the overlying granitic rock, the resulting release in pressure caused the rock mass to move upward and intrude into older surrounding rocks sometime during the mid-Paleozoic era, 200 million years ago. Wolf Rock and Cedar Rock within the park are similar in structure. The proximity of these plutonic features to the Blue Ridge escarpment is of unusual geologic interest. As a result. Stone Mountain was designated as a National Natural Landmark in 1974.

The topography and microrelief, combined with substrates ranging from bare rock to fairly well-developed soil, support significant and diverse biologic values within the park. Natural communities include Acidic Cove Forest, Pine-Oak Heath, Chestnut Oak Forest, Dry-Mesic Oak-Hickory Forest, Low Elevation Rocky Summit, and Low Elevation Granitic Dome. Wolf-Cedar Rock Natural Area features extensive development of outcrop communities that are excellent illustrations of the successional sequence in the various stages of granite colonization,from lichen to moss to herb to shrub to forest communities. Thirteen rare plant and animal species, including two endangered species, have been reported in or near the park. The park also protects over 200 species of vascular plants.

In addition to the significant scenic values of Stone Mountain and Wolf and Cedar Rocks, the park includes four waterfalls: Stone Mountain Falls, 200 feet in height; Middle Falls, a seriesof low slides; Lower Falls, approximately 25 feet in height; and Widow’s Creek Falls. The northwestern vistas, a panoramic look at the Blue Ridge escarpment, are the most scenic in the park. The most extensive vistas can be best viewed from Wolf Rock. Seventeen miles of cascading trout streams within the park add to the beauty of its exceptional mountain scenery.

Forests dominated by chestnut oak cover the slopes of the park's rock-faces while scarlet and black oaks, red maple, hickory, white pine and dogwood populate the woodlands. In the understory are blueberry, rhododendron and mountain laurel. Small, slow-growing pines and cedar fringe the rock while mats of lichens, mosses and small ferns grow on areas of open, exposed granite.

Find frogs and salamanders savoring the moist habitats bordering streams at Stone Mountain while a variety of trout swim underwater. Beavers also enjoy the waters of the park and have created small ponds near the East Prong of Roaring River. Many species of birds inhabit the area, including scarlet tanager, whippoorwill, ruffed grouse, turkey and pileated woodpecker. Other animals found in the park include box turtles, gray and red foxes, bobcats, raccoons and white-tailed deer.​

My fifth great grandfather Randolph Holbrook Jr born about 1717 Goochland County Virginia died 1793 married Mary Holbrook and his brother John Holbrook born 1727 died 1805 received land grants for land on Holbrook Mountain aka Greenstreak Mountain aka Stone Mountain NC on September 4, 1779. John got 175 acres and Randolph got 250 acres. They were the first to own land on Holbrook Mountain and the mountain got its name from those two brothers Holbrook Maintain. I think that it is imperative that we all understand what happen in the past and how people through their hard work allows us to have what we have today. Otherwise, people just think that what we have available came without hardworking and sacrifice of the people that allow us to enjoy it today. Randolph Holbrook Jr and John Holbrook wee the sons of Randolph Holbrook born 1696 Surrey County, England and first appeared in Virginia USA about 1716 married Janet (Jannett) Patterson Conyers (Connyers) in Goochland County, Virginia. The brothers left Virginia to NC because of of religiouspersecution of the Baptist in Virginia. The Baptist church at stone was built by my ancestors. Ralph Holbrook born 1755/1774 died about 1808 married Jane Winfrey Holbrook born 1765/1770 died March 20, 1854 over forty years after her husband died was the son of Randolph Holbrook Jr . Around 1800 Ralph owned 340 acres in Wilkes County North Carolina. Ralph inheritedpart of Randolph Holbrook estate in 1793. I am encouraging you to update your web site to know the true history of Stone Mountain and the people that were its care takers. That way people will know that we have what we have today because of the hard work forsight of those people. Thank you.

I have been trying to find

I have been trying to find information about my ancestors from Stone Mountain nc. Charlie (pappy) Wood lived in cabin across from where the store is now. He was my great grandfather. My grandmother Carrie Wood married Ichabod Nelson . My father Charlie Nelson and uncle James Garfield Nelson was raised on stone mtn . I have memories of going there a lot to visit and hike when little. Would like more information. It would be greatly appreciated. Thanks