The General Assembly incorporated the first North Carolina Historical Society in 1833 at the behest of Governor David L. Swain. No records exist indicating a meeting of the society, but the act, authorizing the incorporators "to transcribe or cause to be transcribed" public records, presaged future efforts of Swain and others to gather, copy, and print selections from the early records of state government. Swain later moved from the governor's office to the presidency of the University of North Carolina, where he devoted more time to what became his passion: collecting sources of North Carolina history and literature. In 1841 William H. Haywood Jr. wrote that Swain had been named chairman of a committee of "our Lity. & His: Socy" and proposed a meeting which, if held, was not reported in the press.

Finally, however, in January 1844 Swain announced the organization of the Historical Society of the University of North Carolina with himself as president and the entire faculty as members of the executive committee. Among the society's purposes were to obtain copies of Proprietary and colonial records relating to North Carolina in British repositories and to collect, arrange, and preserve at the university "one or more copies of every book, pamphlet and newspaper published in this State . . . and, especially, all the records, documents and papers to be found within the State, that may tend to elucidate the history of the American Revolution." Within a year the society received an impressive number of gifts, including an orderly book kept during the Regulator Movement, a "large collection" of the papers of John Steele and Thomas Burke, and rare printed materials. Although its name remained alive until the Civil War, the society was in fact a one-man operation providing legitimacy for Swain's personal solicitation of materials.

The Historical Society of the University of North Carolina died with Swain in 1868, but two years later a new Historical Society of North Carolina emerged with one central objective: "to procure from Mrs. Eleanor H. Swain the books and manuscripts claimed by the society." During his presidency, Swain had kept the manuscripts in his university office along with personal belongings, and a lengthy controversy followed when his widow claimed them all as private property. This latest organization also disappeared when the university temporarily closed in 1871, but in 1875 the General Assembly chartered another Historical Society of North Carolina with authority to "acquire and hold" the materials collected by Swain. At first this organization was centered in Raleigh, but within a few years it too became associated with the university, with Kemp P. Battle as president. Meanwhile, Mrs. Swain held onto the valuable manuscript collection until her death in 1883. Although some of the papers were sold during settlement of her estate, most were preserved through the diligence of executor Walter Clark and later formed the nucleus of the Southern Historical Collection in Chapel Hill. Clark borrowed others while editing The State Records of North Carolina and never returned them to Chapel Hill, giving the papers instead to the North Carolina Historical Commission. These papers remain in the State Archives.

With the only functioning historical society then located at the university, the publication of The Colonial Records of North Carolina stirred sentiment for a more active statewide organization. In 1893 the General Assembly memorialized the name of the recently deceased editor of the ten-volume Colonial Records series by chartering the William L. Saunders Historical Society of North Carolina. Like several previous efforts, this one perished before it was formally organized. Local organizations soon followed, however, spurred on by these statewide efforts as well as by regional pride and growing interest in local history. An early example, the Historical and Scientific Society of Wilmington, was organized in October 1876 for the purpose of developing the intellectual and physical resources of the Cape Fear region and collecting and publishing the history, traditions, genealogy, and biography of the area's early settlers. The society met monthly, usually in a fraternal hall of one of the large churches in Wilmington. Club members gave most of the lectures, but occasionally speakers were brought in from out of town. By 1883 the society had also begun to collect artifacts, photographs, paintings, music, books, relics, and botanical specimens. The Historical and Scientific Society of Wilmington continued to meet throughout the 1880s but is not mentioned in Wilmington newspapers or city directories after 1890. Except for some published papers, it is not known what happened to the archives and museum artifacts collected by the society. 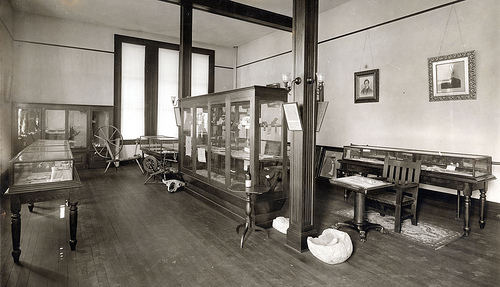 The Trinity College Historical Society was established in 1892 under the leadership of Stephen B. Weeks, a professor of history and other subjects at Trinity College (later Duke University) in Durham. The society was intended to encourage the study of history and the collection of historical materials. Weeks soon left Trinity, but his successor, John Spencer Bassett, proved equally energetic and resourceful in building up the library, encouraging research in primary sources, and generally promoting historical study through the society. In 1897 Bassett and the society launched a long-running series of Historical Papers, the first such scholarly enterprise in the state. Bassett's student and successor as professor of history, William K. Boyd, also proved to be an enterprising scholar who took a leading role in the society, especially after Duke University was organized around Trinity late in 1924. The Trinity College Historical Society continued well after midcentury to have a vigorous life as a meeting place and forum for graduate students, faculty, and others interested in history. By the last two decades of the twentieth century, however, the society had become moribund.

The Wachovia Historical Society, chartered in March 1895, grew out of the Young Men's Missionary Society, which in 1841 had begun collecting cultural curiosities and examples of natural history from around the world that had been obtained through a network of Moravian missionaries. In 1845 the group opened a small museum to display its artifacts. The museum's location shifted several times but eventually settled in the Boys School on Salem Square in what is now Winston-Salem. Fifty years later the group decided to organize a more formal historical society focusing on Moravian, North Carolina, and local history. Eventually the historical society expanded into historic preservation, acquiring the Adam Spach Rock House in Davidson County, the site of the Hans Wagner Cabin at Bethabara, and Salem Tavern. In 1953 the Wachovia Historical Society and Old Salem, Inc., entered into an "operating agreement," allowing Old Salem to maintain the museum, lease and restore the tavern, and use the society's collections in its exhibit buildings.

As the state continued to emerge from the economic and social turbulence of the late nineteenth century, many North Carolinians pushed ever harder for ways to research and collect information regarding state history. An important manifestation of this historical awakening occurred in 1900 with the founding of the North Carolina Literary and Historical Association by many prominent men and women. The association involved leaders of all three branches of government and within five years could share credit for many major accomplishments, including the establishment of North Carolina Day in the public schools, promotion of public and school libraries, commemoration of the Roanoke colonies, passage of a history textbook act, and, most important, the establishment of the North Carolina Historical Commission to serve as the state's official archival and historical agency. The Historical Commission's first major publication, Literary and Historical Activities in North Carolina, 1900-1905 (1907), contained an impressive record of activity for a state that so recently had seemed to ignore its past.

During the next century, historical societies formed in most of North Carolina's counties and some of its municipalities, their success depending largely upon the vigor of their volunteer officers. The Western North Carolina Historical Association (WNCHA), incorporated in 1952, was founded by a group of authors, publishers, educators, and collectors of historical information to preserve and encourage the study of western North Carolina history. (The Cherokee Historical Association, which oversees the Oconaluftee Indian Village and the Museum of the Cherokee Indian, emerged at the same time as the WNCHA.) Dean William E. Bird of Western Carolina University (then Western North Carolina Teachers' College) in Cullowhee served as the association's first president. The Smith-McDowell House, the oldest surviving house in Asheville, serves as the WNCHA's headquarters and museum. The association rescued the property from demolition and, after complete renovation, opened it to the public in 1981 as a museum and regional cultural center. The firm of Frederick Law Olmsted, which also landscaped the Biltmore House grounds and Central Park in New York City, designed a landscape plan for the property in 1899. Since its founding, the WNCHA has presented an annual award for achievement in the field of history related to western North Carolina. In addition, the association's Thomas Wolfe Literary Award, a silver cup contributed to the Historical Association by the family of Morris Lipinsky Sr., one of Wolfe's boyhood friends, annually recognizes an outstanding published work about western North Carolina.

For decades, the North Carolina Literary and Historical Association, concerned with all aspects of the state's heritage, was the most influential private organization in the state. Gradually, however, members with more specific interests formed subgroups, including the Folklore Society in 1913, the Art Society in 1926, the Roanoke Island Historical Association in 1932, the Archaeological Society in 1933, the Society for the Preservation of Antiquities in 1939, the Society of County and Local Historians in 1949, the Museums Council in 1964, and the Genealogical Society in 1974. These groups initially maintained close relations with "Lit and Hist," holding their annual meetings during one concentrated Culture Week in Raleigh, but by the 1980s all met separately.

I am researching my Ownbey

I am researching my Ownbey ancestors and need a recommendation as to who to contact. My grandfather was born in Henderson, NC. I live in Oklahoma and have to do things online and have already subscribed to ancestry.com.
thank you, Carol Dilworth.

I have sent your comment to our reference librarians who will be able to assist you.