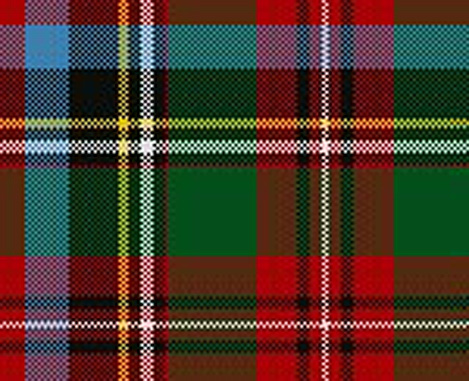 The General Assembly of 1991 officially designated the plaid pattern known as the Carolina Tartan to be the official State Tartan (Session Laws, 1991, c. 85).

Selection as the State Tartan

The bill to select the Carolina Tartan as the official state tartan was sponsored by Rep. Bill Hurley of Fayetteville. He promoted his bill in the House committee with a brief fashion show of kilts made with the tartan. The bill was unanimously approved in the state government committee and approved by the House of Representatives 86-3. Legislators said this selection served as ceremonial recognition of North Carolina’s Scottish heritage. The Carolina Tartan was adopted by the St. Andrew’s Society of North Carolina as early as 1981. North Carolina was the third state to select an official state tartan, and, as of 2017, has been followed by 16 others.

About the Carolina Tartan

A tartan is a repeating pattern of checkers in different colored bands, stripes, or lines woven into woolen cloth. It can be found in many cultures, but is usually associated with the clans of Scotland.

A unique blend of red, azure, black, yellow, green and white, the Carolina Tartan was first registered with the Scottish Tartans Society in 1981, and was also designated the Official Tartan for South Carolina in 2002. The design is a variation of a tartan associated with two monarchs--King Charles II, who gave his name to the Carolinas, and the honorary bodyguard of King George II, who designated both North and South Carolina as Royal Colonies in 1729. Large numbers of Scots helped to colonize the Carolinas in the 17th and 18th centuries, and the State is now home to a number of festivals, games, and organizations that celebrate Carolina's Scottish heritage, including the Grandfather Mountain Highland Games and the North Carolina Scottish Heritage Society.

The Scottish Tartans Museum in Franklin, North Carolina, educates the public on traditional tartans and highland dress. Their exhibits display Scottish history, culture, and the evolution of the kilt.

Ran across some interesting

Ran across some interesting details on this website: https://www.tartanregister.gov.uk/tartanDetails?ref=573.
Designed by Peter MacDonald (Assistant Curator, Scottish Tartans Society) in 1980 for the St. Andrews Societies of North & South Carolina, as a Carolina tartan. Worn by the Cross Creek Pipe Band of Fayetteville in the 1980s and by the North Carolina State University Pipes & Drums in a 'weathered' sett, both woven by Dalgliesh. Based on a fragment of a coat of the Royal Company of Archers c1730 and believed to be the sett used as wedding ribbons on the coat of King Charles II for his nuptials in 1661. He (Carolus) confirmed the Charters granted by his father Charles I to the states of North & South Carolina.

Is there somewhere we can

Is there somewhere we can purchase this beautiful tartan?

You can find information about some Scottish Merchants here: http://www.carolinatartan.com/links.htm

Just tell us what information

Just tell us what information you want, and we'll help you find it. Meanwhile, here's two links to more info about the State Tartan:

I had no idea we had an

I had no idea we had an official tartan!

Wow. I didn't wven know what

Wow. I didn't wven know what tarten is ! Muich less we had an offical state tarten!!