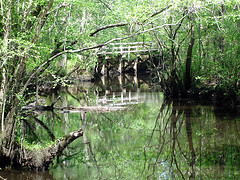 From February 15 to 21, 1776, the days leading up to the Battle of Moores Creek Bridge, Whig forces under commander Colonel James Moore camped on Rockfish Creek. At that site they were eight miles south of Cross Creek (present-day Fayetteville) where Royal Governor Josiah Martin’s representative, Alexander McLean, and British officers General Donald MacDonald and Captain Donald McLeod were assembling a Loyalist militia. Their goal was to march the Loyalists to Wilmington and there defeat the Patriots, returning North Carolina to British rule. By fortifying the encampment at Rockfish Creek with over 1,000 men and five artillery pieces, Moore blocked the Loyalists’s most direct route to the coast.


To get around Moore’s blockade, Loyalists were forced to cross the Cape Fear River at Campbelton and use Negro Head Point Road, a route that crossed Moore’s Creek. When Col. Moore learned of the Loyalists’s chosen route, he sent messages to Colonel Richard Caswell to block their route at Corbett’s Ferry over the Black River, to Colonel Alexander Martin and Colonel James Thackston to take possession of Cross Creek to prevent their retreat, and to Colonel Alexander Lillington to fortify Moores Creek bridge. Moore led his men to Elizabeth Town in hopes of meeting the Loyalists on their way to Corbett’s Ferry. Aware of the location of Moore’s and Caswell’s forces, the Loyalists constructed a bridge four miles above the ferry and continued on towards Moores Creek. There they were met by artillery and rifles from Caswell’s and Lillington’s forces. By the time Col. Moore and his men arrived at Moores Creek bridge, the battle was over. The Patriots had defeated the Loyalists, killing or wounding at least fifty men. Moore and his men pursued the remaining Loyalists and captured 850 soldiers. With the victory at Moores Creek Bridge, North Carolina was saved from being overrun by the British.

Are there maps of the area

Are there maps of the area surrounding the Black river and Moore's creek that show who the landowners were during the 1776 time period?

Thank you for visiting NCpedia and for taking time to share your question.

NCpedia has another article on the battle that mentions Elizabeth Moore, a widow who owned the land that the creek flowed past: https://www.ncpedia.org/moores-creek-bridge-battle

I have two suggestions for additional information.

First, you may want to contact the National Park Service for the Moores Creek National Battlefield site: https://www.nps.gov/mocr/index.htm. They will be the experts on the area and may have both records and maps to consult.

Second, original property records and any plat maps that exist may likely be at the state archives of North Carolina. The county at the time would have been New Hanover. If you want to trace the property ownership, the State Archives and State Library would be the best place to start. Here are links to their websites:

I am looking for, Why did

I am looking for, Why did the Battle of Moore's Creek happen?

You might be interested in this additional NCpedia article about the battle -- https://www.ncpedia.org/moores-creek-bridge-battle. It includes more information about the events leading up to the battle.

I hope this helps! Please post back if you have more questions.

Hello - I am looking for

Hello - I am looking for information on Gabriel Davey, 1750-1807 from Caswell County. From what I have found he own sever thousand acres near & around the Tar River.

Any help would be greatly appreciated!

I am looking for information on Neil McGraw. Some distant relatives indicated that he may have been a Loyalist and fought for the British during the Battle of Moore's Bridge. They also indicated that he was injured during the battle. After the war, he relocated to New Brunswick, Canada.

I am forwarding your question to Reference Services at the NC Government & Heritage Library.  A reference librarian will contact you shortly to help you with this question.

I have some Foy family papers

I have some Foy family papers that tell the story of our ancestor, James Foy, who owned Foy's Ordinary in Jacksonville, NC (Washington entered in his diary that he stayed there during his tour of the Commonwealths) and Sugar Hill plantation and the supposed role he played in shooting one of the leading officers of the Loyalists during the battle thus resulting in a Patriot victory. Is there anyway I might research to confirm or substantiate this family history? My family and I have visited Moore's Creek but did not know at the time of my ancestor's participation. Any help would be appreciated. We plan on making another trip soon. V E Streeter

I'm trying to find out if the

I'm trying to find out if the Lt Colonel Archibald Lytle who fought at the Moore's Creek Bridge battle is my relative. Entries in ancestry.com had him listed as my relative but then had his death as 1729 which makes it impossible for him to have fought in the Revolutionary War! Any help would be greatly appreciated & thank you!