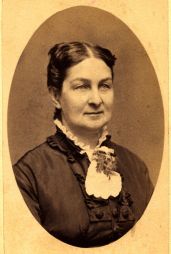 Emily C. Prudden, educator and missionary, established fifteen primary and secondary schools in western North Carolina in the late nineteenth and early twentieth centuries. At age fifty, she left her native Connecticut, where she had raised her late sister's orphaned children, to serve as housemother at Brainerd Institute in Chester, S.C. Her accomplishments over the next thirty years were all the more remarkable in light of the fact that from age seventeen she was deaf.

She began her work in North Carolina in 1884, when she acquired fifty acres at All Healing Springs in Gaston County. Her school there was known in time as Jones Seminary and later as Linwood College. In 1888 she established Lincoln Academy nearby for black females. From this beginning she went on to found schools at Blowing Rock, Connelly Springs, Saluda, Elk Park (one white, one black), Mill Springs, Cedar Valley, Lawndale, Brevard, and Tryon and one near Lenoir. The school at Lenoir was her greatest success. Oberlin Home and School, transferred to the care of the Woman's Home Missionary Society in 1903, was the direct forerunner of Pfeiffer College at Misenheimer.

The strategy she followed at Oberlin was the one she used elsewhere: to establish a school and after a few years transfer control to an organization better able financially than herself to keep it going. In this she worked closely with the American Missionary Association. Consequently, Prudden usually did not stay in one community more than two or three years. Upon retirement in 1909 she returned to Blowing Rock, site of her Skyland Institute founded in 1887. Prudden's remains were returned to Orange, Conn., for burial. In a eulogy, Congregationalist minister George Dickerman estimated that 10,000 students had passed through her schools over the years.

The school mentioned as "one

The school mentioned as "one near Lenoir" was actually located in Hudson North Carolina just south of Lenoir.