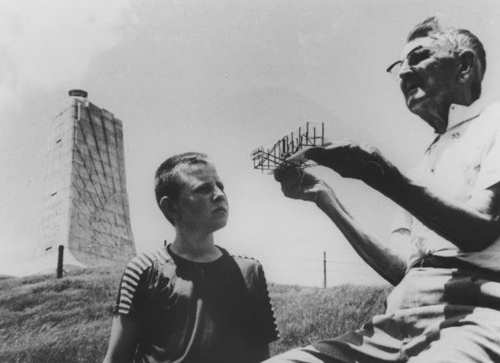 Alpheus Walton Drinkwater, U.S. Coast Guard communications officer, was born near Oregon Inlet on the Outer Banks of North Carolina, the son of Edward and Josephine Etheridge Drinkwater. He was one of fourteen children—thirteen boys and a girl. His father was for many years officer-in-charge of Virginia Beach's U.S. Lifesaving Station; his mother came from a prominent Roanoke Island family. Drinkwater was a self-made man who became widely known before his death. Although often credited with transmitting the first message of the Wright Brothers' flights of 17 Dec. 1903, he actually—as he often told his intimate friends—only relayed the message. On that date he was assigned to send daily reports on a salvage operation of an early submarine, Moccasin, which had broken a tow line while enroute from New England to Norfolk, Va. and drifted south to fetch up on the beach in the village of Corolla. He explained that it was necessary to break in the line for telegraph communications between Kitty Hawk, near the site of the first flight, in order to send his reports of the salvage operations at Corolla. Thus all messages being transmitted from south of Corolla had to be relayed from there into Norfolk.

As a youth Drinkwater lived in Virginia Beach, where one of his first jobs was selling tickets at the railroad station for trains leaving the beach early in the morning. By 1908 he was living in Manteo. In addition to covering the U.S. Lifesaving and Weather Station lines between Hatteras and Norfolk, he also, as a telegrapher, sent messages to U.S. government facilities and to Western Union. During the 1908 experimental flights of the Wright Brothers, he became closely associated with many newsmen who had come to witness the flights that were preliminary to selling the planes to the federal government for military purposes. He transmitted press copy to many New York and other big city newspapers. 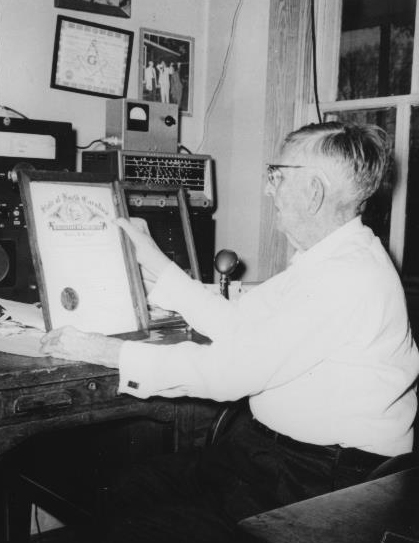 Drinkwater was one of the coastal areas' best loved personalities. His home was a meeting place for many friends ranging from local townspeople and Lost Colony cast members to nationally known dignitaries. As a stringer for the Associated Press, he was always quick to tip off friends on newspapers when a story would break on the coast—be it a shipwreck, hurricane, death of a prominent person, or an item on some unusual incident.

When he retired as a communications officer with the U.S. Coast Guard in 1946, Drinkwater joined the Civil Air Patrol as a communications warrant officer. He took pride in being the oldest CAP member in the United States at the time. He helped organize the Kill Devil Hills Memorial Society (now the First Flight Society); he was also a charter member of the Manteo Rotary Club and a Scottish Rite Mason of the Coinjock Lodge. Governor Terry Sanford named Drinkwater "Wreck Commissioner" following his retirement from other duties. A great sportsman and reputed to be an excellent shot, he made it a point to hunt on each opening day of the wildfowl season. He had no problem getting his limit of ducks and geese.

Drinkwater was a newsman to the end. Apparently sensing he was about to die, he asked his daughter to call Manteo newsman Aycock Brown about 2:30 A.M. on a Monday. Dorothy, a retired army nurse who lived with him, quoted her father as saying, "Tell Aycock to call the AP with my story." He died three hours later.

On 23 Aug. 1905 Drinkwater married Rosa Lee Gray of Long Point near Coinjock. They had two children, Dorothy Lee and Marguerite Lyle. He was a Democrat and a Baptist.

Images of Drinkwater in the State Archives of NC: https://www.flickr.com/search/?w=24231108@N08&q=drinkwater