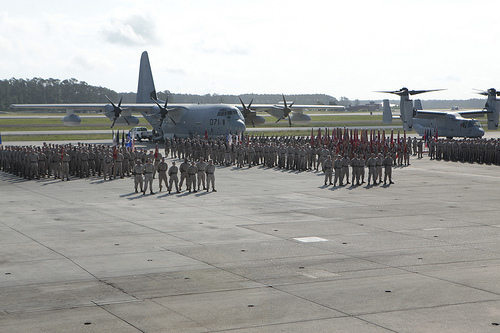 1942 the field was named Cunningham Field to honor Lt. Col. Alfred A. Cunningham, the first marine aviator. It was later renamed Marine Corps Air Station, Cherry Point, in reference to a local post office situated among cherry trees. During World War II Cherry Point trained units and individual marines for service in the Pacific theater. The air station also served as a base for antisubmarine operations, with an Army Air Corps and Navy unit each sinking a German U-boat just off the North Carolina coast in 1943. The Ninth Marine Aircraft Wing was based at Cherry Point during the war but replaced with the Second Marine Aircraft Wing in 1946.

Throughout the Korean War (1950-53), the base provided a steady stream of trained aviators and air crewmen, as well as maintenance and support personnel as replacements to forward deployed aviation units. During the Vietnam War (1957-75), Cherry Point deployed three A-6 Intruder squadrons to the Far East and again provided a constant source of replacements for aircrews and enlisted aviation personnel. In Operation Desert Storm (1991), Cherry Point deployed three AV-8B Harrier squadrons, two A-6E Intruder squadrons, one KC-130 Hercules squadron, one EA-6B Prowler squadron, and headquarters detachments from Marine Air Group 14, Marine Air Group 32, and the Second Marine Aircraft Wing. Following the terrorist attacks of 11 Sept. 2001 in New York City, Cherry Point marines and sailors participated in strike missions and operations in Afghanistan and Iraq. 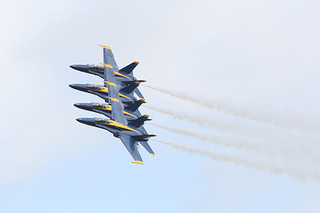 Hi, just trying to find the

Does anyone here know anyone

Does anyone here know anyone who may have been stationed at Cherry Point around 1957-1960? My grandfather and I are searching for fellow Marines or anyone who may have served on or around the flightlines or worked as an aircraft mechanic. Or if there are any old articles or pictures of the flight line out there. It would be a great honor and help to my grandfather to connect with you!

My dad was stationed at

My dad was stationed at Cherry Point from 1956 to 1957. I was born in June of 57 and my dad was discharged in Aug 57. He was a mechanic. His first name was John, last name Vlha. We lost dad in 2008 to a stroke. I am not sure what photos or articles mom may have kept. I am not sure if this info. may help.

When was the Blue Angels

When was the Blue Angels airshow in 1971 at MCAS Cherry Point?

Question: Is there any printed data (i, e., old base newspapers, etc.) that might be available or direct men to another source for assistance like, chronological history for the Group's on file.

I thank you for any assistance in this matter.

Thank you so much for visiting NCpedia and especially for taking time to share your history and question.

I’m going to give you a number of possibilities for inquiry:

First, I see that the National Archives at Atlanta (part of the U.S. National Archives) may have the Camp Lejeune paper in their collection as well as other information about the base that may help answer your questions.  Here is a finding aid for their collection from 2012 that includes this reference: https://www.archives.gov/files/atlanta/finding-aids/federal-periodicals.pdf.  And here is a link to their website for contact information: https://www.archives.gov/atlanta

The library at Camp Lejeune may also be of help, and it’s possible they may have copies of papers available as well as other historical information.  Here is their website: http://library.usmc-mccs.org/cgi-bin/get_data.pl?library=Camp%20Lejeune.

I am hopeful at least one of these will help you.  The National Archives are the collector of U.S. military records so I am hoping they will be able to help first.

I hope this helps!  Please let me know if you have any additional questions and best of luck with your search.

What happened to the MAG 20 H

Thanks for visiting and asking your question.

My best thought is to contact the public affairs office at Cherry Point. They may be able to tell you or, if the base has a library or historical unit, they may be able to direct you there for more information.  Here is website: http://www.cherrypoint.marines.mil/Public-Affairs/Windsock-Archive/