Part v: The Trail of Tears and the Creation of the Eastern Band of Cherokees 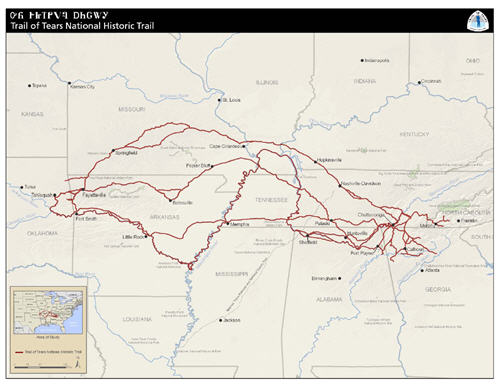 In 1830 Congress passed the Indian Removal Act, setting the stage for the forced removal of the Cherokee and the infamous Trail of Tears. In 1835, a small, unauthorized group of about 100 Cherokee leaders (known as the Treaty Party) signed the Treaty of New Echota (Georgia), giving away all remaining Cherokee territory in the Southeast in exchange for land in northeastern Oklahoma. Principal Cherokee Chief John Ross collected more than 15,000 signatures, representing almost the entire Cherokee Nation, on a petition requesting the U.S. Senate to withhold ratification of this illicit treaty. The Senate, however, approved the treaty by a margin of one vote in 1836. The treaty gave the Cherokee people two years to vacate their mountain homeland and go west to Oklahoma.

By May 1838, few Cherokees were prepared to move, so President Martin Van Buren, who had succeeded Jackson in 1837, dispatched federal soldiers commanded by Gen. Winfield Scott to round up Cherokees in North Carolina, Tennessee, Georgia, and Alabama and place them in various internment camps and stockades. The horrible conditions facing his people at these poorly planned facilities led Ross to appeal to the president for a delay in the removal until fall, when water and game would be more plentiful. Van Buren agreed, and between October 1838 and March 1839, the Cherokee moved west. The journey was mismanaged; there was a shortage of supplies; and the troops rushed the Indians onward, refusing to allow them to minister to their sick or bury their dead. Of the approximately 15,000 who began the trek, an estimated 4,000 perished. 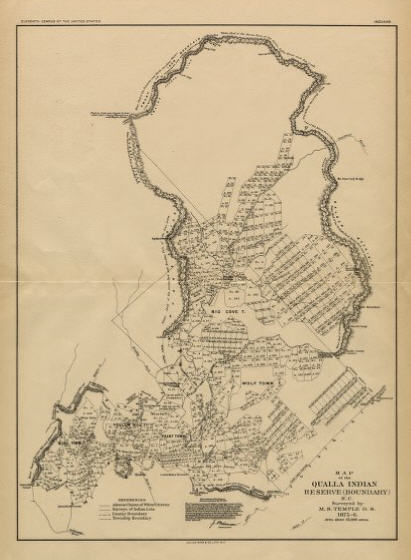 Approximately 300 to 400 Cherokees remained in North Carolina, hiding in the mountains. One of their leaders, Tsali, was captured and executed for killing two federal soldiers pursuing him and his family, but some of his followers and other Cherokees (who had possibly aided in Tsali's capture) were allowed to remain. Between removal of the Cherokee Nation in 1838 and the end of the Civil War, many Cherokees gave their money to William Holland Thomas, their agent and later their only white chief, to purchase land for them. Thomas acquired many of the tracts that would make up the modern-day Qualla Boundary, the official name of the Cherokee Indian Reservation in North Carolina. These Cherokees—together with the hundreds who had hidden in the mountains, who already legally owned land through the Treaty of 1817, or who had escaped the Trail of Tears and returned--formed the nucleus of what would become the Eastern Band of Cherokee Indians.

My 3rd greadgrandmother took the name Jane Rains (1806-1868) by census estimate record. when at 14 she married american soldier James Cook.As she took a white persons name I cannot find where and when she was buried. Last known lived in Butler Co. Ky.Many of her children lived in Ohio Co. Ky. She told many tales of being a Cherokee. Did the Cherokee have a cemetery? I am at a lost.

Thank you for visiting NCpedia. I am forwarding your request to our reference team.

I know theat cheif davis's son knows who rue bottom sheets is. Cheif Davis should ask him and tell him I've been trying to dedicate something to him if he can reach me. just tell Him I already dedicated 29 14 of them special dedications of their own

Chief Davis
I have been trying to help my Mother in love find information on her Great Grandfather who is Ruebottom Sheets who is supposed to be a Cherokee Chief and was on the Trail of Tears do you have any recommendations for me? Thank you in advance for your help.

EARLY DAYS
My father, Frank Geboe, was Eel River Miami Indian, disbanded at Peru, Ind. He was Indian and French and spoke both languages. He died in 1871 and was 35 years old then and he is buried at Ottawa Cemetery in this county.

My mother, Pa-tes-noquah Geboe, was a full blood Ottawa. They lived near Ottawa, Franklin Co., Kansas, where they were married and my sister and myself were born. I was born November 24, 1861, and my sister, Emma, was born in 1865.

sorry mods I've been trying to get this mshg thru for ever but I know a friend of mine knows who rue bottom sheets is. I just would like to know if this msg goes thru so they can see it. will wout ask cheif davis to speak with me or how I can get in touch with cheif davis

I was told by a

I was told by a representative of the Cherokee Nation in Oklahoma that absolutely no one escaped from the Trail of Tears.

That was incorrect information. Here are two other sources where you can read about the land-owing Cherokees who remained legally, and others who illegally escaped and hid in the mountains:
https://en.m.wikipedia.org/wiki/Qualla_Boundary

Dear Chief Davis,
I have been trying to find my Grandmother's roots. She came from the N.Carolina eastern shore area. I saw a picture of a group of Cherokee men, her father among, taken at a church that burned down along with the census of that time. I am trying to find out how they were able to escape the Trail of Tears and how their communities were established, what they did to survive and some possible sites where that could have been. I want to find my family.
Thank you for taking your time to read this inquiry. I hope you can help, Coni