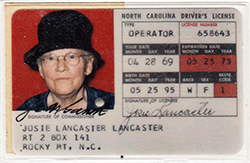 Driver's licenses became mandatory in North Carolina with the passage of the Uniform Driver's License Act, introduced in the General Assembly in January 1935 by Senator Carroll W. Weathers after a thousand deaths had occurred on state roads. The act was ratified on 28 Feb. 1935. Applicants were required to be at least 16 years old and to pay a fee of $1.00. Initially, no test or examination was required; a license was issued on the word of the applicant that he or she was an experienced and careful driver. The program was administered by the Department of Revenue through its newly created Division of Highway Safety. It was not until 1 Jan. 1948 that examinations for a license were required, but those already holding a license and having a safe record were licensed without an examination. Youth in modern North Carolina learn to drive while holding graded licenses that allow them greater driving freedom as they gain experience.

"An Act to Provide for the Licensing of Motor Vehicle Operators and Chauffeurs Upon the Public Highways and to Make Uniform the Law Relating Thereto, the Enforcement Thereof, and to Provide for its Operation." Public laws and resolutions passed by the General Assembly at its session of 1935. Charlotte: Observer Printing House, 1935. p.34-46. 1935. http://digital.ncdcr.gov/u?/p249901coll22,240307 (November 1, 2012).

It says on this site that the

It says on this site that the Department of Revenue through its Division of Highway Safety administered the program of issuing driver's licenses in the late 1930's and 40's. I'm interested in knowing how a 20 year old female applicant would go about getting one in 1941. Were there offices in courthouses that issued licenses or was it by writing to an office in Raleigh?

Thank you for your comment and for asking this intriguing question! I am forwarding your inquiry over to our library's Reference Team so that they can provide you further assistance. A staff member from our library will be reaching out to you via e-mail soon!

Hi, do you happen to know the

Hi, do you happen to know the cost of a North Carolina driver's license in 1999 ? Thanks, MW

Thanks for your question, I

Thanks for your question, I have sent it to the reference department of our library. You should hopefully hear back soon. Will take a little work to get the answer.

I just ran across a Chauffeur

I just ran across a Chauffeur's license (badge), North Carolina 38-39 expired June 30 1939, number 10456. Is there any way to find out who it belonged to? I think either David F Edwards (my grandfather) or Charles Pruett (my father). Any info would be appreciated.

Hi, I'm a DMV employee who

Hi, I'm a DMV employee who came across this comment.

Good luck with the rest of your info!

I believe this would be the place to look for such records: https://www.ncdot.gov/dmv/offices-services/records-reports/Pages/driving...

I hope this helps. Please feel free to respond to this post with any further questions or comments.

Do we have a record of who

Do we have a record of who the first person was to receive a license...city/county etc.?