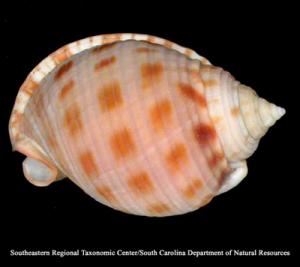 Scotch bonnet is the official state shell of North Carolina. The shell's inhabitant (Phalium granulatum) is a member of the helmet family, marine snails whose shells are characterized by short spires, large body whorls, and thickened outer lips. The scotch bonnet is found from North Carolina to Brazil and is distinguished by its pattern of small orange squares, which give it a plaid appearance (hence its name). The shell usually reaches 3 to 3½ inches in length when fully grown.

In the mid-1960s, state representative Moncie Daniels of coastal Dare County introduced the legislation naming the scotch bonnet as the official state shell and promised a keepsake shell to any of the 170 legislators who supported him. When he was able to find only two scotch bonnets, his colleagues grew hesitant to select such a rare shell. State senator Jimmy Johnson of Iredell County stated that inlanders "don't want to spend their time . . . horsing around for something that's extinct." Johnson suggested naming the chicken eggshell the official shell of Iredell County. Governor Dan K. Moore avoided the question and recommended the decision be left to those who knew more about shells. The bill passed in the Senate on 21 May 1965 and consequently became law after weeks of campaigning by Daniels and the bill's sponsor in the Senate, Ashley Futrell of Beaufort, who had acquired a box full of scotch bonnets and handed them out to his fellow senators.

Its not boring this is good

Its not boring this is good reading stuff.

i agree its good reading

i agree its good reading stuff

there is nothing to help on

The song does help

The song does help