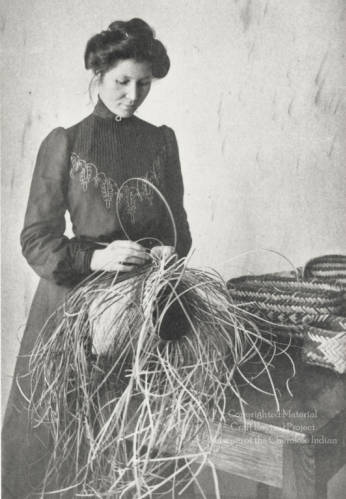 Basket making has likely been a part of North Carolina's history as long as human beings have inhabited the region. Although the fragility of basket materials means that few related artifacts still exist, the Native Americans of North Carolina's Paleo-Indian period (13,000 B.C. to 8000 B.C.) probably used baskets that they constructed from native materials for transporting items and gathering food. Archaeological evidence confirms that Indians used baskets widely in the early archaic period (8000 B.C. to 6000 B.C.). Basket making presumably spread as settlements stabilized and agricultural practices developed. Observations from the De Soto and Pardo expeditions in the sixteenth century note the existence of baskets among Southern Appalachian Indians. Early eighteenth-century accounts by European explorers and traders describe a developed Indian basket-making tradition.

Basket-making traditions from the eighteenth century to the modern era in North Carolina possess Native American, European, and African origins. The history of the craft reflects social, economic, and environmental changes faced by its practitioners. The variety of cultures in the state influenced each other. Older forms of basket making were adapted to newer materials even as older basket makers passed on their knowledge and traditions to younger generations. Baskets were an essential part of most households into the early twentieth century, used for gathering, storing, transporting, and measuring. Basket makers typically made their baskets after the planting or harvesting seasons and used such indigenous materials to color them as bloodroot (orange), yellow root (yellow), black walnut (brown), and butternut (black).

Once crucial to the agricultural and fishing economies of North Carolina, basket making diminished in importance during the twentieth century as inexpensive and readily available galvanized buckets, plastic containers, and paper bags became popular for gathering, transporting, and storing household items. Although no longer crucial to the typical North Carolina household, the basket-making tradition continues. Baskets are part of a vibrant material folk culture and arts 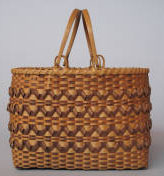 Traditional North Carolina baskets include several types made from native materials. White oak split baskets were made from pliable and sturdy young white oak trees, which had straight bark that yielded easily. Basket makers cut trees into sections and divided the sections into narrow strips called splits. The basket maker weaved the splits around a rib frame constructed of larger oak strips. White oak split baskets dominated basket making in North Carolina due to the tree's abundance, strength, and durability. Baskets made by Thurman Strickland, winner of a North Carolina Folk Heritage Award in 1991, typify the state's split oak tradition.

Rivercane baskets, made from the once-plentiful plant that thrived along the banks of North Carolina's rivers and streams, were primarily made by the Cherokee Indians. They harvested rivercane after it reached eight feet in height,

peeling off the outer layer and soaking the cane to make it pliable. The Cherokee wove in single- and double-weave patterns. Emma Taylor and Eva Wolfe, 1989 North Carolina Folk Heritage Award recipients, continue to work in the Cherokee rivercane basket-making tradition. Honeysuckle baskets did not become popular until the twentieth century. Not a strong material, honeysuckle is best suited for decorative baskets. Coiled baskets made from rye straw, broomcorn, and pine needles were popular among German immigrants and others. Many basket makers preferred North Carolina's plentiful longleaf pine needles as coiled basket material. The basket maker bundled the needles and coiled them in a tight spiral, binding the rows together with raffia or nylon string. Bark baskets were also common, often made of two pieces of hickory, poplar, or birch bark connected securely with hickory or birch lacing.

Jan Arnow, By Southern Hands: A Celebration of Craft Traditions in the South (1987).

Thank you for reaching out to us! Good question--a great resource to contact is the North Carolina Museum of History. They should be able to direct you or the Arts Council. Here is the website for the Museum staff directory: https://www.ncmuseumofhistory.org/museum-staff-directory I suggest contacting Michael Ausbon.

I am looking for a modern

I am looking for a modern coiled straw basket maker to be able to add to our collection - American Museum of Straw Art. Especially if you know a bee skep maker.