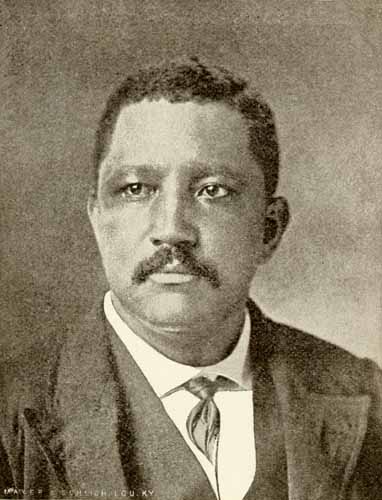 James Benson Dudley, educator and college president, was born in Wilmington to John Bishop and Annie Hatch Dudley, slaves of Edward B. Dudley (1789–1855), governor of North Carolina from 31 Dec. 1836 to 1 Jan. 1841. Young Dudley's early education consisted of instruction in the carpentry trade given by his father and attendance at the Wilmington Normal School sponsored by the Freedman's Bureau. At that institution, he was instructed in Latin grammar by Ella Roper before traveling to Philadelphia to take classes at Fannie L. Coppin's Institute for Colored Youth, an experimental school organized to test the Negro's capability to master the higher branches of learning. He also attended Shaw University in Raleigh where he majored in elementary education. Later in his career, he was awarded a master of arts degree from Livingstone College in Salisbury and a doctorate of letters from Wilberforce University in Ohio.

After working briefly as a mechanic's apprentice, in 1880 at the age of twenty-one he became a first-grade teacher in Sampson County. The following year he accepted a position as principal of the Peabody Graded Normal School in Wilmington, a post he held for fifteen years until 1896.

On 23 Feb. 1882 Dudley married Susan Wright Sampson, a Wilmington teacher and, later, the author of the college song for the Agricultural and Mechanical College at Greensboro. They had two daughters; one died young and the other became the wife of Dr. S. B. Jones, British health officer at St. Kitts in the West Indies.

While in Wilmington, Dudley edited the Wilmington Chronicle, an African American weekly newspaper, and was active in politics, serving as register of deeds for New Hanover County in 1891 and as delegate to the 1896 Republican National Convention in St. Louis. He was secretary of the board of trustees for the Agricultural and Mechanical College at Greensboro from 29 May 1895 to 27 May 1896 before succeeding John O. Crosby as president of that institution on 28 May 1896; he retained the post for twenty-nine years.

Because of his talent in winning both black and white support, Dudley was able to raise the college at Greensboro from the point of bankruptcy to a position of prestige in the state. He was particularly successful in resolving conflicts between the faculty and administration, in making the school industries self-sustaining, and in convincing not only the white legislature to appropriate funds for education for African Americans, but also a reluctant African American populace to support the previously unpopular agricultural and mechanical curriculum. During his administration the number of buildings on campus was increased from 2 to 13, the student body from 58 to 476, and the faculty from 8 to 46. He also played an important role in defining the character of the school. Believing that black students could be most effectively taught by black instructors, he began the gradual transition from a predominantly white to a predominantly black faculty. Further, because he shared with Booker T. Washington an intense faith in agriculture and public service as the principal areas for African American acceptance and progress, he sought the development of a thorough agricultural program at the Greensboro school, stressing the agricultural over the mechanical or industrial aspects of the curriculum. This devotion to agricultural training led Dudley in 1901 to discontinue the female department at the college, on the assumption that young women were not well suited to agricultural pursuits and that their presence only hampered such programs at the school. 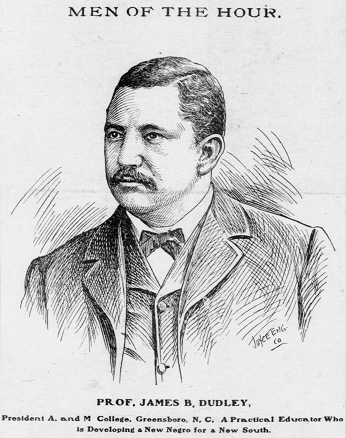 His faith in the importance of agriculture in the life of African Americans also led Dudley to establish farmers' institutes in conjunction with the Greensboro college. In 1912, with J. H. Bluford, an industrial arts instructor on the faculty, he cofounded the State Farmer's Union and Cooperative Society to encourage thrift, economy, and enterprise within the black race. This organization was especially concerned with helping African Americans deal with problems arising from the credit and mortgage system of the state, and in assisting African American farmers in buying and selling products at reasonable prices. Dudley also canvassed the state in 1917 to obtain matching funds for the Smith-Hughes appropriation so that a vocational agriculture department could be created to train agriculture teachers for the state's public rural schools.

Dudley was a member of the National Teachers Association (later the National Education Association) and one of the organizers of the North Carolina Negro Teachers Association, of which he was president for six years. He was chairman of the Negro section of the Greensboro Interracial Committee and the only member of that city's Committee of Extension. Although always concerned about the necessity of fundamental justice for African Americans, Dudley counseled his race to be patient and nonresistant. During the 1898 Wilmington riot he rushed home from Greensboro, reportedly to calm the African American population and act as mediator between black and white. On his arrival, he was met by the mayor of that city and received police protection for the duration of his visit.

Dudley also urged North Carolina's African Americans to remain loyal to the American cause during World War I and offered the Agricultural and Mechanical College campus to the federal government as a military training camp. A deeply religious man, he was a member of the Bethel African Methodist Episcopal Church, Greensboro, where he taught a Sunday school class and served as trustee. He was also a member of the Odd Fellows, the Pythians, and the Masons, serving for twenty years as foreign correspondent of the Grand Lodge of Masons.

In 1908 Governor Robert B. Glenn appointed Dudley as a delegate to the National Negro Fair Association in Mobile, Ala., and in 1920 Governor Cameron Morrison appointed him state commissioner for the National Memorial Association; in the latter capacity he was responsible for erecting a memorial in Washington, D.C., commemorating the Negro soldiers and sailors who had fought in the national wars.

Dudley died at his home in Greensboro at the age of sixty-six and was buried at Forest Cemetery, Wilmington. 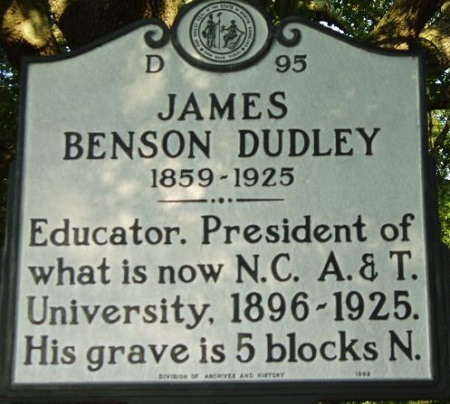 Link, William A., ed. 1996. The rebuilding of old commonwealths : and other documents of social reform in the progressive era South. Boston: Bedford Books of St. Martin's Press.

Did he have any problems

Did he have any problems

Thank you for taking the time to post a question to the article about James Dudley that appears in NCpedia.

Naturally, in reading through the article, many challenges he faced, and accomplishments he had, are discussed.

Additional information may be found about him on the NC Markers site at http://www.ncmarkers.com/Markers.aspx?sp=Markers&k=Markers&sv=D-95.

If you had additional questions, feel free to contact Reference Services at the State Library of North Carolina’s Government & Heritage Library. Their email address and other contact information may be found at http://statelibrary.ncdcr.gov/contact.html. If you have something specific you are looking for more information about on him, they may be able to help you track down the information.