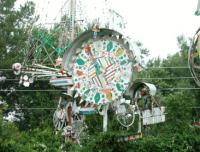 The General Assembly of 2013 adopted the Whirligigs of Vollis Simpson as the official Folk Art of North Carolina (H.B. 830).

An internationally recognized artist who never set out to become an artist, Vollis Simpson entered the art world at an age when most people enter retirement. He worked for years creating and building machines that could lift heavy items. He also earned a living repairing farm machinery. At about age sixty-five, Simpson turned his mechanical abilities to the creation of large-scale wind-driven kinetic metal sculptures. The sculptures—Simpson calls them windmills, others call them whirligigs—are without equal and have delighted and astonished people worldwide.

Vollis Simpson was born in Lucama in 1919. While serving in the United States Army Air Corps during World War II he was stationed on Saipan, in the Marianas Islands, where there was no fuel or electricity. Improvising, he built a wind-powered washing machine. “The thing went up and down in the water. It must have worked pretty good, ‘cause somebody swiped it, but I built a bigger one with an oscillating motion and secured it.” Returning home, he continued to use his powers of ingenuity as he established a repair shop and house moving business.

In the mid-1980s an injury forced Simpson to close his business. He adapted his Lucama machine repair shop and began to use his heavy equipment to make whirligigs. He says that many of his pieces were first envisioned in his dreams and then later become a reality in his shop. Made out of old wheels, scrap metal, odds and ends, paint and reflectors, these wind machines are created for the sheer pleasure of seeing them work. The whirligigs, which Simpson placed on one corner of his brother’s farm, enchanted many, and the farm became something of a roadside attraction.

Simpson’s soaring sculptures (thirty to fifty-feet tall) have become iconic examples of “outsider” or visionary art. (The terms indicate an artist who is self-taught.) His windmills are unparalleled in size or scope. Simpson is also the only sculptor of such works who generates both the ideas and the full-scale creations. In fact, he performs the metalwork and machine work using cranes and hoists that are also of his own construction.

Simpson’s whirligigs have been called “roadside gifts to the eye and spirit,” beguiling people from Albuquerque to Atlanta. One of his works is the signature piece on display outside of the American Visionary Art Museum in Baltimore. Several Simpson wind machines delighted tourists at the 1996 Olympic Games in Atlanta. The North Carolina Museum of Art boasts a large whirligig in its Art Park.

The City of Wilson had, for several years, hosted a Whirligig Festival to celebrate Simpson’s renowned artwork. Wilson is developing a dedicated downtown two-acre public park to open in November, 2013, featuring thirty-two of Simpson’s restored whirligigs. The Vollis Simpson Whirligig Park Project has received more than $500,000 from 11 of America’s top foundations, the National Endowment for the Arts and the North Carolina Arts Council.

Wayne Martin, director of the N.C. Arts Council, saidof Simpson and his work, “He was driven to make these from someplace deep within. He just wanted to create, and he used found recycled stuff, road signs and pipes and whatever else. He turned it into an enchanted environment, which took amazing creativity – and he did it alone. The scale is incredible, that one man did it all. He was a really talented guy, a practical person with a deep creative streak.”

"Whereas, at age 65, Vollis Simpson, a self taught folk artist, began making giant windmills known as "whirligigs" at his home in Wilson, North Carolina; and

Whereas, Mr. Simpson's whirligigs have been exhibited at the North Carolina Museum of Art in Raleigh, the High Museum of Art in Atlanta, Georgia, and the Visionary Art Museum in Baltimore, Maryland, and at other locations, including New York, California, Canada, and England; and

Whereas, Mr. Simpson and details of his artwork have been featured in many national magazines and in several books; and

Whereas, the City of Wilson is developing the Vollis Simpson Whirligig Park to display a large collection of these whirligigs in historic downtown, which will be a one of a kind destination for visitors...

SECTION 1.  Chapter 145 of the General Statutes is amended by adding the following new sections to read:

The whirligigs created by Vollis Simpson are adopted as the official folk art of the State of North Carolina."

Hi! The reason why is listed

Hi! The reason why is listed in the excerpt of the bill itself. It was in honor of Vollis Simpson.

What's some fun facts about

What's some fun facts about the symbol

Thanks for asking this question!

Here are a few that I can think of -- maybe you can find more!