Cowboys called him the Iron Man back in his day,
'Cause he'd rode in 'em all — Calgary to the San Francisco Bay...

On March 14, 1998, at the Tuff Hedeman Championship Challenge in Fort Worth, Texas, the 1995 Professional Rodeo Cowboy Association (PRCA) Bull Riding Champion was cut down in his prime, paralyzed from the chest down. The bull, Knock ‘em Out John, had done his job. As he had done so many times before, Davis had to “cowboy up” again and begin the long and difficult trail home to North Carolina. 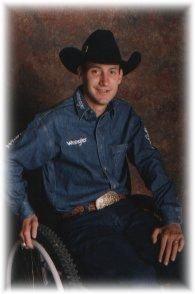 “I wanna be a bull rider,” said the young Davis many years before. Nothing unusual about the statement, perhaps, except maybe that this youngster was not from out West. His family’s ranch was solidly in the East, in Archdale, North Carolina. Not only did Davis become a bull rider, but a world champion. One who so dominated the sport, in fact, that Jerome Davis put the Tar Heel state on the rodeo and bull riding map.  While not the first Eastern rodeo cowboy, his efforts brought national attention to North Carolina's contribution to rodeo and bull riding. In his easy-going way, Davis made big-time bull riding look effortless.

Jerome Carson Davis was born in Colorado Springs, Colorado, on August 10, 1972, while his father was serving in the military. Six months later, the family returned home to Archdale, where the future cowboy champion would grow up working the family ranch.

He came out of the chute on his first bull when he was eleven, didn’t stay on long, but remained bound and determined to “be a bull rider.” On his fourth ride out, Davis got the whistle (he remained on the bull for the required 8 seconds). From that moment on, bull riding was his passion and his life. He took all the bumps, breaks, and bruises that went along with it, winning his first event as a freshman in high school.

In 1988, Davis rode in the National High School Finals in Pueblo, Colorado. He was named the North Carolina State High School Bull Riding Champion in 1990, drawing five bulls in the championship buck off and riding them all.

Two short years later as a freshman at Odessa Junior College, the North Carolina cowboy won the National Intercollegiate Rodeo Association’s Bull Riding Championship. This was exactly the catalyst he needed to take himself to the next level. That year, he joined the Professional Rodeo Cowboys Association (PRCA), a dream only a few cowboys experience.

As one of the original 20 cowboy founders of the now prosperous Professional Bull Riders (PBR), Jerome Davis lived by its "simple rule: Place a wiry 150 pound cowboy [Davis was 5'11", 160 pounds, at the time] on the back of a hulking, snorting, temperamental 2,000 pound bull and see if he can ride the beast for an eternal eight seconds..." And, while there might be opportunities for professional cowboys to earn big money, the real rewards come from the belt buckles — the insignia of their sport — and they take great pride in winning each one.

He blistered through 1997 with 8 major Professional Rodeo Cowboy Association (PRCA) wins, placing second in earnings for that year ($117,008). Add that to the $129,000 he earned on the PBR tour, and you can understand why someone might get on the back of a bull.  Davis’s career earnings in the PBR stand at $424,353, placing him 56th on the PBR All Time Money Earners’ list.  All this in six years, and before his 26th birthday.

Davis ripped into 1998 at his peak and was elected to the Professional Bull Riders Ring of Honor — the greatest feat a professional bull rider can achieve — and a humbling accomplishment for this Carolina cowboy. He stands tall with some of the greatest bull-riding cowboys ever: Jim Shoulders, Adriano Moraes, Justin McBride, J. W. Hart, and others, who "share a common bond of not only courage, strength and victory, but also honor."

That year — 1998 — was monumental for the great heights to which Davis soared, and the fall that ended his ride. "There ain't never been a bull that ain't been rode and there ain't never been a cowboy who ain't been thowed," is an old cowboy saying Jerome Davis knows well. Since the day of the wreck over a decade ago, he continues from a wheelchair — or a bobcat seat or a desk — working long days to keep his bucking bull and rodeo business up and running.

And, he gives back. These days, family is what the Davis Ranch in Archdale is all about. Each year, the Davis’s host a special rodeo for young hopefuls called The Annual He Paid Your Fees Rodeo. It is free; only a donation of canned foods for the needy is asked of the participants. Just like for the pros, buckles and saddles are awarded. The 2009 event garnered over 500 entries from all over the U.S., making it the largest rider-entered rodeo east of the Mississippi.

Alongside Highway 311 in Archdale, North Carolina, an unassuming yet official blue sign simply states “The Jerome C. Davis Highway.” An enduring monument to a Carolina cowboy who would simply reply “I thank you from the bottom of my heart."

1993-1997.
•Only bull rider in PRCA history to be ranked in the top five each year.
•Professional Rodeo Cowboy Association National Finals Rodeo qualifier
•Career earnings in PBR and PRCA exceed $1,000,000

1998.
•Elected to PBR Ring of Honor
•Leading in the PBR at the time of injury

The poetry at the start of the article is by the author.

hey man what a story i ride

You are awesome and i would

You are awesome and i would to thank for your help in the pbr. Your bulls are very good too. What hAPPENED TOBRAIN CANTER?

Awesome story about an

Awesome story about an amazing bull rider and written by an amazing man. Jerome is a true living legend. He continues to give, teach, motivate, and touch the lives of so many young cowboys in NC. My 4 children, one sheep rider and two calf riders and my daughter who runs barrels and poles, have all particiapted in and won buckles in Jerome's He Paid Your Fees rodeo. The event is a true testament to his care and concern for the young bull riders and cowgirls in the east. He is such a role model and source of encouragement for the future bull riders and the future of the sport. NC is proudly represented in the bull riding world by having such an amazing bull rider who is still able to impact the sport and lives of others even though he no longer rides.

Your refreshing comments say what I was trying to say in Jerome's bio. Truly, he is amazing. And I thank you for your kind words.
I'd like to add you and all the North Carolina rodeo mothers and fathers and families to the "Amazing List." Adios, God Bless, and Happy Trails, Rocky.

What a blessing it was to

What a blessing it was to meet you yesterday. I cannot begin to tell you how much it meant to me for you to help Hunter the way you did. I have printed this article for both boys to read and really enjoyed it myself!

If you could....remind me of the rider you said Hunter reminds you of....I cannot remember.

Take care and God Bless You!

Thank you. I'm glad I could help. The rider Hunter reminds me of is PBR cowboy Kody Lostroh.

When is the next event, and

When is the next event, and where do you post a schedule of events?

Thank you for your comment and suggestion. There are several organizations' Web sites listed in the "references" section above devoted to bull riding. It may be best to look on them for upcoming events. Unfortunately keeping upcoming events for various sports, entities, areas, etc. is beyond our ability. (We have a very small staff and many more entries to edit, link, find images/video for and add.) We appreciate the suggestion, however!

You are an inspriation to all

You are an inspriation to all of us.
May God continue to bless you.
We are proud to know you.
Brenda Casteel