The Wilmington Race Riot of 10 Nov. 1898 constituted the most serious incident of racial violence in the history of North Carolina. It has been variously called a revolution, a race war, and more accurately a coup d'état. The outbreak stemmed from an editorial published on 18 Aug. 1898 by the Wilmington Daily Record, an African American newspaper edited by Alexander Manly. In response to an appeal for the lynching of black rapists made by crusader Rebecca Felton in Georgia on 11 Aug. 1897, Manly wrote that white women "are not any more particular in the matter of clandestine meetings with colored men than are the white men with colored women." Moreover, Manly argued, many accusations of rape were simply cases where a black man was having an affair with a white woman. Because it involved the sensitive issue of interracial sexual relations, the editorial struck a raw nerve with many whites and led to bitter denunciations of Manly in the Democratic press. 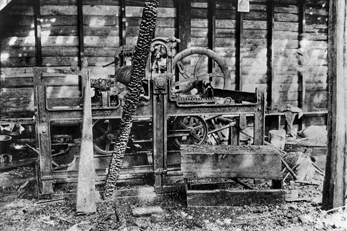 The entire thrust of the white supremacy campaign, in which the Democrats were attempting to regain control of state government, had been racially inflammatory. It was no surprise that after the Democrats, bolstered by bands of armed Red Shirts, overturned Republican-Populist Fusionist control of the state in the 8 November election, the Wilmington Democratic Party leadership decided to discipline Manly and take over the city administration. An order was issued under the name of Alfred M. Waddell, a former congressman and the Democratic candidate for mayor, that editor Manly leave the city with his press and inform Waddell of the action by 7:30 a.m. on 10 November. Unfortunately, Manly had already left Wilmington and the response by local black leaders to Waddell's ultimatum did not reach him in time to forestall the subsequent violence. A white mob of 400-500 people marched on the Daily Record office, smashed the press, and burned down the building. The rioters delayed a black fire company long enough to ensure destruction of the property. Thereafter white bands roamed the city, hunting down Fusionists and indiscriminately shooting into neighborhoods believed to be black political strongholds. Many African Americans fled to the forest outside of town. Waddell, backed by armed men, demanded and received the resignation of the entire city board of aldermen, including Republican mayor Silas P. Wright. Waddell immediately took over as mayor and appointed Democratic aldermen.

Republican governor Daniel L. Russell belatedly directed the state militia to stop the violence, but Walker Taylor, the Democratic commander of the guard at Wilmington, arrested only blacks. The new all-white city government forced selected white Fusionists, deemed "decidedly persona non grata," to leave town. In his Memoirs, Waddell boasted that the rioting Democrats had "choked the Cape Fear with [black] corpses." In fact, the most-often-cited estimates of black casualties place the number at 11 killed and 25 wounded. Only 3 whites were wounded. Nevertheless, one report noted that at least 2 whites were killed, and another placed the total death toll as high as 250.

Most modern accounts of the violence discount contemporary partisan news stories that a black mob, near the corner of Fourth and Harnett or Nixon Streets, fired the first shots in the riot. From the casualties it is clear that white Democrats did most of the shooting, while blacks were largely defending themselves.

The Wilmington race riot marked a bloody end to increased black participation in North Carolina politics, which had been made possible by Fusionist control of state government from 1894 to 1898. The emergence of an essentially all-white electorate and one-party Democratic rule was solidified two years later with the adoption of the disfranchisement amendment to the state constitution.

The painful legacy of the Wilmington race riot continues to be the subject of study. In 2005, after nearly a decade of research, a special commission formed by the General Assembly under the auspices of the Office of Archives and History released a report chronicling the riot and identifying its long-term effects on African American life in the area. The document concludes that the violence actually resulted from the actions by local whites to gain permanent and unchallenged control of the city. Because of the perceived success of the insurrection, Wilmington blacks were politically dispossessed and had no effective representation until the national civil rights initiatives of the 1960s.

David S. Cecelski and Timothy B. Tyson, Democracy Betrayed: The Wilmington Race Riot of 1898 and Its Legacy (1998).

Hi kelly,
thanks for fixing the link
this page was quite useful for my school project, so, thank you NCPedia!

Near every link in this entry

Near every link in this entry is broken? Is it possible to update the links?

Thank you for visiting NCpedia and alerting us to the broken links. I will contact our Digital Team and let them know.

The name Wilmington Race Riot is outdated and inaccurate. It should be Wilmington Insurrection, Massacre, or Coup d'État.

In her 1899 annual report, Mrs. William M. Parsley, President of Cape Fear #3 chapter of United Daughters of the Confederacy, stated the following:

"The unfortunate condition of affairs in our city last fall, and consequent very late return to their homes, of many members delayed the re-organization of our Chapter for work. On January 19th our first full meeting was held."

Apparently, numerous members had fled the city due to the violence. Normally, a UDC chapter starts its activities in September. However, the first meeting was not held until January 19.

Based on this statement, I'm guessing there might have been frightening tension and possibly smaller incidents of violence leading up to the major eruption on November 10. This statement suggests that many citizens felt unsafe, and those who had the means left town.

Glade to be apart of this by

Glade to be apart of this by sujay fuller

The link for Waddell is

The link for Waddell is broken.

Thanks for visiting NCpedia and letting us know about this!  I have fixed the link.