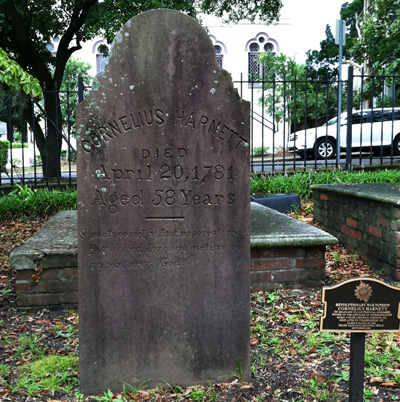 Description: The stone grave marker bears an inscription to the memory of Cornelius Harnett, North Carolina patriot and statesman. Although the marker indicates the date of death as April 20, 1871, the correct date of Harnett's death is more likely April 28, 1781. A small plaque commemorating Harnett is located in the ground in front of the marker. It was dedicated in 2009 by the Stamp Defiance Chapter of the National Society of the Daughters of the American Revolution.


Another Wilmington commemoration, the monument to Cornelius Harnett, a granite obelisk, stands across the street from the St. James Episcopal Church graveyard.

Dedication date: Sometime after April 28, 1871, the date of Harnett's death

Subject notes: Cornelius Harnett, Revolutionary patriot and statesman, was a leader in the resistance to the Stamp Act organized in the Lower Cape Fear area and chairman of the Sons of Liberty. He served as the first president of North Carolina's Provincial Council, also known as the Council of Safety, from 1775 to 1776, as a delegate to the Continental Congress, and was a signer to the Articles of Confederation. Harnett was captured in Wilmington in 1781 by the British during their occupation of the city. He died soon after his release from prison.

Location: The marker is located in the graveyard of St. James Episcopal Church, on the corner of 4th and Market Streets.

Landscape: The marker sits in the grass in the graveyard next to the church buildings. The graveyard is separated from the street and sidewalk by a low gridiron fence and is graced by shrubs, plantings, and mature shade trees.

In the description above, it

In the description above, it says "although the marker indicates the date of death as April 20, 1871," which seems like a typo at first glance. But then the dedication date is "sometime after April 28, 1871." The grave marker plainly says that he died on April 20, 1781. Was there a rededication in 1871? They have the same problem over at http://docsouth.unc.edu/commland/monument/424. This is a bit confusing.

The gravestone lists April 20th as the death date, but it is believed that this incorrect--that he in fact died on April 28th (see "Description" section at the top of the entry). Since it is unlikely that he would have been buried on the same day of his death, the gravestone/memorial would not have been "dedicated" until sometime after the day of his death. Part of the problem here, I think, is the use of the word "Dedication" for a gravestone--gravestones are not "dedicated" in the sense that public monuments are. However, since this data point was used for all monuments in the Commemorative Landscapes collection (because in the original Documenting the American South collection this was the name of the database field), it is replicated in NCpedia.