James Buren Sidbury, physician and pioneer in the establishment of pediatrics as a separate medical specialty, was a native of Holly Ridge and the son of Verlinza and Frances Williams Sidbury. After obtaining an A.B. degree from Trinity College, Durham (1908) and A.M. and M.D. degrees from the College of Physicians and Surgeons at Columbia University (1912), he served internships at Roosevelt Hospital in New York City in 1914 and New York Foundling Hospital in 1915. In the latter year he began practicing medicine in Wilmington, where he remained until his death.

On 6 June 1920 Sidbury established Babies Hospital at Wrightsville Sound to provide the most advanced pediatric care to the children of the area and to those of the summer visitors. The original hospital was destroyed by fire in 1927 and the present one built the next year. At first the hospital was open only for the summer months, but in 1939 it began operating during the entire year. Following World War II it was accredited to train pediatric residents. An affiliated nurses' training school was opened in 1942, and Sidbury donated the home for the nurses. The Babies Hospital Research Center was established in 1961. Sidbury is credited with introducing new methods of infant feeding, immunizations, and pediatric management, and with educating the public and the profession in many principles of pediatrics. The Babies Hospital closed in 1978, as there were more general hospitals able to care for babies and children. 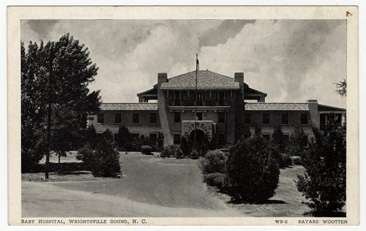 On 1 Jan. 1916 he married Willie W. Daniel (19 June 1889–23 Oct. 1948), the daughter of the Reverend William Wellington and Alice Rowena Aull Daniel. Her father, an attorney and a Methodist minister in South Carolina, became president of Columbia College in that state. Willie Sidbury had attended Columbia College and Columbia University in New York City. Active in local and state affairs, she was a member of Sorosis and president of the North Carolina Association of Parents and Teachers, the North Carolina Garden Clubs, and the North Carolina Medical Auxiliary. During World War II she was in charge of Red Cross volunteer work for the local chapter. After her death Dr. Sidbury gave the chancel window in Grace Methodist Church in memory of her many years of faithful service to that church.

Sidbury and his wife had three children: Billie (Mrs. Robert A. Little), Rowena (Mrs. Ivan Lenart), and James Buren, Jr. (m. Alice Lucas Rayle). Both Rowena and James became pediatricians. Dr. Sidbury, Jr., for a number of years was professor of pediatrics and director of the Clinical Research Unit at Duke University before serving as scientific director of the National Institute of Child Health and Human Development, Bethesda, Md.

The Sidburys lived at 15 North Fifth Street beside the First Baptist Church. Sidbury gave the home to the church, and it was used as a Sunday school. Portraits of him—both painted by William C. Fields—are located at Babies Hospital and in Duke Medical Center. James and Willie Sidbury were buried in Oakdale Cemetery, Wilmington.

In August of 1970, my child Kevin Neale Grogan was admitted to Rankin Ward at Duke Hospital under the care of Dr. Sidbury. His 2 prior siblings had died of myoglobinurea. The first child Marcia Paige Grogan age 4 was undiagnosed but died in 16 hours from onset of pain in arms and legs in December 1960 at Morehead Hospital in Eden NC. The second child John Grogan Jr died November 1969 in a second attack and was diagnosed with Myoglobinurea. Kevin had a first attack and on the second attack, Kevin and I were send to Dr. Sidburyin August 1970 In testing there, they percipatated an attack and was recovered by Dr. Sidbury and a resident. He died suddenly ( 5hours) the morning after Christmas. I remember Dr Sidbury saying he had seen Myoglobinurea but had never seen a case like this. he said he was looking for a "pig in a poke." He was calling it fatal myoglobinurea. We had a fourth child who never had an attack and is a beautiful 50. I have been documenting the children's cases for her and her children. I was trying to find Dr. Sidbury first name and the opportunity for me to share this came up. I was looking up myoglobinurea deaths and the answer was Zero. I know of 3. Are you aware if that death was documented at Duke? Dr. Sidbury was aware of Kevin's death.

Dr. Sidbury delivered my mother Joan McKenzie Chason in 1934 , she's was 3 lbs and daily watched by him as she was in an incubator for some time ! I also saw Dr Sudbury as a child. My parents also are members at Grace UMC where Dr Sudbury and his wife served for so long !