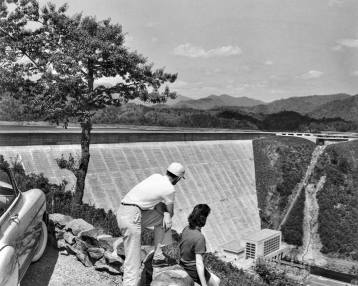 Fontana Dam, the largest dam of the Tennessee Valley Authority (TVA) system, is located on the Little Tennessee River in Graham County. Completed in 1945, it is a gravity-type concrete structure 480 feet high, 2,365 feet long, and 376 feet thick at its base. The six-story powerhouse of reinforced concrete with glass walls is located at the base of the dam. Typical of TVA engineering, Fontana is multipurpose, providing electric power, flood control, navigation, and recreation.

Fontana Dam was developed as a part of the war effort. Formerly owned by the Aluminum Company of America, the site had been acquired by the TVA after prolonged negotiations. Because it was situated in a remote, mountainous area about 60 miles from both Knoxville, Tenn., and Asheville, N.C., highways, bridges, and rail lines had to be built to bring in construction equipment, supplies, and workers.

In this wilderness, the TVA built a community for 5,000 workers and their families. The construction camp included 19 dormitories, a cafeteria with a capacity to serve 1,000 people, a community building, a recreation facility, refreshment stands, and a softball field. The permanent village, a mile downstream from the dam site, included nearly 400 houses and 400 trailers. The village featured a 50-bed hospital, a business district, two racially segregated schools, libraries, softball fields, recreation buildings, refreshment stands, and movie theaters.

Fontana's employees maintained three eight-hour shifts, around-the-clock, seven days a week. Because of this accelerated schedule, construction time was slashed almost to half of what it would have been in peacetime. To inspire the workers, military marches and big band music was piped over an intricate public address system that reached the camp, ball fields, cafeteria, and recreation halls. Bright floodlights illuminated the site, and signs everywhere reminded the inhabitants of their patriotic mission in the war effort.

In November 1944 Fontana Lake began to fill, and on 20 Jan. 1945, three years after construction had started, the powerhouse produced electricity for the first time. The project had cost $74.7 million, consumed 2.8 million cubic yards of concrete, and required 34.5 million man-hours to build. The dam created a reservoir of more than 11,000 acres with a 240-mile shoreline and a drainage area of more than 1,500 square miles.

By the early 2000s, the three generating units at Fontana Dam had a total productive capacity of 225,000 kilowatts. In addition, the TVA controlled flooding of the Little Tennessee River through a process of storing and releasing water from the reservoir. Recreational activities included fishing, boating, and swimming on Fontana Lake. The Appalachian Trail, which extends over 2,000 miles from Georgia to Maine, crosses the top of Fontana Dam.

My maternal great grandfather is said to have designed the dam as well as Kerr Dam. Can anyone confirm? His name was Tommy Lee Ritchie.

Thank your question and contacting us.

The creation of the dams was a federal project rather than state and with the Fontana it was created under the Tennessee Valley Authority (TVA).  A few places you can look to find information would be the Library of Congress, the National Archives, the National Parks, and the TVA. Below are websites to help:

I hope this helps and if you have further questions, feel free to contact us at https://statelibrary.ncdcr.gov/contact-us/contact-us-form

The last vacation my family

The last vacation my family had before my precious father died with MS was to Fontana Dam...
There was a wonderful play that told the story of the Dam construction and the impact on Native Americans due to this...
Is this still offered?
I’m wishing to share this and the magnificent engineering, and the sights...
Any current information will be greatly appreciated!

This is an encyclopedia article about the dam. I suggest you contact them directly for more information. https://www.nps.gov/grsm/planyourvisit/fontanadam.htm

I have been told I have

I have been told I have family grave sites buried under the waters of Fontana Dam. My family origin is frim Swain County, NC.

Yes, the government promised to build a road that would get them to the grave sight. You probably will not be surprised but the road is still not constructed.

I, also, am interested in Japan, NC. my mother-in-law was born there in 1898. She move to Ohio sometime before 1930, not sure when. She once remarked that she had attended a singing school when she was a girl. Do you have any information on such schools?
Thank you.
Charlotte Gunther (used to be 'Gunter')

Came across these NC State

My mother-in-law, Bobbie Sue Taylor, who recently died, always said she was born in Japan, NC in 1935. My wife has seen the birth certificate. Japan, NC is supposedly at the bottom of Fontana Lake. Trouble is that I can find no record of it's existence on-line. Did it exist? My Mother-in-law pronounced this as "jay-pan". Any help would be appreciated.

Yes, my mother-in-law was

Yes, my mother-in-law was born there in 1898, in "jay-pan" . I would like to see a map of those underwater towns.
Here is a link of photos https://www.slideshare.net/mwoodfin1/proctor-nc-slideshow