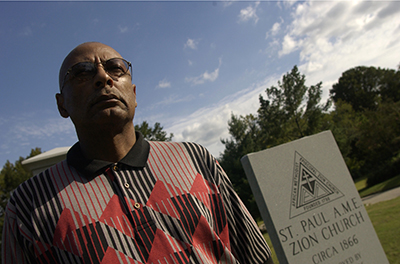 Rudolph Knight is the caretaker of Tarboro's African-American past. Even as a child, he treasured his elders' stories about the Eastern North Carolina town, especially the stories from the 1880s and '90s when Tarboro was heart of the "Black Second, " the majority-black 2nd Congressional District. In those days, Tarboro was home to a remarkable generation of African-American political leaders, including U.S. Rep. George Henry White and Knight's great-great-uncle, Mayor Franklin Dancy.

As guiding light of the Phoenix Historical Society, one of the state's few African-American historical societies, Knight has organized a spellbinding tour of Tarboro's black community. Highlights of past tours have included a gospel music performance by the choir at St. Stephen Missionary Baptist Church and a moving rendition of George Henry White's last speech to the U.S. Congress by Special Superior Court Judge G.K. Butterfield.

Recently Knight gave me a glimpse of the historical society's next tour. Here are bits and pieces of our walk through his hometown's past. He started the tour at 99 Main St. on a hill overlooking the Tar River.

"This is the first site on the tour, the Quigless Clinic. Dr. Milton Quigless was a graduate of Meharry Medical College. He came to Tarboro in 1936 at a time when, he used to say, "black people were dying like flies out in the country." Through tradition and custom and probably state law, he wasn't allowed to practice at Edgecombe General, so at first he treated people in their homes and later he converted an old fish market into an office and saw his patients there.

"In 1946 the old fish market was torn down and this two-story brick building built. It was the only black-run clinic east of Raleigh that served African-Americans as inpatients. He had a thriving practice for 60 years. People came from all over northeastern North Carolina. He had an operating room, a pharmacy and, of course, a maternity ward.

"I was born here in this building, and Dr. Quigless attended to me. Even when I was a grown man, he always referred to me as 'Baby Knight.'"

After we visited St. Stephen Missionary Baptist Church, we walked to 300 Granville St .

"The next stop on the tour is the George Henry White house. White was the last African-American congressman at the end of Reconstruction. He married a lady from Tarboro. This lady's mother, Mary Jones, was the wealthiest lady in Tarboro in the 1860s. She had a relationship with a John Lloyd, the white owner of Lloyd farm, and she had two daughters, and George Henry White married one of these daughters, Cora. They lived here until he left Tarboro in 1901.

"The people like White that were politically active, those that were considered upper-middle class, fell into the grips of the Jim Crow laws at the turn of the century ... 1900, 1901, 1902. They were just squished down. What they did do ... and they were able to do it financially ... they got out of Tarboro and went to points north ... Washington, D.C., Philadelphia, New York.

"Of course, if you knew your place, you were safe. Most of the African-Americans that were politically active and leaders in Tarboro evidently did not know their place."

He paused by a vacant lot where three monuments stand.

"This is where St. Paul AME Zion Church sat, and the ex-slaves started it in 1865, the first black church in Tarboro. St. Paul also had a church school that was the first school for blacks in Tarboro. It was founded in 1869, and public schools didn't start in Tarboro until 1881.

"What's not here is the church, which faced out on St. David Street. It was destroyed by the flood of 1999. That morning I came up here, and, when I met the water in the middle of the street, I knew we were in trouble. The church was completely submerged. That congregation, before it disbanded, erected three monuments to commemorate the church's history."

He showed me several other sites, then led me to a two-story plank building at 415 Panola St .

"This is the Mount Lebanon No. 25 Masonic Hall. It was founded in the late 1880s and has the distinction of being the oldest continuously active lodge of African-Americans in North Carolina. It was a meeting hall, and this was the scene of a lot of political activity. The next safest place for African-Americans to meet, next to their churches, was at their lodges, out of the scrutiny of whites.

"The lodge itself served as a self-help organization. They would help you with burials if you had a death in the family, help you during illnesses, and they even employed a doctor to take care of Masons and their families."

At the tour's last stop, we visited the most beautiful Victorian cottage I have ever seen.

"This is the George Matthewson house that was built in 1868. He was an African-American carpenter. He helped build Town Hall, the Presbyterian church and a number of the town's other public buildings, and he built his house. He did all the work. Even the fence is original, and the hitching post is original too, where you would tie your horse right here in the yard. It was the first house in Tarboro that had running water, and the house contains 728 panes of glass, 635 of them stained glass."

As we walked back through a cemetery, I asked Knight how the tour had started.

"When the Tarboro Historic District's boundaries were drawn, there were no African-American structures included, so I said, well, let's do our own tour and let's celebrate what we have. Even during African-American history month, I've always been against putting people from other parts of the country in the spotlight. We have our own local people that we can talk about. I wanted to make sure our students and citizens understand that we have history right here."

Very nice of him to do this

Very nice of him to do this piece. Thought me some things