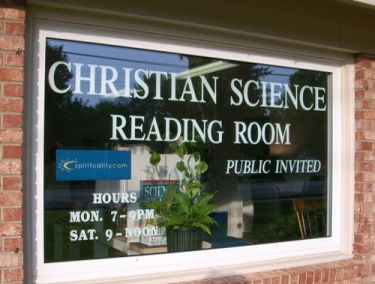 I really feel like I need to add more to my explanation, as so many people have such a misconception of what Christian Science really is - and so many also confuse it with Scientology. Christian Science is completely Bible based .............based on Christ Jesus' statement " He that believeth on me, the works that I do shall he do also; and greater works than these shall he do; because I go unto my Father." Christ Jesus told us that we can heal just as he did.
When I first read this website's explanation of Christian Science, it sounded weak - especially the part that says of Mary Baker Eddy, “her BELIEF that she herself was healed through FAITH in God.” It makes it sound as if it was just Mary Baker Eddy's BELIEF that she was healed, and not the fact that she WAS healed after she was examined by a doctor, and after the doctor and all her friends gave up on her as being beyond help. I also felt that the exact Bible passage that gave her the spiritual uplift to see and understand that, just as Christ Jesus knew of all the people he healed, our life is “not of this world” but is actually IN God. THAT realization, or discovery, is what brought about her complete recovery, and not just a “belief” that she was healed. Christian Science is not a "faith-based" religion, but one based on the UNDERSTANDING of the words and works of the Bible, and the resulting healings that come about through that understanding, of which the Bible gives us many, many examples. It is also based on the fact that, as St. John says in the Bible, "God is Love". We follow God's example by loving our neighbor - every neighbor in the world - as ourselves.

I am a life-long Christian

I am a life-long Christian Scientist who moved to North Carolina 3 years ago and am a member of the Christian Science Society in Chapel Hill. I am reading what you wrote about the churches in NC over 10 years ago, and am suggesting just a few updates be made in your explanation. The first sentence after the words "Bible and" should instead read "and in her own healing in 1866 from a fall on the ice which attending doctors stated as fatal, and from which she was completely healed after reading Matthew 9 of Jesus' healing of the man sick of the palsy, after which a divine revelation flashed upon her receptive consciousness and produced instantaneous healing. " And after that change continue with what is already written about her subsequent writings. This sentence I've asked you to change will explain much more clearly how and why Mary Baker Eddy founded Christian Science. Could you please let me know when you make this change? Thank you so much...

I very much appreciate you taking the time to suggest an amendment and clarification to the article.  This article was originally published in the University of North Carolina Press’s print volume the Encyclopedia of North Carolina. The content is currently under copyright by the Press and licensed to NCpedia, and so I am not able to make changes to content that are not strictly factual errors.  However, your comment will stay with the article for additional information for all visitors.

Please let me know if I can answer any questions about NCpedia.