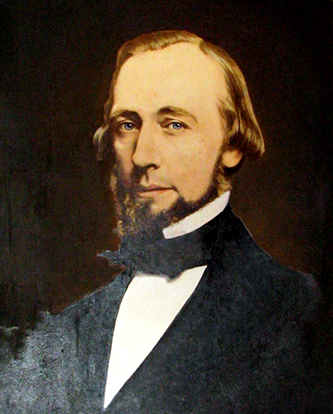 John White, merchant and commissioner for North Carolina in England during the Civil War, was born in Kirkcaldy, Fifeshire, Scotland, one of ten children of Andrew Whyte and his second wife, Hannah Bolton. In December 1828 young John Whyte sailed from Kirkcaldy for New York en route to Warrenton, N.C., where his half brother, Thomas White, had previously settled. After a few years in school he was employed in a firm operated by his half brother and Peter Mitchel. In 1836 he became a partner, and when Thomas moved to Petersburg, Va., he took over the business, which he conducted until the outbreak of the Civil War. Like his brother before him, he changed the spelling of his surname.

On 28 Nov. 1838 White married Priscilla Bella Jones of rural Warren County, who came from an old, well-established family in the county. Between 1850 and 1852 they engaged the services of the architect Jacob Holt to build for them a large Italianate house in Warrenton where they lived for the remainder of their lives.

Early in the Civil War the demand for cotton abroad made it a valuable commodity for those who could ship it through the Federal blockade of Southern ports. To support its war effort the state of North Carolina sent John White to England to borrow money and secure credit on state warrants payable in cotton and rosin. White was appointed agent and commissioner for the state and sailed in November 1862. Traveling by way of Nassau and Liverpool, he reached London on 5 Jan. 1863. He succeeded in selling a large amount of cotton bonds for bales of cotton to be delivered to blockade-runners at North Carolina ports. The London firm of Alexander Collie and Company, through which he negotiated these transactions, also sold most of the supplies that he purchased.

White was accompanied to England by Captain Thomas Morrow Crossan, his neighbor from Warren County, formerly of the U.S. Navy and an officer in the small North Carolina navy. With the proceeds of a £100,000 loan from Collie and Company, White purchased North Carolina's first blockade-runner, the Lord Clyde, a side-wheel passenger steamer running between Glasgow and Dublin. It was converted into a blockade-runner with high-pressure boilers at the shipyards of John Key, who married White's sister, Sarah Whyte. The Lord Clyde was renamed the Ad-Vance presumably in honor of Governor Zebulon B. Vance, his wife Adelaide, and the ship's pioneering purpose. With a cargo from Liverpool, the Ad-Vance ran the blockade for the first time on 3 July 1863. Under the command of Crossan, the Ad-Vance proved to be the state's most famous blockade-runner.

White's successful completion of his assignment paved the way for the eventual provision of $12 million worth of goods—including blankets, shoes, socks, jackets, shirts, trousers, munitions, and medicines (especially quinine)—about half of which went to Confederate states other than North Carolina. Not surprisingly, throughout the war North Carolina's regiments were better clothed and equipped than those of any other state in the Confederacy.

In the fall of 1864 White made a second trip to England. He left Warrenton on 2 August with his wife and their children Mary, Sue, Kate, Andrew, and Hugh, expecting to sail for Liverpool. After a stopover in Raleigh, they arrived in Wilmington on 5 August. For over a month they remained on board the Ad-Vance and at the home of a friend in Wilmington while making repeated attempts to run the blockade. After nine failures, in which the Ad-Vance continually ran aground and faced hostile Union vessels offshore, White decided that the risks were too great and returned his family to Warrenton on 10 September. Soon afterwards, having made a total of eleven successful trips between Wilmington and Nassau, the Ad-Vance was captured a few miles from Wilmington. The seizure resulted from the ship's use of North Carolina soft coal; on a bright moonlit night, the dense cloud of black smoke produced by the coal betrayed her presence to a Union cruiser near the mouth of the Cape Fear River.

White sailed alone from Smithville (now Southport) on 26 October on board the Virginia, arriving at Bermuda two days later. He did not go ashore, however, because of yellow fever. Nevertheless, White contracted what was diagnosed as bilious and yellow fever and as a consequence did not reach London until the day before Christmas 1864. After the fall of Wilmington, there was no word from him until late May 1865, when an open letter—sent through a friend in New York, ostensibly to arrive by truce boat but forwarded instead to White's nephew in Petersburg and from there to Warrenton—reached the family. White was unable to return to North Carolina until that summer.

The war having ended, White undertook business in Petersburg but in the fall of 1867 decided to establish a cotton brokerage office in Liverpool. This time he took his family with him but after nine months abandoned the project. He returned to Warrenton where, as a devoted member and vestryman of Emmanuel Episcopal Church and the grandfather of thirty-six children, he remained until his death.

In April 1870 Robert E. Lee and his daughter Agnes were the guests of White and his family at their home in Warrenton. The Lees were there to visit the Warren County grave of Annie Carter Lee, the general's daughter, who had died of typhoid fever at Jones's Springs in October 1862.

John White died suddenly of a stroke at his home after returning from gathering wood chips in the backyard. He was buried beside his wife in the family cemetery behind the house. In September 1897 the Warren County Camp of United Confederate Veterans was named the John White Camp in his honor. The North Carolina Museum of History has a portrait of White.

Walter Clark, ed., Histories of the Several Regiments and Battalions from North Carolina in the Great War, vol. 1 (1901).

I'm working on my family tree

I'm working on my family tree, one line of which I can trace back to the shipbuilder, John Key, and his wife, Sarah White/Whyte (my 3x Great-grandparents), mentioned in the article above.

I have very little information about their family except for via a copy of a transcribed extract from "Mary White's Diary, kept while she was visiting her Scotish relatives", dated "circa 1867". This extract (perhaps about 7000 caracters in length, on 2 sides of A4 paper) was sent to me in 2004 by a Great-Uncle (now deceased), and I'm not sure where he got it from!

Can anyone tell me - are Mary White's Diaries published, or available to access, somewhere? (I'm in the UK).

I note that there is a book; "Women of the Civil War South", by Marilyn Mayer Culpepper, which contains "excerpts" from Mary White's diary. But I'm not clear how much of Mary's diaries that book contains, or whether it contains the things that I'm interested in!

I would like to find out more about the Key/White families, and about Mary White's diaries and what information they contain about her wider family. The little bit of the Key/White family tree that I currently know best is that of one of Mary White's cousins, Sarah Hannah Key, who married Henry William Hutchison (my 2x Great-grandparents), and whose descendants I have a good record of. You can see what I know about my Great-grandfather's ancestry via my blog at; https://afamilyhistoryblog.wordpress.com/family-trees/hutchison-tree/

Douglas Southall Freeman refers to the home of John White in his biography of Robert E. Lee. The home is in Warrenton, NC and is called "Ingleside". I can't find any info on this, can you tell me anything about it?

Thank you for visiting NCpedia and sharing this question.  I am unable to find a reference to the home of John White called "Ingleside."  I haven't pulled Freeman's book to look at the reference and am wondering if was referring to the community of Ingleside which is located near Warrenton (just inside northern Franklin County).

And here is a link to the National Register of Historic Places listing for White's house, called the White-Colman house, in Warrenton where Lee was reported to have visited: http://www.hpo.ncdcr.gov/nr/WR0004.pdf.

Excellent article on my Great

Excellent article on my Great-Great Grandfather ! My mother spoke many times of her fond memories of her Grandmother Catherine Augusta White Williams.