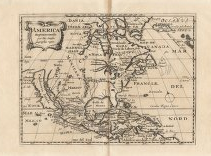 William Drummond (ca. 1620-1677), first governor of Albemarle County, was given the responsibility by the Lords Proprietors to establish a government. He proved to be a capable leader whose efforts laid the foundation for representative government in North Carolina. Born and educated in Scotland, Drummond settled in Virginia as an indentured servant to Theodore Moye in 1637 and later to Stephen Webb in 1639. He was not a docile servant becoming involved in a plan with other indentured servants to run away; however, the plan was a failure. For his role, Drummond received a public flogging and an extension of his servitude by a year.

Drummond greatly improved his position in Virginia society by the 1650s. He became a large landholder, a prosperous attorney, and evidently a merchant. He also served as a justice of the peace and the high sheriff of James City County. In the early 1650s, Drummond married Sarah Prescott; they had at least five children. The Lords Proprietors commissioned Drummond as the first governor of Albemarle County in December 1664. Proprietor and Virginia Governor William Berkeley apparently was influential in securing the position for Drummond because of their friendship.

The Lords Proprietors furnished Drummond with instructions to create a government composed of a council and an assembly that had authority over 1600 square miles. Drummond wasted little time in establishing a functioning government. The first assembly convened by June 1665. Among its first actions was the issuance of a petition to the Lords Proprietors requesting a liberalization of the land policies.

The first governor of Albemarle County provided competent leadership for the developing colony. Drummond proposed new land policies to the Lords Proprietors because he felt the existing policies discouraged new settlers and forced current ones to leave. The proprietors, however, did not act upon his proposal. Drummond worked to settle the boundary problem between Albemarle and Virginia. Following attacks by Tuscarora Indians on Chowan River settlements in 1666, Drummond mobilized the colony for possible war. The troubles were settled before the fighting spread. He negotiated an intercolonial agreement with Virginia and Maryland to stop the planting of tobacco from February 1667 to February 1668. The hope was that, by stopping the planting of tobacco for a year, prices for the commodity would rise. However, Maryland pulled out of the plan causing it to fail. During his governorship, Drummond’s friendship with Berkeley deteriorated. He openly accused Berkeley of trying to hurt the development of Carolina. The animosity between the two apparently started over a dispute regarding land leases in Virginia.

Drummond’s term as governor ended in 1667. He returned to his Virginia plantation and remained active in business affairs. In 1676 Drummond joined with Nathaniel Bacon in the rebellion against the government of Governor Berkeley. After the defeat of Bacon’s followers, Berkeley’s army captured Drummond on January 14, 1677. Six days later, he appeared before a court martial board charged with treason and rebellion against the king. Drummond was found guilty and was hanged that same day.

Hello, I'm wondering if there

Hello, I'm wondering if there are archival holdings of papers of William Drummond during the time he was governor of Albemarle. I'm researching Scottish merchants in the Albemarle region of North Carolina in the latter part of the 1600s and early 1700s.

Thank you so much for

Thank you so much for contacting us here at NCpedia. I looked in a few places and I don't see mention of archival papers. That being said, there is still quite a bit of material that is not yet online. I suggest you contact the State Archives of North Carolina. They may be able to help you or at least point you in the right direction. Here is a link: https://archives.ncdcr.gov/contact/questions-about-services-or-research

Thank you again and good luck!!

Hello,
I am researching my husbands family, and have hit a road block with WIlliam Drummond's wife Sarah. Do you have supporting documentation for Sarah Prescott being the correct Sarah?
Thank you.

I am searching for the same

I am searching for the same thing. Has documentation been discovered re: Sarah Prescott??
Thank you!

Are there any portraits

Are there any portraits available of William Drummond?

That's a great question. I haven't been able to find one, either. I would suggest you contact the State Archives. Perhaps they can shed some light on this. Surely others are wondering the same thing!

Hello! I am a descendant of

Hello! I am a descendant of William Drummond (ca. 1620-1677), first governor of Albemarle County. I currently live in South Florida and am planning an ancestry journey to take place the first week of October. I am driving up to Valley Forge, PA to attend a family wedding. After the wedding, I plan on discovering the paths my ancestors once walked. If at all possible, could you point me in any direction, if there are any landmarks or historic signs that may still hold the Drummond name? I greatly appreciate any time and effort put into helping me with this journey. I am already touring Bacon's Castle in Virginia and also Lake Drummond. There are hundreds of sites, but to be quite honest with you, it can get quite confusing. So much information to absorb all at once.
Respectfully yours,
Christine

Thank you for visiting NCpedia and taking time to share your history and question.

That is a very good question.  I believe that you will likely find more specific locations in Virginia since he would have spent more time in Virginia.  As the earliest of the region’s – the Albemarle’s – first proprietary governors, Drummond did convene the first legislative body organized in Carolina near present day Elizabeth City in Pasquotank County in 1665.  This area would have been one of the earliest places of colonial settlement, although the area that is now North Carolina was more a less a wilderness in the mid-17th century. I don’t believe that there are any buildings that are associated with his presence.  Although, you might enjoy visiting that area for its colonial history, particularly in association with the Dismal Swamp and its canals.  I believe that Lake Drummond, the freshwater lake on the Virginia side of the Dismal Swamp, was named after Drummond.

You may also find some useful information in the resources included with the NCpedia article your visited.  Here are additional search results for NCpedia entries that are about or mention William Drummond: http://ncpedia.org/gsearch?query=william+drummond

Good luck with your trip and best wishes.  And please let me know if I can help with anything else.