Longtime Chief of the Waccamaw-Siouan 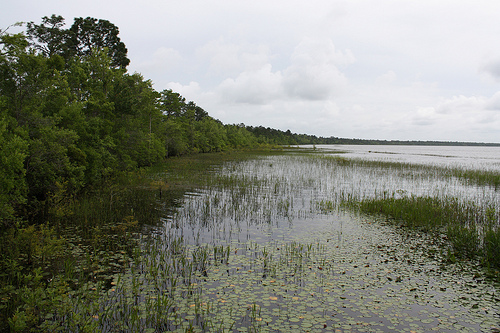 Priscilla Freeman Jacobs (b. 1940) led the Waccamaw-Siouan, a state-recognized American Indian tribe, from 1986 through early 2005. During that time, she represented her tribe at many civic affairs and presented educational programs about the traditions and culture of her people. When the position of chief came open following the death of her father Clifton Freeman (1919–1985), Jacobs’s brothers encouraged her to accept this leadership role, since she had worked alongside their father for many years. Thus she became the first woman in the twentieth century to hold the position of chief in her tribe.

Jacobs grew up in a traditional Indian family in the Ricefield area of the modern Waccamaw-Siouan community, which is situated on the edge of the Green Swamp about thirty-seven miles from Wilmington. For five generations, the men of her family made a living in the “woods work” of logging and forestry. The women kept house, tended the gardens, and helped their menfolk raise cows, pigs, and chickens to feed their families. The rural lifestyle promoted the values of co-operation, hard work, respect for elders, and obedience. Jacobs was educated in the American Indian schools that her grandfather W. J. Freeman and great-uncle R. T. Freeman convinced Columbus County officials to open during their years as tribal chiefs (1920s–1960s). The Indian schools taught basic literacy, mathematics, history, and respect for Indian heritage. After graduation from the Waccamaw Indian School, she completed a secretarial course at Miller Mott Business College of Wilmington and put her skills to work in her father’s logging business. In 1961 she married Welton Jacobs, who is also Waccamaw-Siouan. They have two children, four grandchildren, and three great-grandchildren.

Priscilla Jacobs’s inauguration as chief was held at Frontier Fort near Wilmington in 1986. She followed in the footsteps of her grandfather, great-uncle, and father when she accepted this duty. And preserving Indian heritage involved many sacrifices and hours of hard work. When still a small child, Jacobs listened to community elders assembled at her grandfather’s house on Sunday afternoons discussing issues of Indian education. Although some counties in North Carolina did fund separate schools for Indians, Priscilla’s county did not. Many Indians wanted separate schools in order to educate their children about their heritage. Priscilla’s grandfathers—W. J. Freeman and Alec Patrick— and great-uncle R. T. Freeman and others worked hard to attain these schools for their children. By 1949 they sought federal support and asked the U.S. Congress to pass the Waccamaw Bill, which would grant them federal acknowledgment as an Indian tribe.

Jacobs, who was only nine years old at the time, journeyed to Washington, D.C., with the community delegation to present the case to Congress. The Congress favored terminating federal responsibilities to tribes in 1950, so the bill did not pass into law as hoped. In these formative years, Jacobs became aware of the wider Indian world and issues facing Indian people. When her father, Clifton Freeman, became chief in 1964, he worked to secure jobs, improve roads, and network with Indians throughout the United States. She traveled with her father to meetings around the country, learning about the important challenges facing Indian people.

Long before she became chief, Jacobs labored hard for her people. She played a central role in bringing the popular Indian powwow to her community (around 1969). She taught the children Indian dances and educated them about their history. At first, powwows were small family affairs held on church grounds or at Lake Waccamaw, but they grew larger as time passed. With her father’s support, Priscilla approached International Paper Company asking for a donation of five acres of land that could serve as a center of tribal life, and her request was granted. Since 1974, powwows have been held on the tribal grounds next to the day care, office, and ball field. (Today, the Waccamaw-Siouan tribe owns thirty acres in Buckhead.) In 1971 the state formed the N.C. Commission of Indian Affairs as a government office devoted to helping American Indians. Jacobs was the first secretary of the commission’s board of directors; later she worked for the commission as a community developer. With her father, she represented her tribe at meetings of the Coalition for Eastern Native Americans, an organization active between 1971 and 1973 that offered assistance to tribes in the East. She participated in the N.C. Indian Unity Conference and offered many educational programs for Indians throughout the state. To help her community develop economically, she joined her father and others from the tribe in forming the Waccamaw-Siouan Development Association (WSDA). WSDA continues to work on projects of education, economic development, and culture.

Jacobs is also a spiritual person. In fact, her leadership combines both her social-political role with her spiritual life. She was one of the first women in her tribe to become a pastor, and her ministry has included television broadcasts and leadership in various small churches. She has been a pioneer for women of her generation by breaking out of stereotypical roles to pursue goals for her community in the wider American Indian world.

At the time of the publication of this article, Dr. Patricia B. Lerch was a professor in the Department of Anthropology at the University of North Carolina at Wilmington. In 2004 the University of Alabama Press published her book Waccamaw Legacy: Contemporary Indians Fight for Survival. She has worked with the Waccamaw-Siouan as a researcher, while the tribe has fought for recognition.

This was a beautiful and very

This was a beautiful and very informative article. Thank you so much for shedding light on this phenomenal woman. She has always been an inspiration to me. Very proud to call her family.

Ms. Priscilla is an

Ms. Priscilla is an inspiration to the Waccamaw Siouan People, as an advocate and how she worships our Lord and savior. She will forever be the best chief of my times, humble, God fearing, approachable and most importantly Loving.