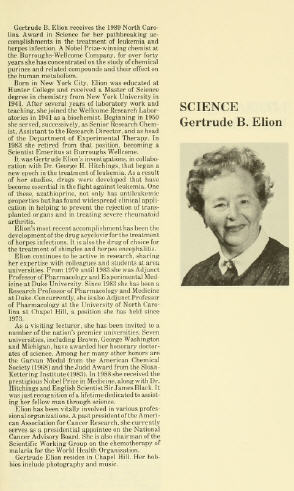 Every day, scientists around the world search for new ways to fight diseases. Two scientists who did some of the most important research in that fight during the 1900s worked in North Carolina. Gertrude Belle Elion and Dr. George H. Hitchings first teamed up in 1944 at the Tuckahoe, New York, offices of Burroughs Wellcome Company, now known as GlaxoSmithKline. In 1970 they moved to the pharmaceutical company’s new offices in North Carolina’s Research Triangle Park, and in 1988 they shared the famous Nobel Prize in Medicine with Sir James Black, of England. The research that Hitchings and Elion did helped people battling illnesses, including leukemia. Their Nobel Prize honored revolutionary discoveries of “important principles for drug treatment” and important discoveries of actual drugs.

In a way, the two scientists’ work partnership started by chance. Elion happened to come in for an interview on a weekend when it was Hitchings’s turn to work and to do job interviews as needed.

When she earned her degree in chemistry in 1937 from Hunter College in New York City, Elion (1918–1999) had felt excited and ready to start work in a laboratory. Her excitement faded, though, when she could not get hired. The Great Depression had made jobs difficult to find. And women had an extra hard time finding jobs in science. Years later, Elion would say that job interviewers turned her away after telling her that she might be qualified— but would be “a distraction” in a lab full of men. She taught biochemistry to nurses, substitute taught in secondary schools, worked for free in a chemistry lab, and spent time in secretarial school. About the time that Elion finished her master’s degree in chemistry at New York University, however, World War II began sending many men overseas to fight. New doors opened for women back home. She got a job in a food company’s lab and spent more than a year doing work such as testing pickle acidity, judging the color of mayonnaise, and checking that berries for use in jam were mold-free.

Elion had left the food lab for a temporary job with Johnson and Johnson when she met Hitchings (1905–1998), a respected researcher whose schedule included every other Saturday. Not long after meeting with Elion—who had telephoned Burroughs Wellcome earlier in the week—Hitchings gave her a job. He had no problem hiring women or men from different backgrounds, or sharing his knowledge with those eager to learn. 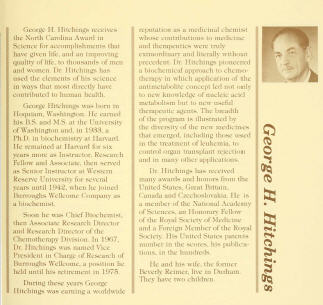 Personal loss shaped the careers of both scientists. Hitchings had been born in Hoquiam, Washington, to a family that designed and built ships. When he was twelve years old, his father—who was very interested in science—died after being sick for a long time. The experience of losing his father made Hitchings want to work in medical research. After earning bachelor’s and master’s degrees in chemistry from the University of Washington, Hitchings received his Ph.D. in 1933 from Harvard University. At Harvard, he studied something that few people knew much about at the time: the metabolism of nucleic acids (DNA, the building blocks of the human body). After working for a while at several colleges, in 1942 he became the only scientist in Burroughs Wellcome’s United States Biochemistry Department.

Elion was born in New York City, the daughter of immigrants from eastern Europe who wanted her to get an education and pursue a career in something she loved. When she was a young teenager, her beloved grandfather died painfully from stomach cancer. In the early 1940s her fiancé, Leonard Canter, died from a heart infection that penicillin probably could have cured just a few years later. Elion—who earned her bachelor’s degree at a college offering free tuition because her family had lost its money after the 1929 stock market crash— never finished her Ph.D., unusual for someone doing work of her kind. A school official had told her that she must take classes full-time, not only at night. But she could not afford to quit work. She quit school instead.

Hitchings, Elion, and their coworkers did research differently from most scientists at the time. Instead of using a random, trial-and-error process—testing chemicals, compounds, and plant products in hopes of stumbling onto medicines—they specially designed chemicals to inject, or shoot, into diseased cells. This could “trick” a cell into accepting a false building block of DNA and fighting off the disease. The scientists had studied differences in the way normal human cells, diseased cells, protozoa, bacteria, and viruses worked, as well as their structures. They could make drugs to attack a problem—for example, stopping cancer cells’ growth—without hurting nearby normal cells. Other researchers started working the same way.

“We were inspired by basic questions concerning the biochemistry of cellular reproduction, and the search led us on a journey filled with new knowledge and exciting discoveries. . . . When William Faulkner accepted the Nobel Prize in Literature in 1949, he spoke of the verities of the human heart—love and honor, pity and pride, compassion and sacrifice. As a scientist, I should like to suggest three verities of the human mind— curiosity, creativity, and the love of knowledge. The Nobel Prize in Medicine honors these truths, and we receive this recognition with humility and gratitude,” Hitchings said in a speech at the Nobel Prize banquet in Sweden on December 10, 1988.

The work of Elion and Hitchings led to drugs to fight leukemia, malaria, gout, organ transplant rejection, rheumatoid arthritis, and some bacterial infections. The scientists laid the foundation for work leading to medicines to fight viruses that cause cold sores, chicken pox, and shingles, and leading to AZT, the first treatment for AIDS. “When we began to see the results of our efforts in the form of new drugs which filled real medical needs and benefited patients in very visible ways, our feeling of reward was immeasurable,” Elion wrote in an autobiography for the Nobel Foundation (Les Prix Nobel, http://nobelprize.org).

Hitchings and Elion had many patents, publications, and awards. They made a difference in other ways, as well. A former leader of the charitable Burroughs Wellcome Fund, Hitchings in 1983 founded the Triangle Community Foundation, a nonprofit group that today
manages charitable funds worth more than $100 million and awards many grants and scholarships. Often quoted that his approach to life was based on two-thirds science and one-third philanthropy (helping others), Hitchings served as a local leader of such groups as the United Way and the American Red Cross. For years, Elion taught at Duke University and the University of North Carolina at Chapel Hill. She served on the boards and committees of many professional and nonprofit groups, mentored young scientists, and spoke to young students about loving science and following dreams.

Elion always was a pioneer for women. When Hitchings became vice president in charge of research at Burroughs Wellcome in 1967, she filled his old job as head of the Department of Experimental Therapy. She received the National Medal of Science from President George Bush in 1991. That same year, she became the first woman inducted into the National Inventors Hall of Fame, honored for important work on a drug called 6­mercaptopurine. Starting in the 1950s, it offered new hope in the fight against leukemia, a cancer that killed many children quickly. Continued study led a few years later to a related drug that blocked the human body’s rejection of unrelated tissues, allowing the first kidney transplants from nonfamily donors. Arranon, a drug recently approved in the United States to fight some kinds of leukemia and lymphoma, started with teamwork that Elion took part in near the end of her life, according to the GlaxoSmithKline Web site (http://www.gsk.com/).

“My greatest satisfaction has come from knowing that our efforts helped to save lives and relieve suffering,” Hitchings wrote in his Nobel Prize autobiography. “When I was baptized, my father held me up and dedicated my life to the service of mankind. I am very proud that, in some measure, I have been able to fulfill his hopes.”

At the time of this article’s publication, Lisa Coston Hall worked as a historical publications editor at the North Carolina Museum of History. She edited Tar Heel Junior Historian and other materials.