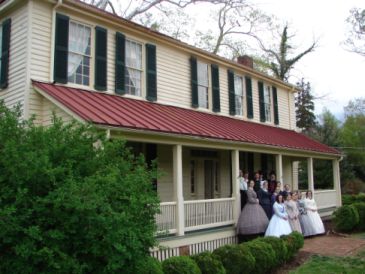 Robert Armistead Burwell, Presbyterian minister and educator, was born in Dinwiddie County, Va., the eldest son of Colonel Armistead Burwell (1777–1841) and Mary Cole Turnbull; he traced his descent from Major Lewis Burwell I (1621–53) of Carter's Creek, Gloucester County, Va., who had come to Virginia in 1640. Burwell was graduated from Hampden-Sydney College, Farmville, Va., in 1823 and in the same year entered Union Theological Seminary, Richmond, Va., as one of the three members of its first class. On 23 Oct. 1826 he was licensed to preach by West Hanover Presbytery at Lynchburg, Va. He served as home missionary in Franklin County, Va., 1827–28, and as stated supply to Salem Church, Lexington Presbytery, 1829–30. On 27 Nov. 1830 he was ordained by West Hanover Presbytery at Peak's Church. He served as home missionary in Bedford County, Va., 1830–31, and as pastor of Wood's Church in Chesterfield County, Va., a few miles from Petersburg, 1831–35.

On 22 Dec. 1831, Burwell married Margaret Anna Robertson (3 Oct. 1810–21 June 1871), founder and coprincipal of Mr. and Mrs. Burwell's Female School in Hillsborough (1837–57). Born in Richmond, Va., she was the daughter of Scots merchant William Bruce Robertson of Petersburg and Margaret Ann Spotswood (1792–1869) and in direct descent the great-great-granddaughter of Virginia's colonial governor Alexander Spotswood (1676–1740) and Ann Butler Brayne of London. Margaret Anna Robertson was reared in Petersburg by her mother's remarkable sister, Mrs. Susan Catharine Spotswood Bott ("Aunt Bott"), whose life of Presbyterian good works was sketched by her pastor, Dr. A. B. Van Zandt, in The Elect Lady (Philadelphia, 1857). The Presbyterian education and discipline received in the Bott home were later to provide Margaret Anna with the exact pattern and basic groundwork for the famed Burwell School. 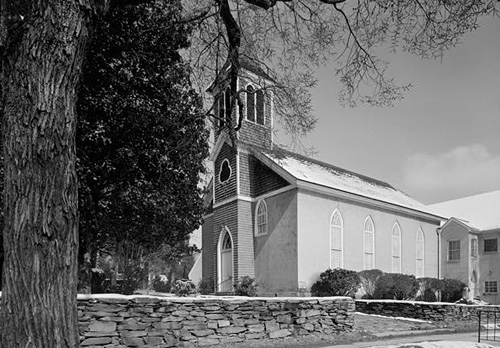 In the late autumn of 1835 the young Burwells, with two small children, arrived in Hillsborough. Ten other children were to be born to them during their Hillsborough years. Robert Burwell assumed the pastorate of the Hillsborough Presbyterian Church, lately vacated by the Reverend John Knox Witherspoon. The Burwell family settled into the recently purchased Presbyterian manse on North Churton Street; the house was to become widely known as the Burwell School and is now a National Register house, owned and restored by the Historic Hillsborough Commission.

During the Reverend Mr. Burwell's pastorate, the Presbyterian Church built a new Sessions House, razed after a hundred years, and the brick church structure itself was renovated extensively. Burwell also was a moving force in the establishment of a new Hillsborough Literary Society, which flourished vigorously for a time.

To augment her husband's uncertain four hundred dollar per year salary, Mrs. Burwell in 1837, at Dr. James Webb's suggestion, began to teach some of the neighborhood children at a day school in her own home. Tradition says that Webb's daughter, Mary, was her first pupil and that Mary's companions were Annabelle Norwood and Sarah J. Kollock. The little day school quickly developed into a boarding school offering both a solid grammar school curriculum and the equivalent of high school courses, in two sessions per year. Girls from eight to eighteen years of age came from distant North Carolina and Virginia plantations and towns as well as from neighboring states.

French, Latin, Spanish, and Italian were taught by imported language masters, an innovation in female education in the Carolina back country of the 1830s. The same masters taught most of the "ornamentals," that is, piano, guitar, voice, painting, and drawing. Signor Antonio di Martino, a courtly Sicilian cavalry officer, was the most notable of the Burwells' imported "professors" and lived in Hillsborough for many years. Mrs. Burwell herself, besides overseeing every detail of the operation of the house, kitchen, and garden, taught "divisions" (classes) in English grammar, utilizing her favorite Paradise Lost, and took charge of Sunday afternoon studies in the Shorter Catechism.

Girls were expected to show and to prove definite progress in all areas, and this program of compulsory, orderly self-improvement was one of the best features of the school. Special emphasis was placed on improvement in handwriting, English composition, social manners, and dress. End of the year public oral and written examinations in all subjects, as well as musical concerts and exhibitions of art, needlework, and copybooks, were annually anticipated contributions to the culture of the entire area. The motto of the school was widely advertised: "Not how much but how well."

In 1848 the Burwells embarked on a considerable program of expansion. The Reverend Mr. Burwell on 30 Mar. resigned the pastorate of the Presbyterian church to become the active coprincipal of the school; he purchased outright the manse and its two acres of grounds and contracted with Captain John Berry at a cost of over twenty-five hundred dollars to renovate and enlarge the house. At about this time, also, the Burwells published their only Catalogue, a slender booklet printed by Dennis Heartt and now extremely rare.

Although the Catalogue describes a modest establishment, the Burwell School exerted a far-reaching influence out of all proportion to its size. Schools stemming from it either directly or indirectly included the Nash and Kollock School in Hillsborough; Susan Webb's Almeda School at Oaks (in which her famous brothers "Sawney" and John Webb were taught); Miss Emma Scales's Reidsville Female Seminary; the Mitchell sisters' Simonton Female College, later Mitchell College, and still later Statesville Female College at Statesville; the Charlotte Female Institute, later Queens College; and Peace Institute, later Peace College, Raleigh.

In 1857 the Burwells closed the Hillsborough School and removed to Charlotte. There the Reverend Mr. Burwell had been offered the principalship of the Charlotte Female Institute, which had just completed a new building. He also served as pastor of the Paw Creek Church in Mecklenburg Presbytery from 1859 to 1863. Apparently the Burwells operated the institute in Charlotte in much the same way as the Hillsborough school. In 1859 they offered their eldest son, John Bott, a partnership in the operation of the institute, which he accepted. An 1859 circular of the institute is signed, "Rev. R. Burwell & Son." During the Civil War, in which five of the Burwells' eight sons served, Mrs. Burwell cared for refugees in the institute building.

After a perceptible decline in health, Mrs. Burwell died on 21 June 1871 in Raleigh, at the home of her daughter Nannie (Mrs. W. H. Crow). She was buried in Elmwood Cemetery, Charlotte. A legend in her own lifetime, Mrs. Burwell was widely hailed as a superior administrator, teacher, wife, mother, gardener, and conversationalist. Tall and imposing in appearance, highly gregarious, and endowed with great energy, she embodied many of the characteristics of the colonial Spotswood family.

After Mrs. Burwell's death, Robert A. and John Bott Burwell assumed in 1872 the joint principalship of Peace Institute in Raleigh. Although the Reverend Mr. Burwell actually retired from active teaching in 1875, he continued to serve the institute in various ways until 1892. In later years he also served as pastor of the church at Oakland in Johnston County. In 1882 he received a D.D. degree from The University of North Carolina. He died in Raleigh and was buried in Elmwood Cemetery, Charlotte. John Bott Burwell continued as principal of Peace until 1890.

Portraits of the Reverend Robert A. Burwell and of John Bott Burwell hang at Peace College. A portrait of Mrs. M. A. Burwell hangs at Queens College.

Burwell has also become known for his brutal, abusive and inhumane treatment of Elizabeth Keckly (Keckley), a slave in his household. Elizabeth Keckly would later purchase her freedom and find her way to Washington, D.C. where she became a well-known dressmaker Hillsborough schoolmaster William Bingham. She also recorded assualt by another local Hillsborough resident. This individual has been presumed to be Alexander Kirkland.

Catalogue of the Burwell School (n.d.).

Drawing of the Burwell School (possession of the estate of Mrs. Mattie Burwell Murphy, Davidson).

Hillsborough Presbyterian Church. Courtesy of Library of Congress. Available from http://www.loc.gov/pictures/item/nc0061.photos.102584p/resource/ (accessed May 16, 2013).

Mr. Burwell was also a direct

MRS. Burwell was the

MRS. Burwell was the decendant of Virginia Royal Governor Spotswood.

What? No mention of how

What? No mention of how Robert Burwell at the request of his wife Margaret beat her viciously because she did not carry herself as a subservient slave. No mention of how his good Alexander M. Kirkland raped and impregnated Keckley, who would go on to become famous and wrote of her experience.

Thank you for sharing your reactions to this entry with us. We have updated the Armistad Burwell and William Bingham entries to include their relationship to Elizabeth Keckly and the brutal, abusive and inhumane treatment she received from them.  We have also added a new entry on Elizabeth Keckly.

Thank you for sharing your comments with us.

Please clarify and expound on

Please clarify and expound on the addendum at the end of this article regarding Keckly.