"For What Is a Mother Responsible?"

This editorial, entitled “For What is a Mother Responsible?” appeared in the Carolina Watchman, a newspaper based in Salisbury, North Carolina, in 1845. The writer describes an ideal mother, but he also gives us a sense of how children were raised in the early nineteenth century. Since most children did not go to school — and certainly not all day, five days a week, for nine months a year — parents were directly responsible for far more of their children’s education than they are today.

On the surface, the editorial explains what a mother should do in order to successfully raise her child. But a deeper examination of the editorial reveals a great deal more about the time and place in which the piece was written, as well as the editorial’s author (or authors).

A mother is usually also a wife, and has the management of a family and a direct influence over subordination to her head, has the seat of authority and wields the sceptre of government. From a position of entire dependence, she has risen to power and rank, and though her throne may be in a cottage, and her dominion the little work of household affairsThe author describes women's sphere of influence as limited to the "little work of household affairs," and that description probably would have rung true for most North Carolinians in the 1840s, particularly white North Carolinians who were not impoverished. Few white women from families with reasonably comfortable incomes worked outside the home in this period in the American South. Modern readers, however, would be far more familiar with two-income families in which both male and female parents work, either full-time or part-time, in paid jobs outside the home. The role of the father is conspicuously absent in this article and the author holds women exclusively responsible for the physical health, habits, behavior, moral principles, education, and religious upbringing of their children. In contrast, recent research has shown that today's fathers are very active in the lives of their children -- more so than their own fathers -- and parents work more cooperatively today than in the past to make decisions about parenting and to spend time with their children. Readers from the 1840s would likely be astonished to hear about some modern families in which women hold powerful positions in major corporations while their husbands stay home to take care of the couple's children! The idea of daycare, particularly for middle-class and upper-class families, would have been unheard-of in the 1840s, and public education was not yet firmly established in the southern states, so ideas about the daily care and education of children have changed quite a lot over the past 160 years. This article describes the mother as responsible for almost every aspect of a child's life, which assumes that the mother is with the child almost all of the time. (In the case of families with servants, it is assumed that she is directly supervising those who are providing child care services and is in the home should any problems or concerns arise.) The idea of mothers and children being completely separated for hours each day would have been foreign to the target audience of this article., yet is she not the less really responsible, than is that youthful queenQueen Victoria of England who now sways a sceptre over the four quarters of the earth. But for what is she responsible?

She is responsible for the nursing and rearing of her progeny; for their physical constitution and growth; their exercise and proper sustenance in early life. A child left to grow up deformed, bloated, or meagre, is an object of maternal negligence.

She is responsible for a child's habits; including cleanliness, order, conversation, eating, sleeping, manners, and general propriety of behavior. A child deficient or untaught in these particulars, will prove a living monument of parental disregard; because generally speaking, a mother can, if she will, greatly control children in these matters.

She is responsible for their deportment. She can make them fearful and cringing, she can make them modest or impertinent, ingenious or deceitful; mean or manly; clownish or polite. The germ of all these things is in childhood, and a mother can repress or bring them forth.

She is responsible for the principles which her children entertain in early life. For her it is to say whether those who go forth, from her fireside, shall be imbued with sentiments of virtue, truth, honor, honesty, temperance, industry, benevolence, and morality, or those of a contrary character -- vice, fraud, drunkenness, idleness, covetousness. These last will be found to the most natural growth; but on her is devolved the daily, hourly task of weeding her little garden -- of eradicating these odious productions, and planting the human with the lily, the rose, and the amaranth, that fadeless flower, emblem of truth.

She is to a very considerable extent responsible for the temper and disposition of her children. Constitutionally they may be violent, irritable, or revengeful; but for regulation or correction of these passions a mother is responsible.

She is responsible for the intellectual acquirement of her children, that is, she is bound to do what she can for this object. Schools, academies, and colleges open their portals throughout our land; and every mother is under heavy responsibilities to see that her sons and daughters have all benefits which these afford and which circumstances permit them to enjoy.

She is responsible for their religious education. The beginning of all wisdom is the fear of God; and this every mother must teach. Reverence for God, acquaintance with His word, respect for the duties of ordinance of religion are within the ability of every parent to implant, and if children grow up ignorant or regardless of the Bible and the Saviour, what mother, when she considers the wickedness of the human heart, can expect them to rise up and call her blessed? 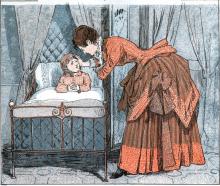