"We have unexpectedly become civilized"

In 1829, the citizens of Turkey Town published this letter in the Cherokee Phoenix and Indians’ Advocate, a tribal newspaper, opposing relocation. They pointed out the irony that even after becoming “civilized” as white people had claimed to want, they were nevertheless being pushed off their land.

Since the 1790s, the federal government had followed the policy of trying to “civilize” the Cherokee. A series of treaties between the Cherokee and George Washington’s administration provided that the federal government would provide the Cherokees with livestock, farming tools, and instructions in their use, so that “the Cherokee nation may be led to a greater degree of civilization, and to become herdsmen and cultivators, instead of remaining in a state of hunters.” (quoted 111)

In fact, the Cherokee lived in permanent villages, and they had long practiced a fairly advanced form of agriculture, based around the “three sisters” — corn, beans, and squash. But Cherokee agriculture was designed for simplicity and ease of management. It required less labor than European agriculture, with its livestock, fencing, plowing, cultivating and weeding, and it didn’t produce a surplus. More important, traditional Cherokee agriculture was the work of women. Men hunted, often traveling great distances on winter hunts, while women raised crops. Whites saw Indian men as lazy, and those who wanted to “civilize” Indians particuarly wanted the men to work continually. They wanted, in the words of historian Theda Perdue, to “turn men into industrious, republican farmers and women into chaste, orderly housewives.” (109)

The Cherokee accepted white attempts to “civilize” them because they saw it as their best chance to survive as a people in the new United States. They had lost most of their traditional hunting grounds, and an agricultural surplus would give them something to trade with whites. Many Cherokee learned to speak English and to read and write; they converted to Christianity; and they established a government with written laws, courts, and police. Not all Cherokee embraced “civilization,” but those who did gained the most power economically and politically in Cherokee society. By 1830, some Cherokee farmers even owned slaves, just like their white counterparts.

TO THE CHEROKEE PEOPLE....

Our ancestors settled in this place at a period not now in our recollection. Here was subsistencesacred ground, and on this spot the Council-fire blazed with luster, and here were the dwellings and seats of Kings and our beloved Chief! -- We speak of days when we lived in the hunter's state, and when our feet were swift in the track of gamewild animals hunted for food..

General Washington, after having smoked the pipe of peace with our Chiefs, sent us word to discontinue the pursuit of vagrant habitsEuropeans and European-Americans often thought of Indians as "vagrants" without settled homes, wandering from place to place after game to hunt. But the Cherokee actually lived in permanent villages -- although the winter hunt might take men far from home, the village stayed put. When the authors talk about "vagrant habits," they are referring to those long winter hunts. and adopt those more substantial and become cultivators of the soil. His successors pursued, in regard to us, the same policy, and sent to us the same Talk from time to time -- that as game was precarious and liable to destruction, the bosom of the earth afforded means of subsistence, both infinite and inexhaustible. But time was not allowed us to experience the blessing of putting this recommendation to practice by interested wicked white men, who lived near to us, and who esteemed us a nuisance, because the Great Spirit had placed our habitations in a desirable County, and because they themselves had crossed the Big Water (the Ocean) and had become our neighbors. The bitter cup of adversity was filled to us on every side, by our enemies. Our safety was often endangered by intrigue and misrepresentation of our character to the General Government; and it was not mental or natural disabilityMany white people, including some scientists, believed that Indians were not as intelligent as white people. They concluded that differences in culture were a sign of Indian peoples' inferior intelligence. that opposed itself to our advancement in civilization, but obstacles place[d] in our way to reach it.

The Indians were represented as incapable of learning the arts of civilized life, and at the same time treated in in most uncivil manner. They were savagely revengeful, because they had the spirit to resent the murder of their friends & relations. They were rogues and thieves, because, not knowing the method of legal processes to obtain justice, and if they did, their oath decreed to non-availing, they retaliated in the same way. They were drunkards, because intoxicating liquors were introduced among them. They were disinclined to the study of books, because of some few superficially educated under bad instruction had betrayed their countrymen and had set bad examples. They were stubborn, because they loved the land that had been endeared to them as an inheritance of their fathers. This flood of inconsistencyWhite people had used all of these negative stereotypes to justify taking land from the Indians. raged with violence over the heads of our Chiefs & swept with its waves, from under their feet, the earth, for which they had struggled for ages past. In this way our territory diminished, and our inheritance was circumscribed to its present bounds.

Our Chief displaced wonderful forbearance in this trials, and maintained the faith of treaties, with the United States, whose chief magistrateThat is, the President. The authors use the more general term "chief magistrate" because Indians negotiated treaties with Americans when they were part of the British Empire, and with the federal and state governments after Americans won independence. also exercised the spirit of paternal affection, and adhered to his engagements as pledged to us by treaties. With caution have we passed the strong shoals of opposition, and its mingled cruelties to the light of civilization. The sun has arise[n] in our moral horizon is fast advancing to its meridian. We hail it with joy! Although a part of our nation have detached themselves from us, to follow the chase, in the western wilds, and we are invited to retrograde to savageism, with strong talks and inducements as bribes our appetite for our present enjoyments if is too strong to relinquish them because we have tasted their sweets and are contentedAlthough some Cherokee had moved out west to continue living a traditional way of life, the authors enjoyed their new culture and way of living and were not interested in moving out west and becoming hunters again..

We have noticed the ancient ground of complaint founded on the ignorance of our ancestors and their fondness of the chase, and for the purposes of agriculture as having in possession too much land for their numbers. What is the language of objection at this time? The case is reversed, and we are now assaulted with menaces of expulsion because we have unexpectedly become civilized and because we have formed and organized a constitutional government. It is too much for us now to be honest and virtuous and industrious because then are we capable of aspiring to the calls of Christians and PoliticiansChristian missionaries and American government officials had long called upon the Cherokee to adopt American culture and Christainity. By accepting this challenge, the Cherokee had proven wrong all of the stereotypes used by white Americans to take away Indians' land. which renders our attachment to the soil more strong and therefore more difficult to defend us of the possession. Disappointment inflicts on the mind of the avaricious whiteman; the mortification of delay, or the probability of the intended victim's escapeBy adopting the culture and beliefs of white Americans, the Cherokee are thwarting the efforts of greedy white people who only want to take away their land. Now that Cherokee have "civilized," white people are worried that they will no longer be able to destroy the Cherokee as easily as they had planned. from the snares laid for its destruction. It remains for us in this situation of the question, to act as free agentsThe Cherokee freely chose to accept Christainity and to adopt a settled form of agriculture. in choosing for ourselves to walk in the straight forward path of the impartial recommendations of Washington, Jefferson, Madison, and Monroe, as most congenial to our feelings and knowledge of the means calculated to promote our happiness. We hereby individually set our faces to the rising sun and turn our backs to its setting. As our ancestors revered the sepulchral monuments of the noble dead, we cherish the sacred of their repose as they lie under hillocks of clay, that cover them from our sight.

If the country, to which we are directed to go is desirable and well watered, why is it so long a wilderness and a wasteland and uninhabited by respectable white peopleThe Cherokee call the American government's bluff: If the land the Cherokee have been given out west is so lush and fertile, why aren't white people already living there? whose enterprise ere this, would have attended them to monopolize it from the poor and unfortunate of their fellow citizens as they have hitherto done? From correct information we have formed a bad opinion of the western country beyond the Mississippi. But if report was favorable to the fertility of the soil, if the running streams were as transparent as crystal, and silver fish abounded in their element in profusion we should still adhere to the purposes of spending the remnant of our lives on the soil that gave us birth and rendered dear from the nourishment we receive from its bosom.... 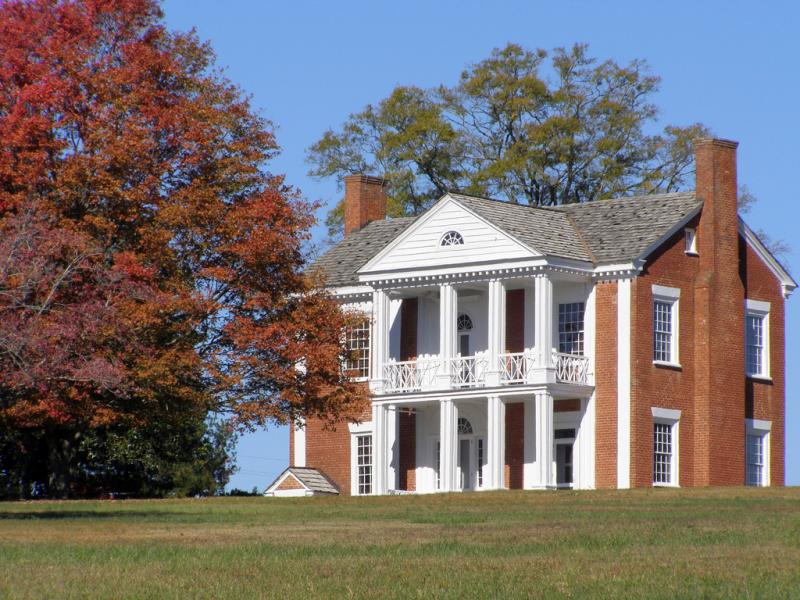 James Vann, the Cherokee leader who built this house in Spring Place, Georgia, owned some 200 slaves and hundreds of acres of farmland.