The Tuscarora Ask Pennsylvania for Aid

By the early 1700s, the Albemarle Settlement had expanded well beyond its original boundaries. Tensions between settlers and the Tuscarora had been rising: settlers were claiming exclusive ownership of lands Tuscarora had hunted on for years, native peoples were being enslaved, and trade between settlers and the tribe were not always mutually adventageous. In 1710, the town of New Bern was settled along the Neuse and Trent Rivers. Attempting to avoid further conflict, the Tuscarora sought refuge in Pennsylvania to escape the harrassment and enslavement by the southern settlers. Their request for asylum in Pennsylvania was ultimately refused. Below is a transcription of a report of commissioners from the Pennsylvania provincial government who met with representatives of North Carolina's Tuscarora in 1710.

Iwaagenst Terrutawanaren, & Teonnottein, Chiefs of the Tuscaroroes, Civility, the Seneques The Seneca, one of the Five Nations of the Iroquois. (The others were the Mohawk, the Oneida, the Onondaga, and the Cayuga.) Kings, & four Chief more of yt naconThat nation. People in the eighteenth century used a great many abbreviations in their writing, perhaps in part because they wrote with quill pens -- turkey feathers sharpened to a point -- and ink made by hand from materials such as walnut husks. The writer had to stop every few words to dip his quill in the ink, making writing considerably more time-consuming than it is today! Often the letter "y" was used to substitute for "th," and vowels might be dropped altogether or moved to a superscript (for example, ye for "the"). In "nacon," the "c" may also be an abbreviation for the "ti" -- or it may simply be a different spelling of "nation." In the eighteenth century, the idea of standard spellings for words hadn't taken hold, and people spelled (and capitalized) words as they saw fit. All of this can make reading colonial-era documents a little confusing until you get a feel for them. If a word looks unfamiliar, try reading the passage out loud -- often it will sound right even if it doesn't look right., wth. Opessa ye ShawanoisThe Shawnee, an Algonquian people who lived in south central and southwest Pennsylvania as well as western Maryland and Virginia and present-day Ohio and Kentucky. King.

The Indians were told that acording to their Request we were come from the Govr. & Govmt., to hear what proposals they had to make anent a peace, according to the purport of their EmbassyToday an embassy is the home and offices of an ambassador from one country to another -- a very formal structure. Historically, an embassy was a delegation or a mission sent from one ruler to another. Here, then, the Tuscarora who went to Pennsylvania on behalf of their people were an embassy. from their own People.

They signified to us by a Belt of Wampum Wampum is a string of white beads made from the shell of the North Atlantic channeled whelk, traditionally used by American Indians of eastern North America. Belts made of wampum were given or exchanged in many different ceremonies, from marriage to treaties between peoples. Wampum could also be used for storytelling or to spell out the terms of an agreement, by using different colored beads as memory aids., which was sent from their old WomanProbably this is supposed to be "old women," plural. Each of the first six belts is from a different group of the Tuscarora people. Note that old women come first, and then children (including those not yet born). Why do you think the Tuscarora gave these belts first, instead of starting with the kings and chiefs?, that those Implored their friendship of the Christians & Indians of this Govmt., that without danger or trouble they might fetch wood & Water.

The second Belt was sent from their children born, & those yet in the womb, Requesting that Room to sport & Play without danger of Slavery, might be allowed them.

The third Belt was sent from their young men fitt to Hunt, that privilege to leave their Towns, & seek Provision for their aged, might be granted to them without fear of Death or Slavery.

The fourth was sent from the men of age, Requesting that the Wood, by a happy peace, might be as safe for them as their forts.

The fifth was sent from the whole nation, requesting peace, that thereby they might have Liberty to visit their Neighbours.

The sixth was sent from their Kings & Chiefs, Desiring a lasting peace with the Christians and Indians of this Govmt., that thereby they might be secured against those fearful apprehensions they have these several years felt.

The seventh was sent in order to intreat a Cessation from murdering & taking them, that by the allowance thereof, they may not be affraid of a mouse, or any other thing that Ruffles the Leaves.

The Eight was sent to declare, that as being hitherto Strangers to this Place, they now Came as People blind, no path nor Communicacon being betwixt us & them; but now they hope we will take them by the hand & lead them, & then they will lift up their heads in the woods without danger or fear.

These Belts (they say) are only sent as an Introduction, & in order to break off hostilities till next SpringAt this point, the Tuscarora had not begun to fight back or engage in "hostilities" against the white colonists, but this phrase might imply that they are ready to do so, if necessary., for then their Kings will Come & sue for the peace they so much Desire.

We acquainted Told them -- acquainted them or made them familiar with the knowledge. them that as most of this Continent were the subjects of the Crown of Great Britain, tho' divided into several Govmts.; So it is expected their Intentions are not only peaceable towards us, but also to all the subjects of the Crown; & that if they intend to settle & live amicably here, they need not Doubt the protection of this Govmt. in such things as were honest & good, but that to Confirm the sincerity of their past Carriage "Carriage" here means the way a person carries himself or behaves. towards the English, & to raise in us a good opinion of them, it would be very necessary to procure a Certificate from the Govmt. they leave, to this, of their Good behaviour, & then they might be assured of a favourable reception.

The Seneques return their hearty thanks to the Govmt. for their Trouble in sending to them, And acquainted us that by advice of a Council amongst them it was Determined to send these belts, brought by the Tuscaroroes, to the five nationsAlthough the Tuscarora seem to have intended the belts for the Pennsylvania officials, they sent them with the Seneca delegates to the Five Nations instead. Perhaps they thought their mission had failed, or they realized that they would not be able to obtain a certificate from the government of North Carolina. They may also have been offended that Ffrench and Worley did not accept the belts as a guarantee of the Tuscarora's good faith. In any case, it seems that they thought it best to start making friends with the northern Iroquois, at least as a backup plan. It turned out to be a good move, because after the Tuscarora War in North Carolina, the Iroquois were moved by the belts and the message to invite the remaining Tuscarora to move north and become the Sixth Nation..

May it please your honr.

Pursuant to your honrs. & Council's Orders, we went to Conestogo, where the forewritten Contents were by the Chiefs of the Tuscaroroes to us Deliver'd; the sincerity of their Intentions we Cannot anywise Doubt, since they are of the same race & Language with our Seneques, who have always proved trusty, & have also for these many years been neighbors to a Govmt. Jealous of Indians, And yet not Displeased with themThe provincial government of Pennsylvania was one of the friendliest towards American Indians, which is why the Tuscarora came to Pennsylvania instead of to another colony. William Penn, the proprietor, was a devout Quaker and a pacifist, and in addition to establishing religious freedom, he worked to make sure that Indians were treated fairly. He paid Indians fairly for their land, learned several native languages, and guaranteed fair trials for native peoples. After Penn's death in 1718, the colony's leaders were not always as fair to the Indians as he had been, but colonists and Indians lived peacefully in Pennsylvania longer than in other English colonies.; wishing your honr. all happiness, we remain,

Your honrs. Most humble & Obliged servants,

The State of Pennsylvania. Minutes of the Provincial Council of Pennsylvania, From the Organization to the Termination of the Proprietary Government. Volume II. Philadelphia, Pa. : Jo. Severns & Company, 1852. 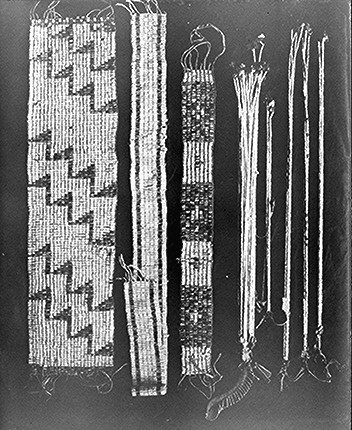 Several eastern North America tribes used wampum belts to represent important events -- such as treaties -- through the weaving of differently colored beads made of shell.