This is a resolution passed by the student government of the University of North Carolina in 1966. The students were responding to the “Speaker Ban,” which they believed was an assault on academic freedom and free speech.

Whereas: The University must serve as an open forum for different views and opinions, no matter how unpopular or divergent, and

Whereas: The University must guarantee to all members of the academic community the right to hear all sides of the issues, and

Whereas: It is only through the critical examination of all alternatives that the accumulated knowledge of society can be advanced, and

Whereas: It has always been the policy of the North Carolina Forum as a Student Government executive agency to present all points of view on its programs; now, therefore,

Be it resolved by the student legislature of the University of North Carolina at Chapel Hill that:

We support the Carolina forum’s invitation to Doctor Aptheker to speak on our campus on March 9, 1966, on the basis of the principle of freedom of speech and academic freedom (with no intent whatsoever of sensationalism).

We believe it is educationally desirable for us to hear and scrutinize persons representing any and all ideologies and philosophies of government.

This body is opposed to Communism and other forms of government or philosophy which are alien to democracy.

Copies of this resolution shall be sent to the following:

Resolution in Support of Free Speech from Student Government. From the Records of the Office of Chancellor -- Paul Sharp Series (#40021), University Archives, Wilson Library, University of North Carolina at Chapel Hill. 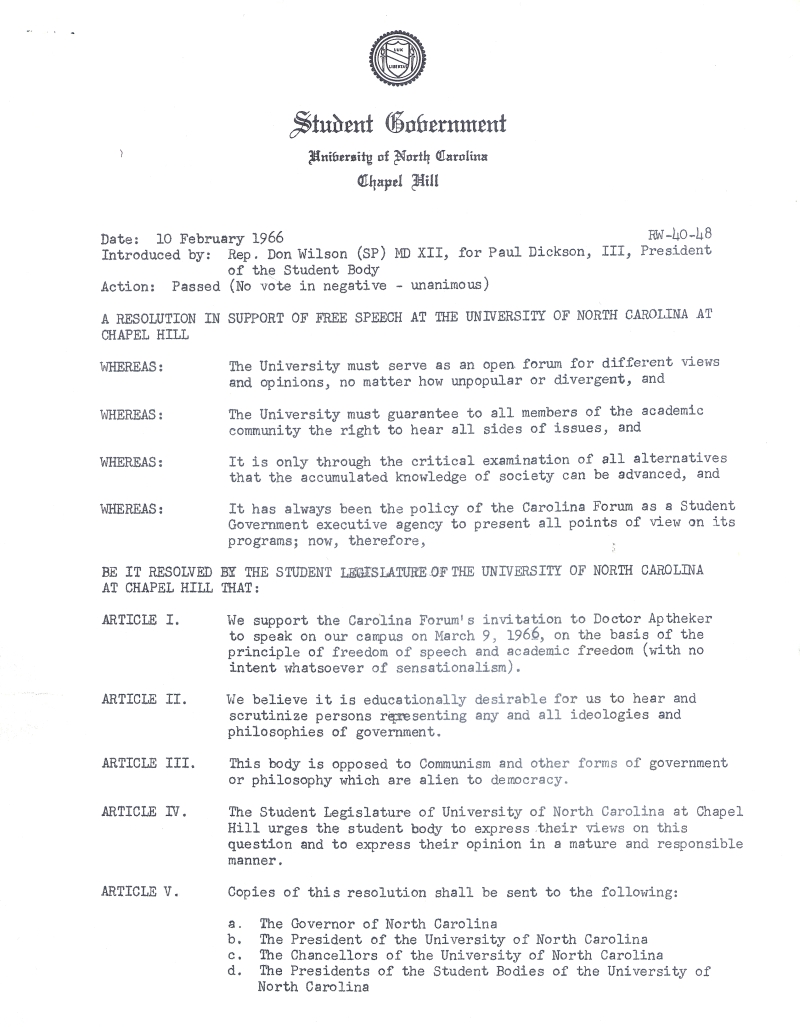 Page One of Resolution in Support of Free Speech