Southern Women and the Bicycle

Earlier in the nineteenth century, bicycles were quite dangerous machines. They had a large front wheel and the rider sat high above the ground. If the rider hit a rock or bump, he could be thrown from the vehicle and on to the ground.

With the invention of the rubber tire and the development of lighter metals, the bicycle became more practical. The large front tire was replaced and inventors created a design that was fast, stable, safe, and relatively inexpensive.

The bicycle was a radical invention because it gave the rider individual freedom to travel independently at a fast pace. Previously, people had been restricted to horseback or horse-drawn wagons, but the bicycle was much more practical and affordable, especially for people in urban areas.

Upper class and middle class men and women embraced the bicycle. The image of a woman riding a bike became a political symbol of the age: she was an independent woman traveling unaccompanied by a chaperone. To some, the idea of women riding bicycles was scandalous.

The article below appeared in The Charlotte Observer in June of 1895.

Southern Women and the Bicycle

The women of the Southern States have been much slower than their Northern sisters in the utilization of the bicycle. They are affected by the conservatism of the South, which looks askance at any novelty, and very many of them yet think that bicycling is highly improper for a woman. We have frequently noticed remarks to this effect in Southern papers, and we recently learned that women in several places there had been brought under discipline for bicycling.

The prodigious cycling boom of this year in New York has already told upon the South.

By this time there are lots of women bicyclers in Virginia and Georgia; there are a smaller number in Alabama and Louisiana; there are fewer yet in South Carolina; there are very few in Arkansas; we have not heard of any in Mississippi; the Northern women in Florida have introduced the wheel there.

We do not believe that the conservatism of Southern women can much longer resist the wheel; the Texas and North Carolina girls seem to be ready for it; we think it is bound to attract the fair sex even in the Bayou State.

It is not undignified for a woman to ride a bicycle. She does not lower herself by wheeling. To ride upon it at full speed does not cut into the pride of womanhood. That pride exists in the North not less than in the South.

The Sun speaks of Texas and North Carolina together because, as it said some weeks ago, it considers these the two most progressive and promising of the Southern States. We can say to it that the bicycle is no new thing to the women of North Carolina -- they have been riding it for four years or more, and its popularity is increasing among them.

If the venerable and accomplished editor of the Sun should come to Charlotte again, take another meal at Gresham's and stay over just one fine evening, he could see numbers of ladies spinning along over the beautiful streets of this city and over the macadamized roads leading out of it. Female bicyclists? Well, we should think! And not only bicycles, but we have been given notice, in the most confidential manner possible, that we may soon begin to look around for bloomers. North Carolina a progressive State? Yea, verily. Her women not only ready for bicycles, but riding them, and now ready for bloomers.

"Southern Women and the Bicycle." The Charlotte Observer, June 9, 1895.

Bicycles: Scourge of the Streets? 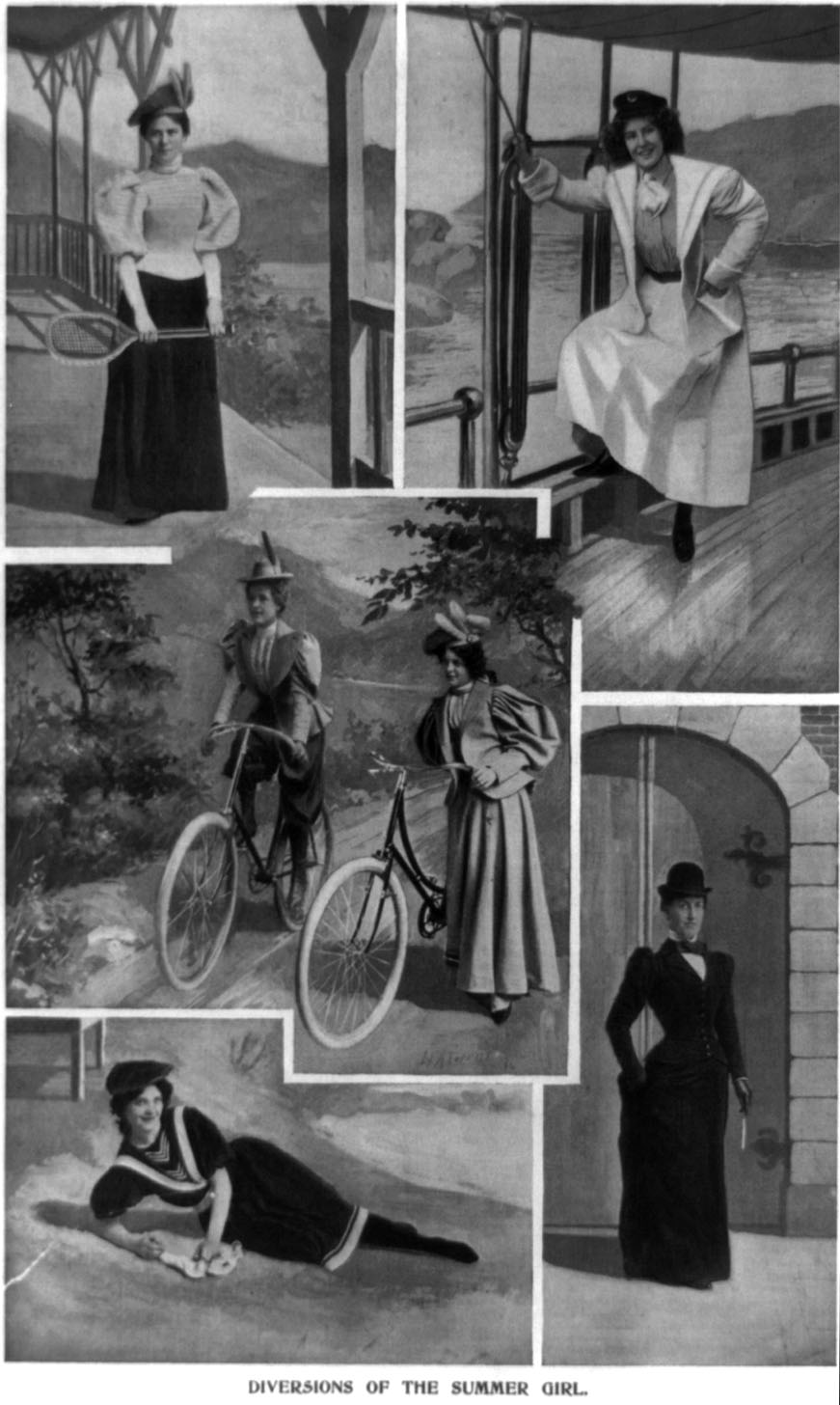 A magazine portrayed these "diversions of the summer girl in 1896, which included tennis, sailing, bicycling, and going to the beach. 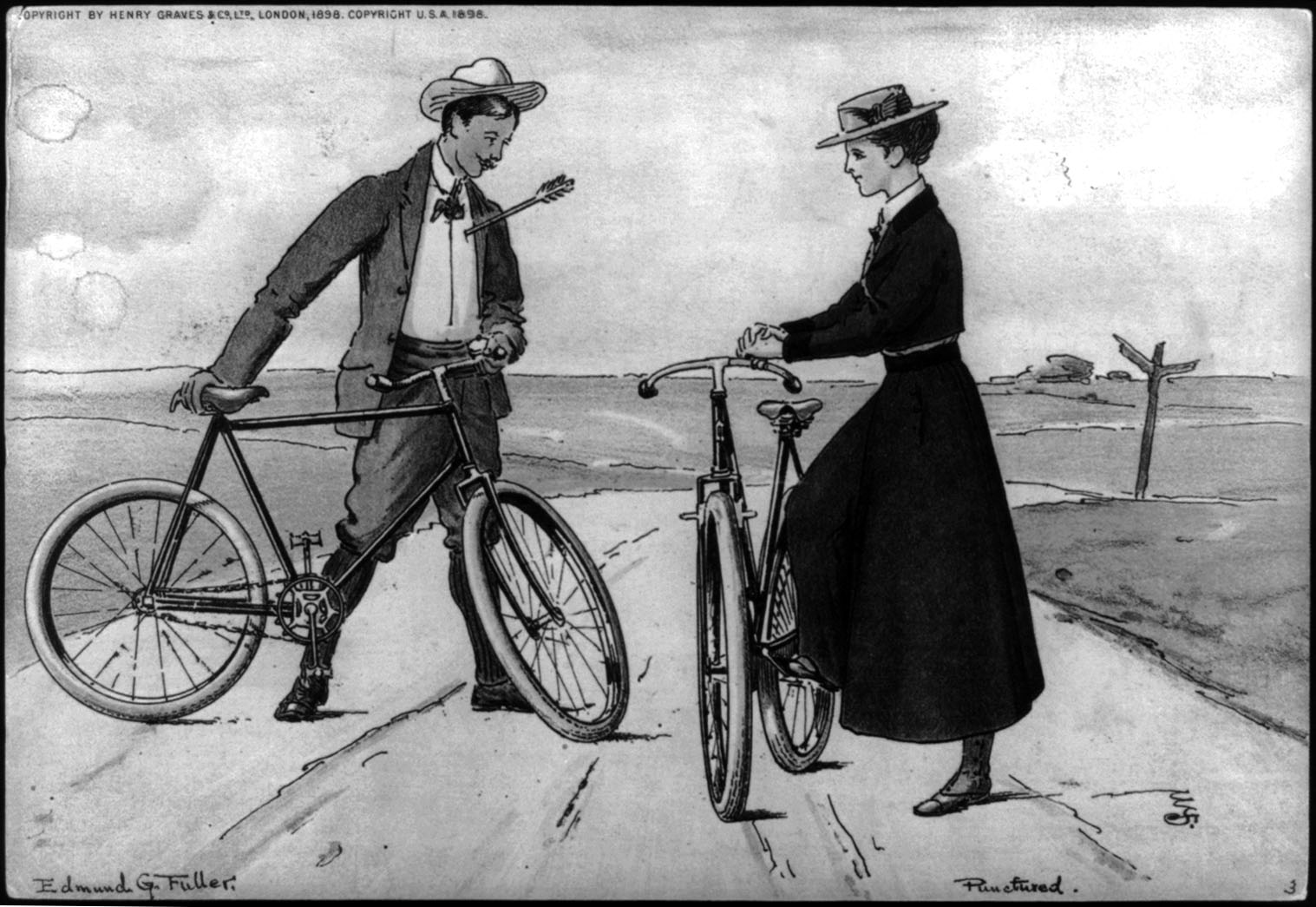 Bicycles gave women more freedom than they had traditionally had -- including, as this illustration shows, the freedom to conduct a courtship out of the watch of their parents. 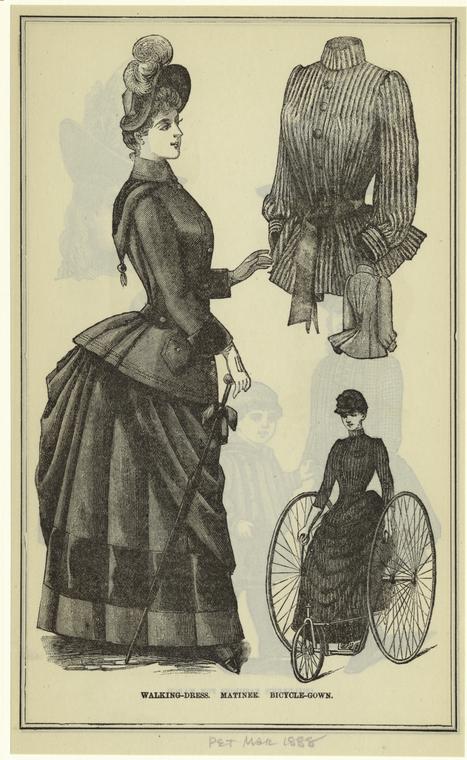 This print of a "walking dress" and "bicycle gown" show how restrictive fashion was to women's physical activity in 1888.