The Southern Cross was written by George Tucker and first published in March of 1861; it was sung to the tune of "The Star-Spangled Banner," but reflected the Confederate cause. The lyrics are below.

How peaceful and blest was America's soil,
'Till betrayed by the guile of the Puritan demonThe "Puritan demon" is abolitionism, which southerners saw as a dangerous, radical New England philosophy.,
Which lurks under virtue, and springs from its coil,
To fasten its fangs in the life blood of freemen,
Then boldly appeal, to each heart that can feel,
And crush the foul viperViper is a type of poisonous snake with large fangs. 'neath liberty's heel!
And the Cross of the South shall in triumph remain,
To light us to freedom and glory again.

'Tis the emblem of peace, 'tis the day star of hope,
Like the sacred LabarumLabarum was the flag used by the Roman Emperor Constantine, who ruled Rome form 272-337. The flag combined Christian and traditional Roman military symbols. that guided the Roman,
From the shore of the Gulf, to the Delaware's slopeThe Gulf of Mexico to the Delaware River. The Delaware river flows through the northern states of Delaware, New Jersey, Pennsylvania, and New York. Although the state of Delaware allowed slavery, its state legislature voted overwhelmingly against secession.,
'Tis the trust of the free, and the terror of foeman,
Fling its folds to the air, while we boldly declare,
The rights we demand, or the deeds that we dare!
While the Cross of the South shall in triumph remain,
To light us to freedom and glory again.

And if peace should be hopeless, and justice denied,
And war's bloody vulture should flap its black pinions,
Then gladly "to arms," while we hurl in our pride,
Defiance to tyrants, and death to their minions!
With our front in the field, swearing never to yield,
Or return like the SpartanDuring the third and fourth centuries BCE, Sparta, a Greek city-state, was one of the dominant military powers in the Mediterranean. Spartan warriors were fierce fighters and feared by others in the region., in death on our shield!
And the Cross of the South shall triumphantly wave,
As the flag of the free, or the pall of the brave! 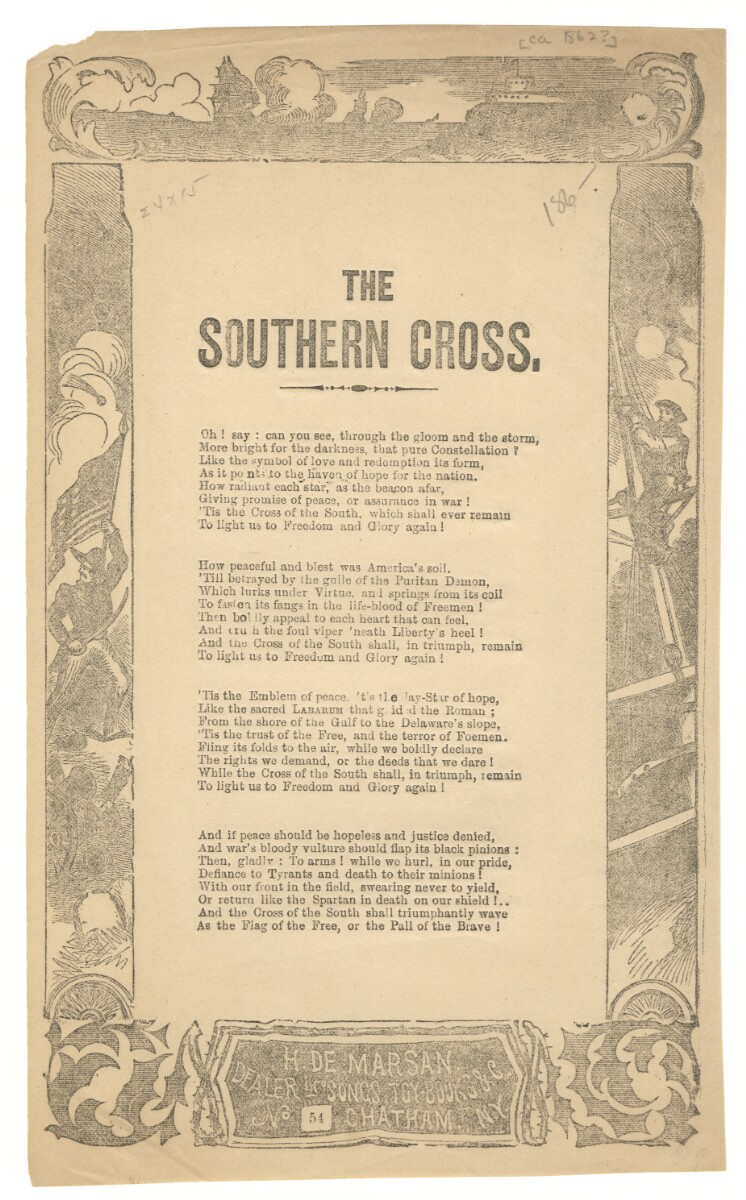