Serving in the Air Force

Wall
Well let’s see, I joined in December of ’41 and in December of ’42, which was a year later, I was on my way overseas.  After I trained, well then we went to Fort Wayne, Indiana and we really didn't know why we were going there.  They told us we’d pick up some B-26’sA B-26 was a medium sized bomber used by the Allies in World War II. here.  So we went down there.  We were then told to go to Florida.  I don’t remember the exact place because we only stayed there one night.
Interview
Were you with a crew of other…
Wall
Yes, I was with a crew at that time.
Interview
How many people constituted a crew? 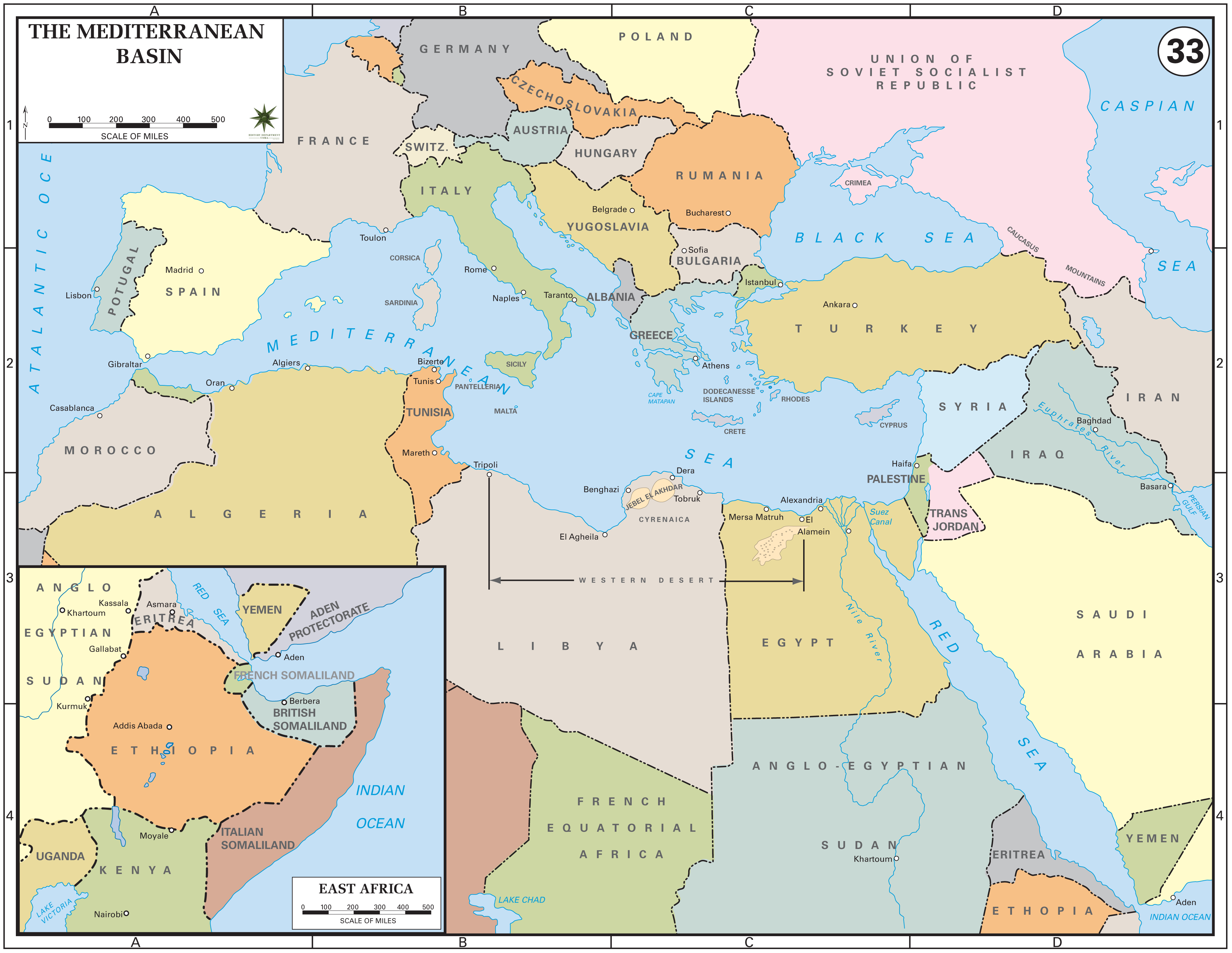 This map of the Mediterranean basin shows the places James Wall describes in his interview.

Well we flew in formations of threes.  V’s and if you were set in the back, then the fighters could get to you easier than if you were up in the middle because they had to go through all this fighting.  The Germans had these 88mm guns and they were in batteries of three.  If you were flying over SalernoSalerno is in Southern Italy., I could see a flash below me and a burst of flakArtillery designed to fire upwards from the ground at airplanes. above me.  Well I knew there were going to be two more.

If you saw one flash on the ground and a burst, then you saw another flash on the ground that burst, you knew there was going to be a third one.  So they had these 88mm guns and then if something happened to you, you got hit or something, then their fire would jump on you, you see.  That’s the way they had it set up there.

They had another method that they used.  When we went to Rome, they set up this big curtain flak that you had to fly through.  They weren’t shooting directly at you, but they would put up this big curtain and you had to fly through that curtain and if you were wounded or something, when you got through and you couldn't get back into formation, then the fighters were on you like a bunch of flies.

Another thing that happened, we went out on a mission up into Italy.  Coming back we ran into some problems, our crew did.  We had to crash land, well it wasn’t a crash landing, it was a pretty good landing on the Isle of MaltaMalta is an island in the Mediterranean ocean, south of Sicily. In World War II, Malta was a British colony..  Well we had to stay there quite a while before we could get off and get back.  When we got back and I got back to my tent…the ground crews were there then and they brought tents and we lived in tents.  Well there was a guy there and he had my clothes on.

I said, “Hey man, whatcha doing with my clothes on” and he said, “I didn't think you were coming back” (laughter).  But that was routine.  What they would do is if you didn't come back, they would send your personal clothes and things to home and they would divide out your clothes, GI issue you know.  Give me back my clothes, man (laughter).

Interview
What was Malta like by the way?
Wall
All I did was stay around the airplane there.  I didn't get, we weren’t sure we could get off.  When we landed, we had to dump everything off, some of the gas and guns, just to get off the island.  So they had a short runway and that’s about all I remember.  We were just there for a while, you know, we wanted to get back.
Interview
For the record, what kind of aircraft were you?
Wall
A B26 which is a medium bomb.
Interview
How many engine?
Wall
Two, two engines.
Interview
Fast?
Wall

They had a cruising speed of around 200 miles an hour.  They could go 300.  The first B26’s that came out had a high mortality rate because they were hard to fly.  People didn't understand them.  They had a lot of bugs in them.  Oh incidentally, the B26 that we picked up in Fort Wayne and took all the way to MoroccoMorocco is on the Atlantic and Mediterranean coasts of North Africa. It was a French colony at the time of World War II., the hydraulic system was corroded so we called it Old Corrosion.

So actually when we landed in Morocco with it, we cracked it up.  I remember getting bumped on the head and crawled up to the top, looked out the top and I saw one of my buddies running across the field (laughter).   Cause these things would blow up you know, if the fire started and got in the gasoline.  So I saw him running and I jumped out and started running.  That was in Old Corrosion.  Of course they gave us another one right away.

Interview
Did it burn?
Wall
No it didn't burn.  It was no more any good because the landing gear was gone.  Landing gear didn't come down.  See the hydraulic system controlled the landing gear.
Interview
So you came in on a belly landing?
Wall
Yeah, yeah, but we didn't know that it wasn’t going to hold.  We hit the runway with the wheels down, but the wheels folded up and then she just went.
Interview
Well that made your heart go pitty pat for a minute.
Wall
Yeah, well it happened so fast, you know, you didn't have time to get scared (laughter). 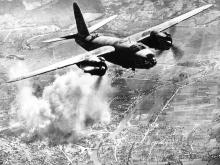