Seasons on a Farm

In the days before industrialized agriculture, many families depended on what they could grow themselves to feed themselves. Many farmers kept -- and many do today -- diaries documenting the weather, planting schedules, and outcomes of their efforts across the seasons and years. One such diary is that of James Evans, a resident of Cumberland County who farmed in antebellum North Carolina. Below are excerpts of his diary ranging from 1851 to 1859.

We had a hard frost on Friday March 21 1851 ice a plenty, in fact the SumpA sump is a hole or well built to collect water. Often the water that is collected in a sump is dirty and contains waste such as sewage. was froze hard we had to pour hot water in it to thaw it. Peach trees in full bloom. Friday night quite cloudy -- rained on Saturday & turned quite warm. We had a little frost on the 9 & 10 of Apr. 51 13 & 14 cool & cloudy -- on 15 we had considerable frost on the 22nd we had some frost, & on the 23rd we had a hoary frost "Hoary frost" is a moist frost that leaves a residue of ice., weather quite dry, consequently no serious injuryOften a frost will damage fruits and vegetables that have yet to be harvested. Evans notes that the weather was dry, and so "there was no injury" refers to the fact that his crops were not damaged by this hoary frost. Since this entry is from April, the frost would have affected young plants or -- most likely -- the buds on fruit trees. When the weather is warm early in spring, fruit trees can put out buds, which can be destroyed by a late frost. (This has happened in recent years in North Carolina.) -- Aug 15 peaches & apples very plenty.

I gathered 2 qtsQuarts Scuppernong grapesScuppernong grapes are native to central and western North Carolina and parts of Georgia. They are large white grapes and are often used for making wine. on Saturday the 23rd Aug 1851.

We planted Irish PotatoesIrish potatoes are white potatoes. Evans also grew sweet potatoes and thus needed to differentiate between the two in his diary. The term "Irish potatoes" was common in the nineteenth century -- even though potatoes are a crop native to America! -- because the Irish were known for surviving almost exclusively on potatoes. When Irish potato crops were hit by blight in the 1840s, famine resulted, and thousands of Irish emigrated to the United States. The term can still be heard in North Carolina today. on Good Friday the 25 of March 1853 -- June 15 complete failure, drought. We bedded slipsSweet potatoes are not planted from seeds but from slips, small pieces of potato that have sprouted. To make a slip, you place a piece of a mature sweet potato in water, leaving about half of the potato above the water line. To sprout, a potato also needs heat and sunlight. After a couple of days, the piece of potato will have grown green leaves on top and roots on the bottom. Next, the green leaves and roots are separated into smaller pieces and planted. on the 30 of March, sprouted very well. First lit out 24 June. No rain in May till 24 June. Commenced planting corn Apr. 1 & finished on the 30 Apr. We planted New ground 12 & 13 May. Corn up awful bad, it being decidedly the drought & the coldest spring I ever saw -- Planted peas June 15 finished July 6. ComAbbreviation for "commenced," which means began. hilling CornAs corn grows, it needs additional dirt around the base of the plant to provide nutrients and to anchor the plant so it will not fall over as it grows. Using a corn hoe, a farmer drags dirt from either side of the corn plant to make a hill around the plant, a process called hilling. July 1 finished July 20 1853 -- Corn getting fodderFodder is food for cattle. Cattle will eat corn cobs as well as the husks and stalks.. Aug. 22 Finished. Sept 22 First Frost -- Sept 20 quite considerable.

It is the general belief that this had been by far the coldest, most disagreeable & backward spring we ever had. Mulberries are very Scarce, & have just commenced ripening -- my best corn is about 8 inches high -- generally about 4 --. I am not done seeding corn -- The weather is very dry & the corn is missing badly -- No potatoes set out, though the sprouts look well -- I have no oats -- but other peoples are about a foot high -- The prospect generally, is decidedly bad. But oh! The flower Garden is filled with the choicest roses, & all nature is perfumed with thin fragrance. 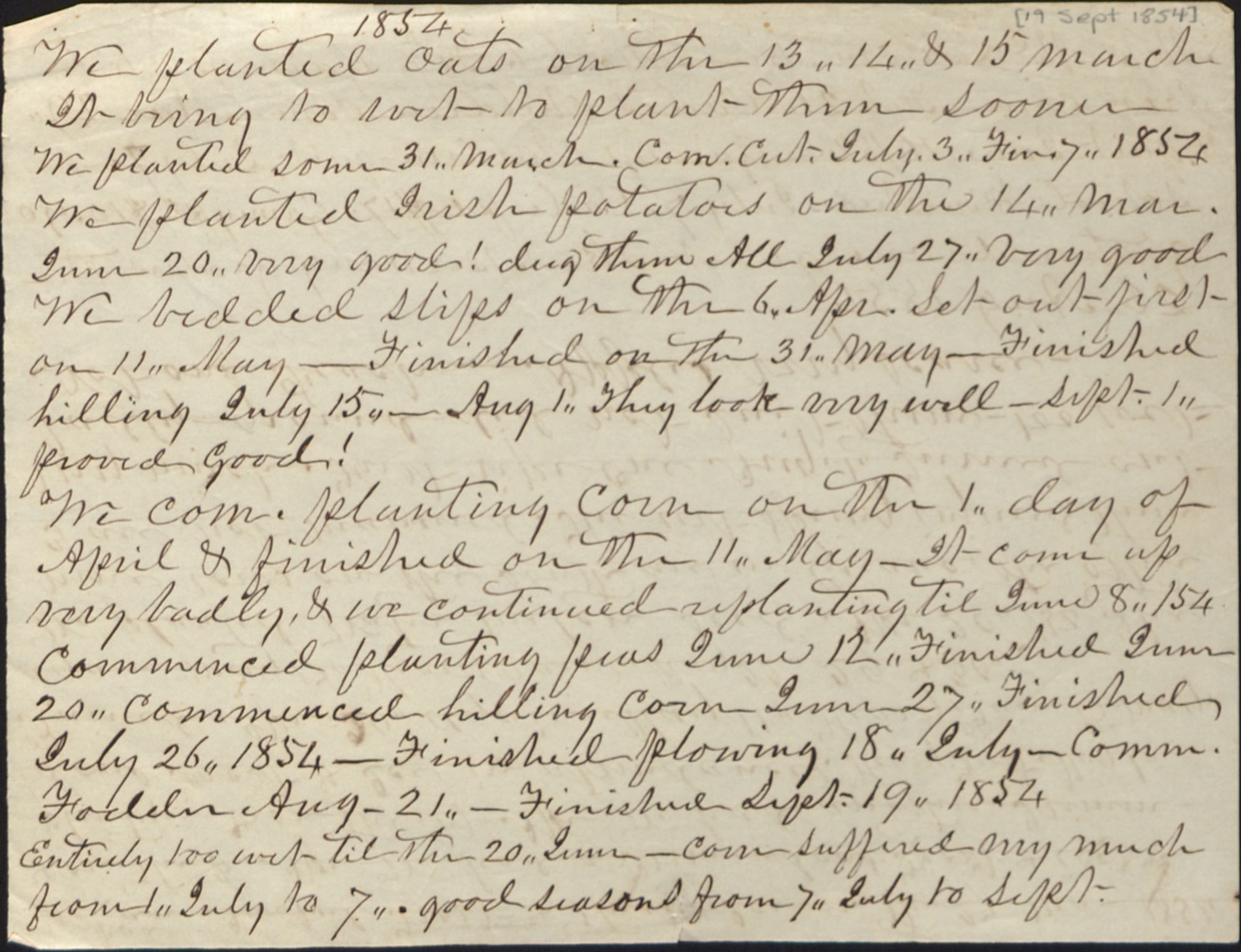 Pages from James Evans diary documenting the spring and summer of 1854.