Typhoid fever, dysentery, diarrhea, summer complaint, and certain other diseases have been proven to have their origin in human filth." data-share-imageurl=""> 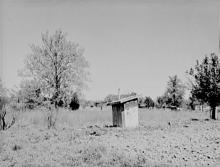