A Petition to Protect Loyalist Families

July 5,1782 letter to "His excellency Governor Martin and the Members of the Honorable Council," from the "Ladies of Wilmington."

This letter was written in response to an order made by the governor and his council. The order called for loyalist families to leave North Carolina within 48 hours of notification. The writers of the letter believed that this order was in response to and revenge for earlier mistreatment of Patriots during the 1781 occupation by British forces.

In early 1781, Major James Henry Craig had entered North Carolina and set up camp at Wilmington from where he wholeheartedly pursued and punished enemies of the British. Whereas moderate policies of Cornwallis had allowed Loyalists and Patriots to live side-by-side, Craig's policies were much more aggressive.

After the British were defeated at Yorktown in October, 1781, Craig received orders to leave Wilmington. He left behind the loyalist citizens (mostly women and children) of Wilmington. The order for the expulsion of these remaining loyalist families makes sense in the context of their previous position of privilege and freedom from cruel treatment under Craig's command and British occupation.

We, the subscribers, inhabitants of the town of Wilmington, warmly attached to the State of North Carolina, and strenuously devoted to our best wishes and endeavors to the achievements of its independence, feeling for the honor of, and desirous that our Enemies should not have the smallest pretext to brand them as cruel or precipitate, that the dignity of our public characters may not be degraded to the imitation of examples of inhumanity of our Enemies,

Humbly shew to His Excellency, the Governor, and the honorable the council, that we have been informed that orders have issued from your honorable board that the wives and children of Absentees should depart the State with a small part of their property in forty eight hours after notice given them.

It is not the province of our sex to reason deeply upon the policy of the order, but as it must affect the helpless and innocent, it wounds us with the most sincere distress and prompts our earnest supplication that the order may be arrestedhalted, and officers forbid to carry it into execution. If it is intended as retaliation for the expulsion of some of us the sub(scribers)The transcription of this text reads "subscribers?", making the translation uncertain. However, it is clear that the writers presume the order for the expulsion of the famlies of Loyalists was prompted by the Governor and his council's feelings of animosity against anyone associated with the British. by the British from the Town of Wilmington, and to gratify a resentment which such inhumanly to us may be supposed to have excited, its object is greatly mistaken.

Those whom your proclamation holds forth as marks of public vengeance, neither prompted the British nor aided the execution of it. On the contrary, they expressed the greatest indignation at it, and with all their power strove to mitigate our sufferings. Still some instances attended which made the execution of it less distressing to us than yours must be to those upon whom it is intended to operate. We were ordered withoutoutside of the British lines and then our friends were ready to receive us. They received us with a cordial welcome, and ministered to our wants with generosity and politeness. With pleasure we bear this public testimony. But our Town women now ordered out must be exposed to the extreme of human wretchedness. Their friends are in Charles Town; they have neither carriages nor horses to remove them by land, nor vessels to transport them by water, and the small pittance allotted them of their property, could they be procured, would be scarce equal to the purchase of them. It is beneath the character of the independent State of North CarolinaThe word "independent" is important. It's an appeal to those in power to remember that they are free from the control of others and not under constraint or force to mistreat their own. to war with women and children. The authors of our ill treatment are the proper subjects of our own and the resentment of the public. Does their resentment barbarity strike us with abhorrence? Let us blush to imitate it; not justify by our own practice what we so justly condemn in others. To Major Craig, and him alone, is to be imputed the inhuman edicts, for even the British Soldiers were shocked at it.

If we may be allowed to claim any merit with the public for our steady adherence to the Whig principles of America; if our sufferings induced by the attachment have given us favor and esteem with your honorable body, we beg leave to assure you that we shall hold it as a very signal mark of your respect for us if you will condescend to suffer to remain amongst us our old friends and acquaintances whose husbands, though estranged from us in political opinions, have left wives and children much endeared to us, and who may live to honor the State and to Society if permitted to continue here. The safety of this State, we trust in God, is now secured beyond the most powerful exertions of our Enemies, and it would be a system of abject weakness to fear the feeble efforts of women and children.

And as in Duty bound we shall ever pray.

This letter was written in response to an order made by the governor and his council. The order called for loyalist families to leave North Carolina within 48 hours of notification. The writers of the letter believed that this order was in response to and revenge for earlier mistreatment of Patriots during the 1781 occupation by British forces." data-share-imageurl=""> 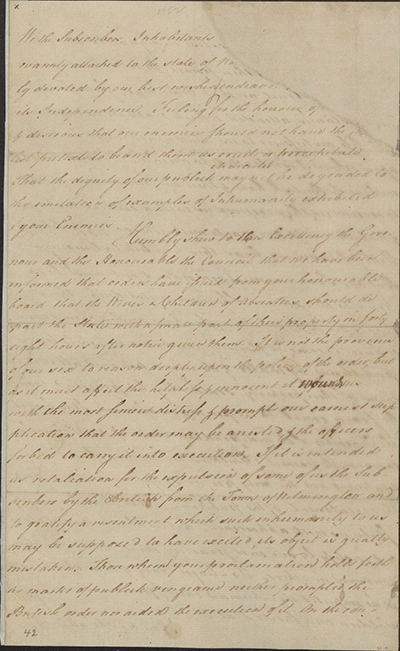 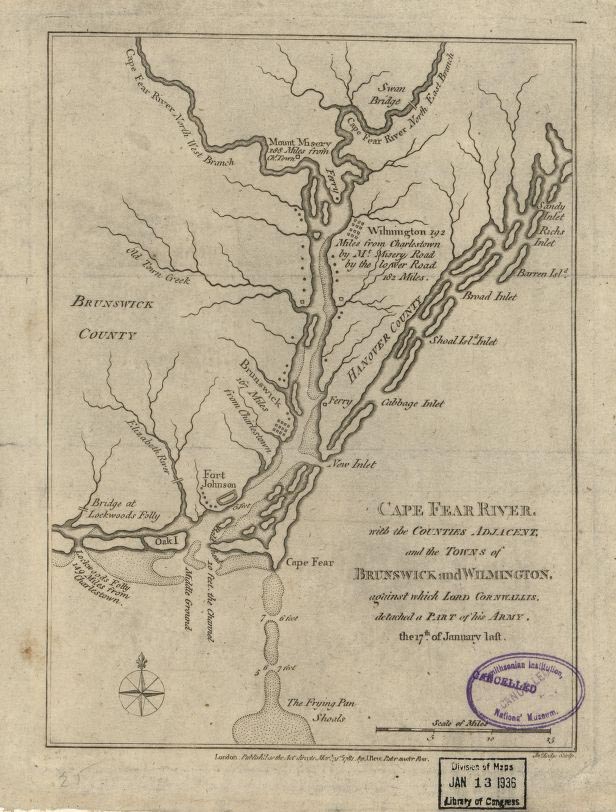