Tariffs and new territories of the 1800s intensified tensions between the Northern and Southern states. The election of Abraham Lincoln in 1860, however, was the breaking point for many southerners who felt that their interests were no longer represented by the federal government. In December of 1860, South Carolina officially seceded from the Union, leaving the other Southern states with decisions to make.

Within North Carolina, secession was a point of contention. Below are excerpts of journals and letters diplaying the dissonance between North Carolinians on the subject of secession.

Catherine Anne Devereux Edmondston was the daughter of a wealthy eastern North Carolina planter. In 1846 she married Patrick Muir Edmondston, a South Carolinian, and they eventually settled on a plantation in Halifax County, North Carolina, where they were living in 1860. In June of that year Mrs. Edmondston began a journal in which she recorded her thoughts and observations of current events. Below are excerpts from her journal where she discusses interactions with others who either supported or opposed secession.

Mr. Miller Edmondston's brother-in-law. seems to have an especial spite against Slave holders; asks in a tone of acrimony and bitterness if 'we expect the West and the white population who have none, to fight for our negroes?' 'Certainly I do.'

Sister Frances is a terrible Unionist! Right or wrong, this 'Glorious Union' is every thing. Now it is no longer glorious -- when it ceases to be voluntary, it degenerates into a hideous oppression. Regret it heartily, mourn over it as for a lost friend, but do not seek to enforce it; it is like galvanizing a dead body.

It gets almost painful to go to Father's we differ so widely. He it is true says nothing personal or unhandsome, but he censures so sweepingly every thing that SC does. Mama & Susan do go on so about the 'Flag.' Who cares for the old striped rag now that the principle it represented is gone? It is but an emblem of a past glory. How can it be upheld when the spirit -- nay even the body -- that gave it value is lost?

Today was inaugurated at Montgomery Jefferson Davis, President of the Confederate States of America, consisting of the states of South Carolina, Georgia, Florida, Alabama, Mississippi, Louisiana & Texas. O that North Carolina would join with her Southern sisters -- sisters in blood, in soil, in climate & in institution.

William A. Graham held a number of prominent positions prior to 1860, including governor of North Carolina, United States senator, and Secretary of the Navy. He owned several plantations worked by slave labor. Below is an excerpt from a letter he wrote to Alfred M. Waddell, who at the time was serving as clerk of court in Wilmington and opposed secession.

It is well known that I am far from believing his election The election of Abraham Lincoln as president merely is a cause for abandonment of the Government of our Fathers, and especially for its overthrow by unlawful violence ... All such proceedings are based on the mistaken supposition, that the Government is a monarchy, and the President a sovereign to whom we owe allegiance, and who may regulate and influence our destinies at his pleasure, whereas he is but the chief servant among those of the national household.

John Willis Ellis was the governor of North Carolina from 1858 to June 1861. Below are excerpts of letters he wrote to Robert Gourdin, and Isham W. Garrott. Gourdin was a South Carolinian secessionist who signed the 1860 Ordinate of Secession of South Carolina. Garrott was a North Carolina native who had moved to Alabama and was sent back to his home state by Alabama Governor Andrew B. Moore to encourage the North Carolina General Assembly to support secession.

The Legislature of North Carolina will almost certainly Call a Convention. There is a fierce opposition here to Southern rights, growing mainly out of old party divisions, but we will overcome it. The people are fully alive to their interests.

John Willis Ellis to Isham W. Garrott of Alabama, January 30,1861  Alabama seceded from the Union on January 11, 1861; North Carolina had not seceded at the time Willis was writing to Garrott.

The abolitionists will continue to amuse us with hopes of compromise without any real purpose to make a Substantial Settlement. They are Seeking time, within which to get control of the army and navy and the powers of the government. They will make a strenuous effort to detach the Southern States from you, but rely upon it the Southern rights men in North Carolina will never desert you. We have SubmissionistsThat is, people who would submit to the Union, or Unionists. here but the great heart of the people is right. You may count us in for we are determined to be with you Soon.

Zebulon B. Vance was serving in the United States Congress and advocating for maintenance of the Union when he wrote this letter to William Dickson, a member of the House of Commons from Caldwell County, in 1860. Little did Vance know that two years later he would be North Carolina's Civil War Governor.

The Whole Southern mind is inflamed to the highest pitch and the leaders in the disunion move are scorning every suggestion of compromise and rushing everything with ruinous and indecent haste that would seem to imply that they were absolute fools -- Yet they are acting wisely for their ends -- they are "precipitating" the people into a revolution without giving them time to think -- They fear lest the people shall think... But the people must think, and when they do begin to think and hear the matter properly discussed they will consider long and soberly before they tear down this noble fabric and invite anarchy and confusion, carnage, civil war, and financial ruin with the breathless hurry of men flying from pestilence ... If we go out now we cant take the army and the navy with us, and Lincoln could as easily employ them to force us back as he could to prevent our going out ... We have everything to gain and nothing on earth to lose by delay, but by too hasty action we may take a fatal step that we never can retrace -- may lose a heritage that we can never recover 'though we seek it earnestly and with tears.'

Jonathan Worth was serving as a state senator in 1861. These two letters from Worth were written in May of 1861 during the uncertain weeks between the first shots of the Civil War at Fort Sumter (April 12) and North Carolina's secession from the Union (May 20).

I have been the most persevering and determined public man in my State to preserve the Union -- the last to abandon the hope, that the good sense of the Nation would prevent a collision between the extremes, each of which I viewed with equal abhorrence. I am left no other alternative but to fight for or against my section. I can not hesitate. Lincoln has made us a unit to resist until we repel our invaders or die. I can see no hope in the future, whatever may be the issue of the fight, Elsewhere Worth says, "Slavery thus far has only be a pretext for this sectional contest. The multitude, North and South, regard it as a cause." and, "Whether this was (Lincoln's) design in order to make war upon slavery, or his purpose only what he professes, we are in doubt."  which now seems inevitable. The best chance for ultimate re-union would be a peacable separation ...

Will you please let me know how accts. stand between me and you? I intend to pay the little I owe North and South, if I can be permitted to do so without being a traitor.

I have been forced by surrounding facts to take sides, or rather front, with my section. I regard a prudent peace, even accompanied with the contemplated secession of the State, and her union with the Confederate States, as preferable to a civil war on a gigantic scale; but I have not a particle of confidence in the wisdom or patriotism of the new rules to whom we submit. I leave the Union and the flag of Washington because I am subjected and forced to submit to my master -- democracy, destisting it with more and more intensity, as I become better acquainted with its leaders and its objects. I still believe that no respectable and stable government can ever be established in America, except on the plan of a Union, such as that we are wickedly and foolishly overthrowing ...

I think the South is committing suicide, but my lot is cast with the South and being unable to manage the ship, I intend to face the breakersBreaking (crashing) waves, as would threaten a ship. manfully and go down with my companions. 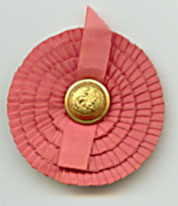 In 1861, many citizens of North Carolina wore cockades to show their support for secession from the Union. A cockade is a knot of ribbons usually worn on a hat. This cockade, circa 1861, consists of red ribbon surrounding a brass button.