From the North Carolina Gold-Mine Company

This first-hand account of North Carolina’s gold rush provides more detail about the geology of the region and the early work of mining. Note the story about the initial discovery of gold, which is different from the accounts in the historical articles in this chapter! The author, William Thorton, would have heard the story by word of mouth, and stories can often change in the telling.

Having heard many accounts of the gold mines in North Carolina, and of the large pieces of pure gold found there, which surpass any specimens of pure virgin gold"Virgin gold" is metal that comes directly out of the ground instead of from pieces of gold that have already been used to make jewelry, coins, or other objects. For example, a gold ring that was melted down and made into two ear rings would not be virgin gold. The term could also refer to larger pieces of gold that require very little effort to extract. Gold flakes or dust, by contrast, must be removed from the surrounding rock using chemicals. existing in the richest cabinets in the world, I was induced to take a journey of about 450 miles, to examine into all the circumstances that gave rise to such extraordinary reports. I arrived at Concord, and found that so many of the inhabitants had seen pieces of the pure metal of various pounds weight, one amounting to twenty-eight, that there could be no longer any doubt of the truth of the accounts. I went from Concord, or Cabarrass court-house, to the mines and examined them several days, in various directions, taking with me only country guides, and I found the beds where the gold was discovered, were extensive beds of gravel, which were covered with water in the winter months, but dry in the summer. These beds of gravel are principally quartz, with slate, schist, and some imperfectly formed graniteQuartz is a white mineral abundant in most Piedmont rocks. Slate and schist are metamorphic rocks. Slate is very fine-grained, commonly black, gray, and greenish-gray and can be easily split into smooth flat surfaces. Schist is coarser-grained and contains mica and sometimes garnet. Granite is a white, gray, or pink igneous rock that contains quartz, feldspar, and black minerals called biotite.; the sand is mingled with micaMica is a general term for two common minerals, muscovite and biotite. Muscovite is white, while biotite is black. These minerals are platy and often shiny or submetallic in appearance.; they rest on a bed of black or bluish argillaceousArgillaceous earth is sediment made up mainly of clay mixed with a little bit of the mineral quartz. These sediments form by the weathering of mudstones or deposits of fine-grained materials transported by rivers or streams. earth. They are from thirty or forty to about a hundred feet wide, and wind round the hills, which rise in all forms, in angles from twenty to fifty or sixty degrees, and about a hundred feet high. These hill are of gravel, mixed with quartz, some of it remarkably fine and perfectly white, some redish, and some inclining to yellow, also with siliceous sandSiliceous sand means a sediment that is composed primarily of the mineral quartz. These often form due to the weathering of sandstones or granites on the surface of the earth. and mold. In some of the hills are small salt licksAnimals (including humans) need salt to survive, but in the wild salt can be hard to find. A salt lick is a deposit of salt where animals such as deer come to lick up the minerals., to which the deer, which are numerous, and wild cattle resort. The grounds are covered with all the common forest trees of the more northern states, mixed with about one-tenth or twentieth of pine; and the forests abound with the beautiful sour wood (Aesculus hypocastinum.)

The hills where the gold is found, are not well watered in summerThis means that the rivers and creeks run low or dry in the summer, or that there is not much rain in the summer months., but the inhabitants are remarkably healthy. The grounds are exceedingly well adapted to cotton, which makes an astonishing turn, corn, wheat, rye, &c. Peach and other fruit trees flourish remarkably also : indeed many of the people make hedges of peach trees, which they keep cut and in order.

The manner of searching for the gold is to take shovels or spades and turn over the gravel, always advancing as it is turned back, and picking up what is discoverable by the eye. in doing this, however, thousands of small grains are lost, which the fingers cannot separate from the sand, and by taking what has been rejected, and working it with quicksilverQuicksilver is mercury, a silver-colored liquid. (An old sense of the word quick meant alive or lively, and mercury looked like silver that moved or was lively.) Mercury was once widely used and handled, but today we know that mercury can be absorbed through the skin, and that mercury poisoning can severely damage the brain, lungs, and kidneys. Mercury bonds with gold particles, and so using it increased the amount of gold miners could recover. Quicksilver were used in gold mining in North Carolina from the 1830s through the 1860s. We don't know how much was used, but there is evidence that elevated levels of mercury are still present in the soil in that region of the state. See this article (available in PDF) about research at East Carolina University on mercury contamination in the Gold Hill mining district., large quantities might be obtained; but while the vallies are so extensive and such large pieces are discoverable, they will not descend to any chymical though simple operation.

The first mine was found by a son of Mr. Reed, who, in watering his horse at the creek, discovered a piece of gold, and picked it up. It lay in his father’s house nearly two years, and by advice he took it to a silver-smith, who informed him it was pure gold. Mr. Reed took three partners, who agreed to advance all the money and forcethe workforce, or workers requisite to carry on the search for gold, and that he should draw one quarter of the metal. They supplied each two black boys, after their crops were put into the ground and the streams dried up, who dug in the manner above related, with such success, that in six weeks, during two separate years, they produced to the proprietors between fourteen and twenty thousands dollars, besides what was stolen from these PactoleanPactolus is a river now in present day Turkey. Historically, it was believed that the river contained a lot of gold. streams, amounting, as some conjecture, to half as much more. No regular attempt has yet been made by the company to open the hills which dip into these beds of gold. They are unacquainted with the subject of mining, and have judiciously contented themselves with taking what is so much in their power, and which costs them so little labour, that every negro boy returned to the proprietors above sixteen dollars a day, upon an average, according to a calculations of the return, and the time of their working, as stated to me by some of the company: I asked one of the proprietors of Reed’s mine, how much he would take for these share (one quarter)? He informed me not less than forty thousands dollars. 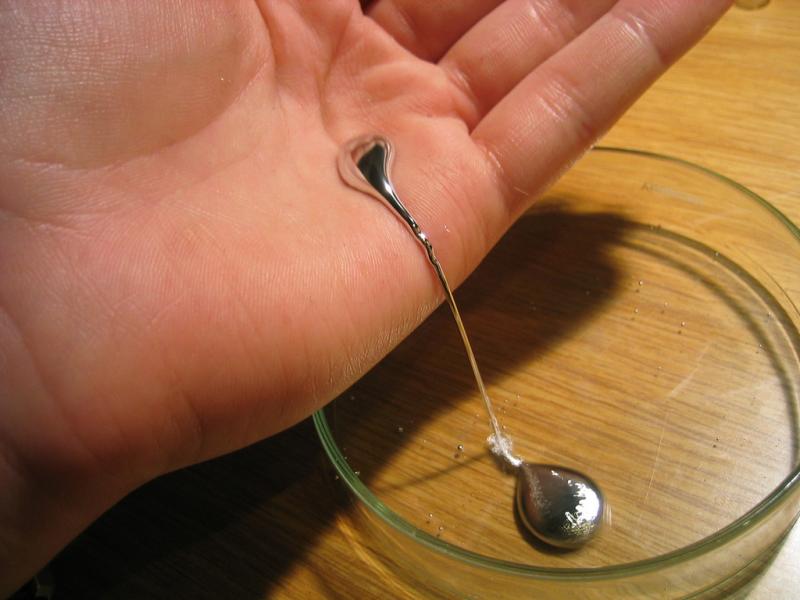 The toxic metal mercury is also called quicksilver because it is liquid at room temperature and flows quickly from one spot to another. Mercury was used to mine gold during the North Carolina gold rush.