John Lawson's Assessment of the Tuscarora

By the early 1700s, colonial settlers and native peoples had a century of contact. Colonial settlements were evergrowing and trade between settlers and natives was not uncommon. In his 1709 publication A New Voyage to Carolina, John Lawson wrote extensively about the natives and settlers' interactions with them. Below is an excerpt where Lawson discusses the Tuscarora in a mostly positive light, aside from their "aversion to Christianity."

Now, as I before hinted, we will see what grounds there are to make these People serviceable to us,Lawson's goal is clear: He wants to make the Indians "serviceable" to the English colonists -- helpful and cooperative. Though Lawson was respectful of Carolina's native peoples and their cultures, he wanted them to convert to Christianity and assimilate into colonial society -- blend into it and adopt English ways. But Lawson also genuinely believed that the Indians would be better off with English religion and culture. and better themselves thereby.

On a fair Scheme, we must first allow these Savages English writers used the term savage to refer to any native person who had not converted to Christianity. Although the term was hardly a compliment, Lawson didn't mean to imply that Carolina's Indians were particularly violent or bloodthirsty. what really belongs to them, that is, what good Qualities, and natural Endowments, they possess, whereby they being in their proper ColoursThat is, when they are presented in their "true colors" or the way they really are., the Event may be better guess'd at, and fathom'd.

First, they are as apt to learn any Handicraft, as any People that the World affords; I will except none; as is seen by their Canoes and Stauking HeadsIn his journal entry of Thursday, January 9, 1701, Lawson provides a detailed description of an Indian's "stalking head," the hollowed-out head of a male deer worn when hunting., which they make of themselves; but to my purpose, the Indian Slaves in South Carolina, and elsewhere, make my Argument good.

Secondly, we have no disciplin'd Men in Europe, but what have, at one time or other, been branded with Mutining, and MurmuringHere, to murmur against someone is to complain quietly about them or to plot secretly against them. against their Chiefs. These Savages are never found guilty of that great Crime in a Soldier; I challenge all Mankind to tell me of one Instance of it; besides, they never prove Traitors to their Native Country, but rather chuse Death than partake and side with the Enemy.

They naturally possess the Righteous Man's Gift; they are Patient under all Afflictions, and have a great many other Natural Vertues, which I have slightly touch'd throughout the Account of these Savages.

They are really better to us, than we are to them;This isn't an especially harsh condemnation, but it's often quoted, because Lawson was one of very few Englishman to point out how badly the colonists treated native Carolinians. they always give us Victuals at their Quarters, and take care we are arm'd against Hunger and Thirst: We do not so by them (generally speaking) but let them walk by our Doors Hungry, and do not often relieve them. We look upon them with Scorn and Disdain, and think them little better than Beasts in Humane Shape, though if well examined, we shall find that, for all our Religion and Education, we possess more Moral Deformities, and Evils than these Savages do, or are acquainted withal.

We reckon them Slaves in Comparison to us, and Intruders, as oft as they enter our Houses, or hunt near our Dwellings. But if we will admit Reason to be our Guide, she will inform us, that these Indians are the freest People in the World, and so far from being Intruders upon us, that we have abandon'd our own Native Soil, to drive them out, and possess theirs; neither have we any true Balance, in Judging of these poor Heathens, because we neither give Allowance for their Natural Disposition, nor the Sylvian Education, and strange Customs, (uncouth to us) they lie under and have ever been train'd up to; these are false Measures for Christians to takeHere Lawson accuses his countrymen of not behaving like Christians. So while he would have liked to see Indians converted to Christianity, he also blames the English for not converting them or setting an example of Christian behavior., and indeed no Man can be reckon'd a Moralist only, who will not make choice and use, of better Rules to walk and act by: We trade with them, it's true, but to what End? Not to shew them the Steps of Vertue, and the Golden Rule, to do as we would be done by. No, we have furnished them with the Vice of DrunkennessMost Native Americans did not make or drink alcohol before Europeans arrived, but it quickly became a valuable commodity in trade. Since alcohol had no place in native cultures and there were no social rules or guidelines to limit its use, many Indians abused alcohol. It isn't surprising that alcohol abuse could be a problem at a time when disease and European colonization were wiping out native communities and forcing Native Americans off their land. It's also important to note that white settlers at this time consumed massive quantities of alcohol by today's standards. At the end of the eighteenth century, the average adult male drank a half-pint of hard liquor every day, and what we would now call binge drinking was expected at social gatherings. Throughout the 1700s, Native leaders asked colonial officials to stop the trade in alcohol. Most colonies passed laws against it at one time or another, but colonial laws were hard to enforce, and traders looking for quick profits easily found ways around the law., which is the open Road to all others, and daily cheat them in every thing we sellA common practice among European traders was to give Native Americans alcohol, get them drunk, then buy their goods (such as furs) for far less than they were worth., and esteem it a Gift of Christianity, not to sell to them so cheap as we do to the Christians, as we call our selves. Pray let me know where is there to be found one Sacred Command or Precept of our MasterJesus., that counsels us to such Behaviour? Besides, I believe it will not appear, but that all the Wars, which we have had with the Savages, were occason'd by the unjust Dealings of the Christians towards them. I can name more than a few, which my own Enquiry has given me a right Understanding of, and I am afraid the remainder (if they come to the test) will prove themselves Birds of the same Feather.

As we are in Christian Duty bound, so we must act and behave ourselves to these Savages, if we either intend to be serviceable in converting them to the Knowledge of the Gospel, or discharge the Duty which every Man, within the Pale In this context, "pale" means limits or boundaries -- hence the saying "beyond the pale." of the Christian Church, is bound to do. Upon this Score, we ought to shew a Tenderness for these Heathens under the weight of Infidelity; let us cherish their good Deeds, and, with Mildness and Clemency, make them sensible and forwarn them of their ill ones; let our Dealings be just to them in every Respect, and shew no ill Example, whereby they may think we advise them to practise that which we will not be conformable to ourselves: Let them have cheap Penniworths (without Guile in our Trading with them) and learn them the Mysteries of our Handicrafts, as well as our Religion, otherwise we deal unjustly by them. But it is highly necessary to be brought in Practice, which is, to give Encouragement to the ordinary People, and those of a lower Rank, that they might marry with these Indians, and come into Plantations, and Houses, where so many Acres of Land and some Gratuity of Money, (out of a Publick Stock) are given to the new-married Couple; and that the Indians might have Encouragement to send their Children Apprentices to proper Masters, that would be kind to them, and make them Masters of a Trade, whereby they would be drawn to live amongst us, and become Members of the same Ecclesiastical and Civil Government we are under; then we should have great Advantages to make daily Conversions amongst them, when they saw that we were kind and just to them in all our Dealings. Moreover, by the Indians Marrying with the Christians, and coming into Plantations with their English Husbands, or Wives, they would become Christians, and their Idolatry would be quite forgotten, and, in all probability, a better Worship come in its Stead; for were the Jews engrafted thusThat is, if Jews were grafted or inserted into Christian society., and alienated from the Worship and Conversation of Jews, their Abominations would vanish, and be no more.

Thus we should be let into a better Understanding of the Indian TongueLanguage., by our new Converts; and the whole Body of these People would arrive to the Knowledge of our Religion and Customs, and become as one People with us. By this Method also, we should have a true Knowledge of all the Indians Skill in Medicine and SurgeryAt times, Lawson praised Native medicine as being more effective than European medicine.; they would inform us of the Situation of our Rivers, Lakes, and Tracts of Land in the Lords Dominions, where by their Assistance, greater Discoveries may be made than has been hitherto found out, and by their Accompanying us in our Expeditions, we might civilize a great many other Nations of the Savages, and daily add to our Strength in Trade, and Interest; so that we might be sufficiently enabled to conquer, or maintain our Ground, against all the Enemies to the Crown of England in America, both Christian and Savage.

Now, as I before hinted, we will see what grounds there are to make these People [qtip:serviceable to us,|Lawson's goal is clear: He wants to make the Indians "serviceable" to the English colonists -- helpful and cooperative." data-share-imageurl=""> 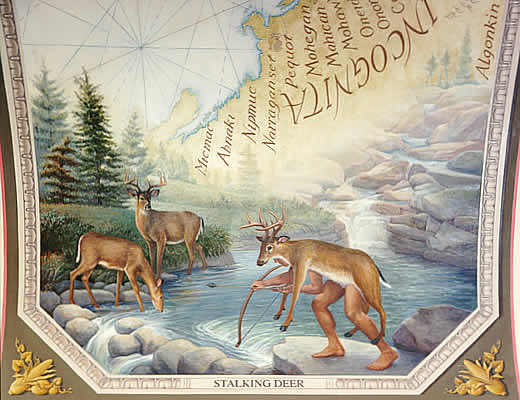 The stalking head Lawson praises was a deer head and skin worn by a hunter to camouflage himself while hunting.